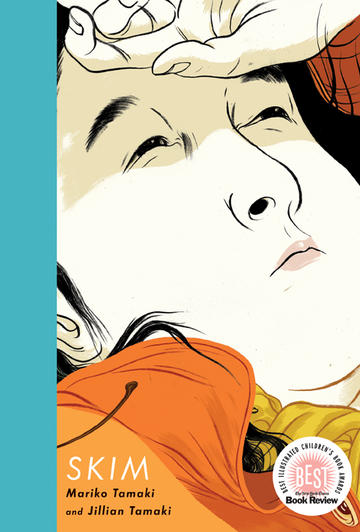 A New York Times Book Review choice as one of the 10 Best Illustrated Children's Books of 2008.

Skim is Kimberly Keiko Cameron, a not-slim, would-be Wiccan goth stuck in a private girls' school in Toronto. When a classmate's boyfriend kills himself because he was rumoured to be gay, the school goes into mourning overdrive, each clique trying to find something to hold on to and something to believe in. It's a weird time to fall in love, but that's high school, and that's what happens to Skim when she starts to meet in secret with her neo-hippie English teacher, Ms. Archer. But when Ms. Archer abruptly leaves, Skim struggles to cope with her confusion and isolation, armed with her trusty journal and a desire to shed old friendships while cautiously approaching new ones.

Depression, love, sexual identity, crushes, manipulative peers —teen life in all its dramatic complexities is explored in this touching, pitch-perfect, literary graphic masterpiece. Cousins Mariko and Jillian Tamaki collaborate brilliantly in this poignant glimpse into the heartache of being sixteen.

JILLIAN TAMAKI is a cartoonist and illustrator from Calgary, Alberta, who now lives in Toronto, Ontario. Her first picture book, They Say Blue, won the Governor General’s Literary Award and the Boston Globe–Horn Book Award, among many other accolades. She co-created the highly acclaimed graphic novels Skim and This One Summer with Mariko Tamaki, and she is the creator of the webcomic SuperMutant Magic Academy, and Boundless, a collection of short comics for adults. She has won many awards for her work, including a Caldecott Honor, a Printz Honor, the Eisner Award, the Doug Wright Award and the Ignatz Award. Her work has also been named to the list of New York Times Best Illustrated Children’s Books.

Mariko Tamaki is a Toronto-based writer and performer — "a talented writer getting better and better," says Now Magazine. She is the author of Cover Me, True Lies and the Book of Bad Advice and Fake ID. Mariko grew up in Toronto, where she attended a private school very much like Skim's.

Jillian Tamaki grew up in Alberta and currently lives and works in New York, where her clients include the New York Times, the New Yorker, the Washington Post, Entertainment Weekly, the Walrus, Macleans and the Village Voice. She has received a number of awards for her editorial illustrations, including a National Magazine Award, and her work has appeared in the American Illustration and Communication Arts annuals. Her first book, Gilded Lilies, was published by Conundrum Press in 2006 and was nominated for a 2007 Doug Wright Award in the Best Book category.

...[Skim is a] stunningly emotional graphic novel...an artful jumble that is as true-to-life as it is diffuse...unfussy and immediate...The delicately lined art alternately expands and contradicts the prose to achieve layers of meaning, tone and irony...With honesty and compassion, this innovative narrative communicates a life just beginning, open and full of possibility.

No medium can capture the sense of being plunged into another person's mind like comics can, and Skim is the perfect example, its words and pictures and storytelling so unified in conjuring Kim's world that it comes as a surprise to see it has two creators rather than one...The careful layering of perception, desire, and reality is handled so deftly that the effect is almost subliminal...The Tamakis have done the hardest and most rewarding thing an artist can do: they have captured the texture of real life and made it into something beautiful.

[Skim] is bringing kudos to Canadian children's book publisher Groundwood Books for its poignant and funny portrayal of a teenage girl...[Jillian Tamaki's] monochromatic ink drawings with their fluid lines add powerful cinematic storytelling to [Mariko Tamaki's] minimalist text...Jillian's ability to catch the gestures and body language of the private school girls in their plaid skirts and knee socks equals Mariko's well-attuned ear for dialogue. The combination of words and images makes Skim a fully rounded and memorable character struggling with a welter of confused feelings...we feel for her...[Jillian Tamaki] has won several awards. It seems a sure bet that Skim will garner her a few more.

...avoids all the cliches of a coming-of-age story...Original in every which way.

The tricky part with graphic novels is getting the story to be as good as the drawings, and [the Tamakis] have figured out a winning combination for sure. The story is riveting and will bring you right back to 11th grade angst within the first few pages. Jillian Tamaki has an especially expressive, loose style that lends itself beautifully to this slightly morose tale.

...brilliantly told and illustrated coming of age tale that will appeal to young readers and adults alike. This book deals with a number of themes that are relevant to teenagers (including suicide, parental separation, youthful alienation, the journey to finding oneself, love, and many others). The story is told in a way that is hilarious and heart-breaking in equal measure.

A quietly moving graphic novel...sharply witty and incisive...Long, languid lines portray Skim's turmoil and angst with pitch-perfect resonance...Recommend this to fans of Daniel Clowes's Ghost World, who have been waiting for another graphic novel of teen angst and suburban ennui.

[Skim uses] high school as a fertile setting for pungent commentary on racial, cultural, and sexual issues...The narrative, mainly in diary form, feels accurate and realistic, drenched in a sense of confusion and nihilism, and the art, influenced by Craig Thompson's Blankets (2003), reflects the spare, gloomy emotional landscape in which Skim exists. This story will appeal to many female comics fans...

...[Skim] manages to avoid the usual cliches...The b/w cirt is fluid and curvy and looks like it came straight out of a sketchbook. The little details are wonderful...Highly recommended for high school graphic novel colelctions, especially those catering to girls.

Stunningly drawn, [Skim] brilliantly charts the deep and sometimes desperate conflicts and moods that prevail in teen years...Easily accessible, it gives a sympathetic and realistic view of adolescence.

...traverse[s] the turbulent landscape of high school with tenderness and a keen eye for the yearning of adolescent girls...From the particularities of slang to the bigger concepts like fear and isolation, Mariko and Jillian Tamaki capture the subtle details that comprise this understated part of life...a world [in] which anyone who has ever been a teenager would be able to relate to at some level...Jillian Tamaki's use of line and shadow is effective in rendering the psychology of characters and the moody spaces they find themselves in...Formally, Skim is interesting for its varied approach to panel-use. Some pages flaunt over 10 similarly sized and shaped panels while others reveal only one (often silent) borderless image. The overall effect reveals impressive artwork and many powerful scenes...Skim is a unique piece, one not to be missed. Highly Recommended. [Skim uses] high school as a fertile setting for pungent commentary on racial, cultural, and sexual issues...The narrative, mainly in diary form, feels accurate and realistic, drenched in a sense of confusion and nihilism, and the art, influenced by Craig Thompson's Blankets (2003), reflects the spare, gloomy emotional landscape in which Skim exists. This story will appeal to many female comics fans...

Skim comes out on top...connects in every way...This graphic novel is a winner...a unique creation...Scenes are often hilarious and black-humoured as well as serious...Mariko Tamaki's prose captures an authentic adolescent voice that's dramatic, self-obsessed, funny, earnest, and sometimes glib...Skim is an unforgettable character in the tradition of Holden Caulfield-a clear social commentator on adult and adolescent behaviour whose ironic observations on social hypocrisy ring sharp and true...Illustrator Jillian Tamaki's fine draughtsmanship gives Skim a classic elegance that's missing in many other graphic novels...a powerful sense of mystical eeriness that deepens and enhances the story. Skim is a funny, poignant, memorable drama of navigating adolescence.

...an auspicious graphic novel debut by cousins Mariko and Jillian Tamaki...It's Jillian's artwork that sets it apart from the coming-of-age pack. Jillian has a swooping, gorgeous pen line-expressive, vibrant and precise all at once...evocative and wondrous...It complements Mariko's fine ear for dialogue and the incidentals and events of adolescent life. Skim is an unusually strong graphic novel-rich in visuals and observations, and rewarding of repeated readings.

This stunning coming-of-age novel will draw in not only GN buffs, who will appreciate the creative design and dramatic use of both illustration and narration, but also realistic-fiction fans who may not normally gravitate to the format but will find this a sympathetic standout.

— Bulletin of the Center for Children's Books

...rendered delicately...Mariko's writing is assured...Skim's self-searching entries are wrenched off or lit up by the next image...Skim comes into its own, building a teenage girl mood that's struggling observant and shyly heartfelt by turns.

Skim is a wonderful example of the potential of graphic novels to be both gripping and heartbreaking, proving their ability to act as social commentary on issues such as race, gender and sexuality amidst the callous backdrop of high school. This first collaboration proves that Mariko and Jillian Tamaki undoubtedly have the potential to mould the future of graphic novels, providing young women with thought-provoking and visually pleasing fiction.

A gorgeous, poetic pen line and sharp dialogue bring this angsty story of a disaffected teenage girl to life.

...the expressionistic fluidity of the black and white illustrations serves the purpose of pages of prose, so that the laconic conversation of these girls and Skim's almost equally economical and intermittent diary entries ring true.

The Tamaki cousins in their first graphic novel take a huge fistful of high school story trappings and distill a beautiful and funny time capsule of real feeling... Skim is a refreshing reminder of the inevitability of change and the importance of looking beneath the surface.

[Skim] is a convincing chronicle of a teenage outsider who has enough sense to want to stay outside...All in all, Skim offers a startlingly clear and painful view into adolescence for those of us who possess it only as a distant memory. It's a story that deepens with successive rereadings. But what will teenagers think? Maybe that they've found a bracingly honest story by a writer who seems to remember exactly what it was like to be 16 and in love for the first time.

Writer Mariko Tamaki and artist Jillian Tamaki stunningly entwine their acute dialogues and visual riches in brush, soft pencil and grey tones, illuminating this adolescent romance in all its conflicted depths. [Skim is the] most sophisticated and sensitive North American graphic novel debut of the year.

The Tamaki cousins in their first graphic novel take a huge fistful of typical high school story trappings and distill a beautiful and funny time capsule of real feeling...striking black-and-white artwork flows in clear but soft, shaded line work...The visual storytelling is firm and often quite lovely...Skim is a refreshing reminder of the inevitability of change and the importance of looking beneath the surface.

Being able to tap into that visceral experience, warts and all, is what makes Skim such an amazing read...A powerful and poignant story that is as perfect a synergy of words and art as you're likely to find in comics, Skim is a true gem.

This beautifully rendered graphic novel portrays the confusion of adolescence and how it can lead to depression and experimentation.