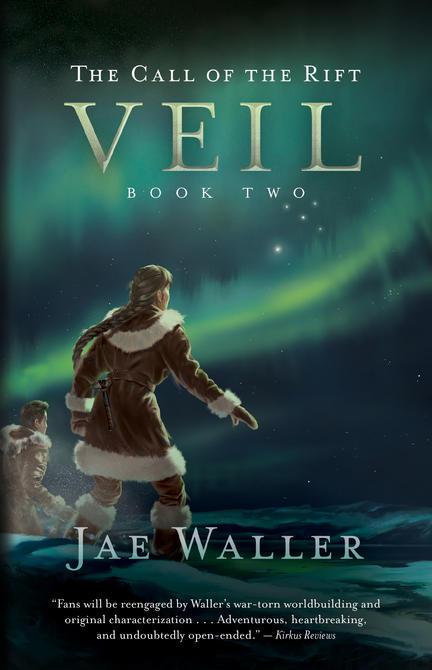 The Blackbird Battle has left all sides devastated. The wind spirit Suriel has disappeared. A hard winter is coming, and famine stalks the land. Kateiko Rin returns to her people, ready at last to rejoin her community, but the dangers of the unsettled times come raging to her doorstep. Kako is left with no choice but to battle the forces that seek to open a rift between the worlds. Leading an unlikely alliance that includes her new love Airedain and her old one Tiernan, Kako must risk all to try and stop the coming disaster.

Author Jae Waller returns to her riveting alternate world of brooding rainforests in a colonial time and to her headstrong, troubled heroine in this compelling second volume of the Call of the Rift quintet.

Excerpt: The Call of the Rift: Veil (by (author) Jae Waller)

A pair of rotting masts jutted up from the water’s surface. We steered around them, gliding over the shipwreck. Taut ropes still snapped in the current. Greenish-white sails billowed underwater. I couldn’t see deeper than the upper rigging, but when we’d passed it before, Ilani had swum down and found corpses and Sverba’s pale blue flag. I tapped two fingers to my forehead in salute.

Last winter, Suriel had sunk half the ships on this inlet in a windstorm. Rutnaast, the only major port between Ingdanrad and Toel Ginu, had fallen to a Corvittai attack the next day. Sea traffic had abandoned these waters after that, along with many of the area’s survivors. We’d seen just three intact ships our whole trip – a galleon carrying plows and harrows forged in Ingdanrad, a heron-prowed canoe from a southern jouyen, and a cod trawler.

Ilani stared into the cloudy water. “Think Wotelem would let me swim down again? There’s stuff to salvage.”

Esiad snorted. “Whatcha gonna do, porpoise girl? Haul crates up with your flippers?”

An osprey streaked across the grey sky. The bird dove and struck the ocean with a plume of water. A tanned woman broke the surface, flipping black hair out of her face. Mereku hauled herself into a canoe. “Ship coming,” she called.

The foremost canoe spun and looped back. We maneuvered together, holding each other’s boats so we didn’t drift apart. Wotelem, the Okoreni-Iyo and second-in-command of their jouyen, wound up next to me. Esiad dried Mereku’s clothes with a few waves of his hand.

“Armed and moving fast,” she said, shivering. “Shot crossbow bolts at me when I flew too close. Their shields have Suriel’s kinaru sigil.”

Dunehein swore. “Corvittai. Guess we only killed their army, not their navy.”

Esiad squinted back east. “They’re not here by accident. Someone in Ingdanrad must’ve sold us out. They don’t want us passing on what we’ve discovered.”

“In Veil, Jae Waller has once again created a rich, deep, magical, and moody atmosphere where whispers of British Columbia’s deep human history seep through.” — The Ormsby Review

“Well-written, Veil, a complicated tale, would be enjoyed by those readers interested in adventure with magic, shape-shifting (Kateiko can turn into a wolf) and warriors riding on large birds . . . Recommended.” — Canadian Review of Materials

Other titles by Jae Waller

The Call of the Rift: Wake

The Call of the Rift: Crest

The Call of the Rift: Flight