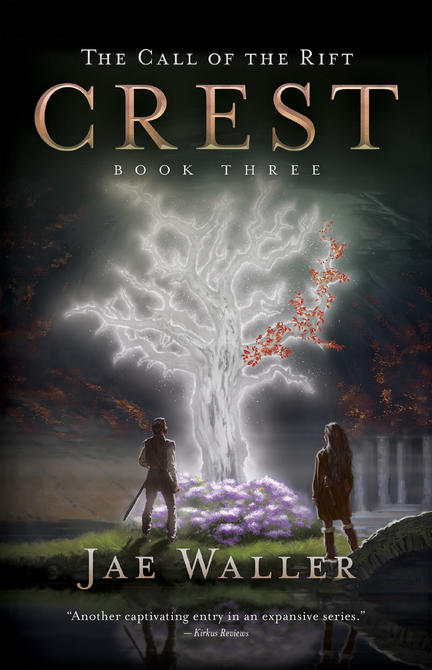 Step through the portal into a world ravaged by chaotic spirits and corrupted magic in the third book of The Call of the Rift high fantasy series.

Kateiko Rin lives a quiet life with her parents and her people in the coastal rainforest. Everything changes when her estranged uncle washes up on their shores, harried and half-dead, trailed by two blue-eyed children no one knew existed. To protect her family, Kateiko secrets away her young cousins. Caring for them includes hiding their ties to the Rúonbattai, a warlike cult trying to claim the land for themselves along with as many lives as they can. With the immigrant mage Tiernan and his companions Jorumgard and Nerio, Kateiko enters into the fray, facing strange, dangerous magic that unwinds the fabric of time. She must end the war before it tears the land, and her family, apart.

In the third book in The Call of the Rift series, Jae Waller invites us into another dimension and introduces an alternate version of her captivating heroine in a world full of familiar and unknown faces, including many we thought long dead.

Excerpt: The Call of the Rift: Crest (by (author) Jae Waller)

In the distance, a speck floated on the water, growing larger. It shifted on the left, right, left. Someone was paddling a canoe upriver toward us, but the motion was weirdly off pace.

“Let’s go back,” Onarem said. “I didn’t sign up for getting caught.”

“Kaid,” Rokiud swore. “They will be if they lose to the current. There’s rapids further down.”

Something yanked in my gut. This felt like a test from our ancestral spirits. A brave person would help, but a responsible person would obey the rules and turn back. Maybe I hadn’t attuned yet because I didn’t know which I was. I thought of the gouge in Rokiud’s canoe, imagining the stranger’s craft hitting a boulder.

Onarem dropped his protests when Nili told him to shut up. We paddled hard and soon neared the stray boat. Its prow was uncarved and tall enough to handle ocean swells. A man was slumped inside, clutching a paddle that dragged uselessly through foaming water. I grabbed at his canoe and missed. The current yanked it out of reach.

We’d nearly caught up again when the canoe disappeared around a bend. We rounded it, too, and hit rapids coursing through a ravine. Echoes roared off the rock walls. The stray canoe spun this way and that. Whitecapped waves struck its hull, rocking the man’s limp form.

“I’m going for it,” Rokiud yelled over the thunder of water. “Gonna need your help, Kateiko.” He yanked off his boots, dove into the river, and swam toward the stray canoe.

I kept paddling as I dropped my mind into the current, struggling to restrain it. Nili tossed Rokiud a rope. He looped it around the stray canoe’s prow. She hauled it in while Onarem kept them afloat, but rapids kept pulling the crafts in opposite directions. I called on as much water as I could, sweat running into my eyes, and guided all three canoes forward until the ravine widened to reedy banks.

Nili and Onarem tumbled ashore and pulled in the stray canoe. With a last surge of strength, I ran Rokiud’s canoe aground. The boys lifted the stranger and eased him onto the mud. He sagged, breathing shallowly, gripping his paddle like it was fused to his hands. One leg of his breeches was rolled up, exposing a sticky poultice over a crusted wound. I choked at the stench of infection.

Rokiud drew his fish knife and sliced open the man’s sleeve. Underneath was a kinaru tattoo. The man was Rin like us, yet I’d never seen his face. Neither had my friends, judging by their confused looks. I reached for his sleeve to tear it further and check his family crest.

“Stand back,” a voice commanded.

I whirled. Fendul stood on the riverbank. Birds landed around him and shifted to their human forms — an owl and falcon to Rin warriors, a black-billed swan to my dark-haired, tattooed mother. Rokiud and I backed up, hands raised.

My mother drew forward as if she was in a dream. She dropped to her knees and stroked the man’s hair. My eyes widened. No one in our confederacy would do that to a stranger. Touching someone’s hair, one of the sacred parts of the body along with the heart and blood, was an intimate act saved for relatives and loved ones.

Before I could find words, Nili bent over the man’s canoe, pulled back a tarp, and yelped. Huddled in a pool of river water were two shaking children.

“Another captivating entry in an expansive series.” — Kirkus Reviews

“This novel should appeal to those readers interested in adventure touched by magic in an exotic setting, and characters struggling with growing up in the midst of racism, warfare, and refugees.” — CM:Canadian Review of Materials

Other titles by Jae Waller

The Call of the Rift: Wake

The Call of the Rift: Veil

The Call of the Rift: Flight