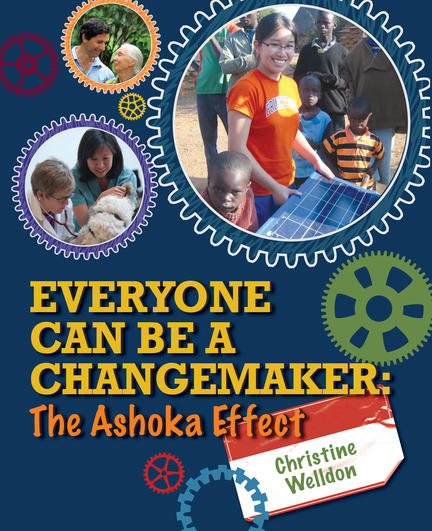 What is a Changemaker?

Answer: All of the above!

In this new addition to the Ripple Effects series (When Children Play, Pay It Forward Kids), you'll meet sixteen changemakers—boys, girls, men, and women. All of them are part of Ashoka, an organization that offers networking, mentorship, and financial aid to social entrepreneurs of all ages around the world. Each member strives to make a difference in the world, from animal rights to environmentalism, preservation of Aboriginal culture to food conservation, and you'll learn about how they've made global changes, the challenges they faced, and how you can start your own initiative!

Named after a famous Indian king of long ago, the Ashoka network was created as an agency to help and offer support to people who have a dream — people who want to build on their ideas, accomplish things and to make the world a better place one step at a time.

Ashoka is a network of social entrepreneurs who have all benefitted from the relationships they have had with other changemakers throughout the group — receiving their encouragement, advice and assistance.

This book looks at sixteen individuals who have accomplished amazing work from lighting jungle villages to building the perfect playground. The network offers mentorship and financial help to people from around the world so they can accomplish even more with their ideas and plans. It has helped more than 3000 social entrepreneurs in more than 70 countries through its mentoring programs including:

In addition to the inspirational features on the sixteen changemakers, Ashoka includes a section on how to get started being a changemaker along with a list of the things that can be done right now — to make a difference in the world we all live in.

"There is such variety in the projects that readers will easily find these accounts appealing, and uplifting, to read. The final chapter sums up the foundation philosophies of Ashoka: find your passion, start small, look at the big picture, be a listener, and remember difficulties can be overcome. The road to success may be through volunteering as well as by seeking help along the way. And there's a list of simple, accessible ways to make small changes right away. With so many opportunities to consider, Everyone Can Be a Changemaker will offer encouragement to anyone who believes a positive future is possible and necessary. From the opening quote by Mahatma Gandi — "Be the change you wish to see in the world" — the book would be a great discussion source for any group, and a catalyst for its members' ambitions.
Recommended — 4 Stars out of 5"
— CM Magazine

"Welldon has a style that is both engaging and thoughtful, and she avoids the trap of characterizing these changemakers as heroes coming in to save the day."
— Quill & Quire