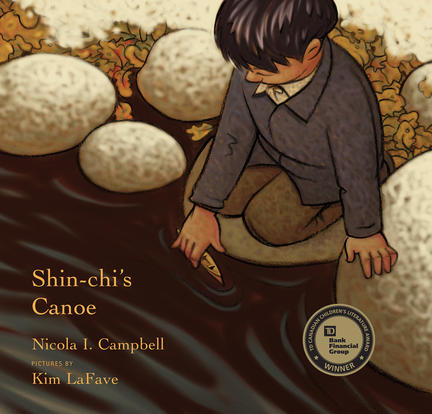 This moving sequel to the award-winning Shi-shi-etko tells the story of two children's experience at residential school. Shi-shi-etko is about to return for her second year, but this time her six-year-old brother, Shin-chi, is going, too.

As they begin their journey in the back of a cattle truck, Shi-shi-etko tells her brother all the things he must remember: the trees, the mountains, the rivers and the salmon. Shin-chi knows he won't see his family again until the sockeye salmon return in the summertime. When they arrive at school, Shi-shi-etko gives him a tiny cedar canoe, a gift from their father.

The children's time is filled with going to mass, school for half the day, and work the other half. The girls cook, clean and sew, while the boys work in the fields, in the woodshop and at the forge. Shin-chi is forever hungry and lonely, but, finally, the salmon swim up the river and the children return home for a joyful family reunion.

LaFave's striking yet soft digital illustrations are appropriately somber and deftly capture the mood with subtle earth tones on each page...This realistic, tender story [is] an accessible and important contribution to Native literature.

LaFave's digitally colored pencil sketches contrast the austerity of boarding-school life with the natural beauty of the children's home.

Kim LaFave's illustrations for this book are...bold and beautiful...an evocative accompaniment to a powerful text.

This book is an important addition to this literature with its intertwining of historical fact with an engaging narrative and evocative illustrations.

LaFave used archival photographs and discussions with elders in his research for the colour paintings that illustrate Campbell’s lyrical free verse recounting the experience of attending Indian Residential School from a child’s point of view. Shi-shi-etko is returning for her second year but this time her younger brother, Shin-chi, is going with her. Shishi-etko tells him all the things she has learned and tries to prepare him for the time away from home. Their father gives Shi-shi-etko a tiny carved canoe to take with her. She gives this to Shin-chi to help him remember what they have left behind. One day, feeling very homesick, Shin-chi sends the canoe out on the river knowing the current will take it back to his home. The story portrays the children’s resilience and patience.

This book is a sequel to Shi-shietko, which was co-winner of the Aboriginal Children’s Book of the Year. LaFave has illustrated many award-winning children’s books.

Source: The Association of Book Publishers of BC. Canadian Aboriginal Books for Schools. 2008-2009.

Shin-chi’s Canoe is a picture book to be shared by children and parents, but will certainly find a place in schools to help children understand a sad chapter in Canadian history. Nominated for the 2008 Governor General’s Literary Award for Children’s Literature (Illustration), Shin-chi’s Canoe picks up the story begun in the award-winning Shi-shi-etko. As summer closes, Shi-shi-etko waits to be picked up in a cattle truck and returned to residential school. This time she will be accompanied by her six-year-old brother, Shinchi, who clutches a tiny cedar canoe carved by his father. Like his sister, Shin-chi tries to memorize the mountain, the deer, his favourite fishing spots, to comfort him in months ahead. He and his sister must use their English names, speak only English and not talk to each other until the school year ends. Nicola I. Campbell’s clear prose and powerful images make the story of the residential schools accessible even to younger readers. Like Larry Loyie’s As Long as the Rivers Flow, this gentle story focuses not so much on the abuses of the schools, but on the strong connections to family, language, culture and land which the education system of the time tried to sever – with tragic effects.

Kim LaFave’s rich artwork was drawn on watercolour paper, then scanned and coloured using Corel Painter and Photoshop. His strong lines and compositions – often taking full advantage of two-page spreads – are the perfect complement to Campbell’s spare text. The warmth of a father’s embrace contrasts with the cold blues of the dormitory room in the junior boys’ wing. Regimented school life is portrayed in browns, with colour creeping in when two little boys get into mischief or Shi-si-etko and her brother manage to meet down by the river, waiting for the sockeye to swim up river and signal their return to their family and their home. As spring comes and freedom nears, Campbell’s telling becomes more lyrical. The excited children arrive home to find their father has prepared a surprise for them.

Shin-chi sets off for his first year at residential school. His sister, Shi-shi-etko, joins him for her second year there. En route to their destination, she tells him of the things from home he must remember while away and gives him a tiny toy cedar canoe, a gift from their father, which she instructs him to keep hidden. The days are long and lonely at residential school, but then summer arrives, the salmon swim upriver, and the children return home.

Other titles by Nicola Campbell

What's That Sound? At The Circus

Books About the Residential School System

Books to connect younger readers with the tragic legacy of Canada's residential schools.