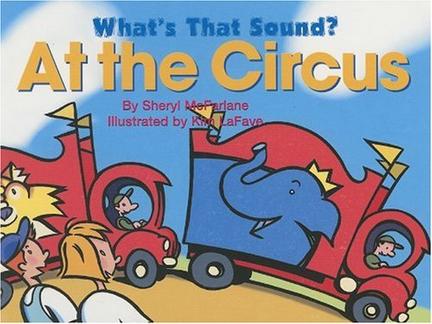 What does the circus sound like? Elephants THUNDER and THUMP, tigers ROAR, and a DRUM ROLLLLLL announces the flying trapeze.

These board books serve a dual purpose for inquisitive little ones. Not only do they link noises to objects but they encourage the association of meaning to letters on a page - the first, crucial step for developing reading skills

Sheryl McFarlane was born in the Ottawa Valley and was raised in Arizona, but the west coast snatched her heart more than thirty years ago. She is the mother of three wonderful daughters who often appear in her books in disguised form. She is the author of four board books and eight picture books, including: A Pod of Orcas, This is the Dog, Jessie's Island and Waiting for the Whales.
Sheryl's books have won and been short-listed for several readers' choice awards, the Governor General's Award, the IODE Award, the BC Book Prize for Children's Literature, and the Mr. Christie Award. Sheryl has toured with the Peter Gzowski Golf Tournament for Literacy, Save the Children, and The Canada Council. She has judged creative writing for The Writer's Union of Canada, The Canadian Children's Book Centre, and the BC Creative Writers' Grant Program, been a writer in residence in many schools, been involved in many young author programs, and has led children's writing workshops for beginning and established writers.
A former teacher, Sheryl provides professional development in language arts for school districts, Early Childhood Educators, Primary Educator Associations and the International Reading Association. She frequently acts as a consultant for publishers on both educational and trade projects. Her first young adult novel was published in the fall of 2006.

"What's That Sound? At the Circus is the perfect little board book. Its size is comfortable and accessible for hands of all sizes, and its bold colors are attractive and inviting. The story includes sights and sounds that captivate even the shortest of attention spans. . .

. . . It will quickly become a beloved favorite. The good news is there are three more in the series (In the City, On the Farm, By the Sea) and hopefully many more to come."
— Curled Up With a Good Kid's Book

From a review for both What's That Sound? At the Circus and What's That Sound? By the Sea by CM Magazine:
"These two new titles in the "What's That Sound" board book series are excellent introductions to descriptive sound words as well as springboards to discussions about the circus and the sea - both of which may be novel situations for toddlers. The illustrations in these two books are wonderful. LaFave has created eye-catching and colourful pictures with just enough detail to stimulate questions and discussion. . . These two books with their rollicking rhymes, loving endings, interesting illustrations, and invitations to cozy conversations are sure to be sought out whenever it is time for a good read."
Highly recommended.
— CM Magazine

"What's that Sound? At the Circus is full of sounds to delight the ears of the youngest readers. The board book helps them link noises to objects and encourage them to associate meanings with letters on the page."
— The Examiner (Peterborough)

"Toddlers hardly need to be encouraged to make sounds! But do it anyway, with What's that Sound? board books. Ok, sounds aren't the stuff kids are supposed to know by kindergarten, but these are lots of fun!"
— Hi-Rise Newspaper

Other titles by Sheryl McFarlane

Island in the Salish Sea Read-Along

Island in the Salish Sea

Waiting for the Whales Read-Along

Going to the Fair