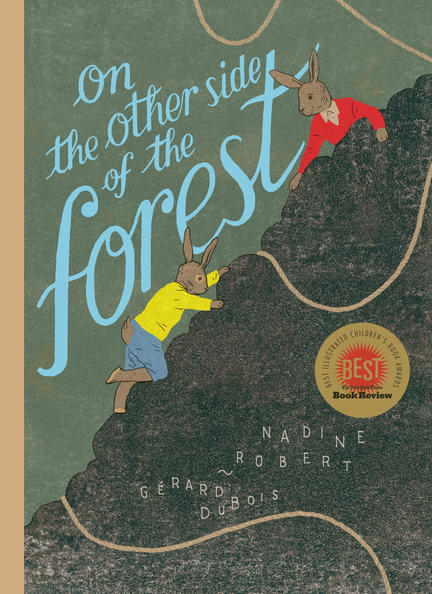 Named a Best Book of the Year by Kirkus

What’s on the other side of the forest? A young rabbit and his father are determined to find out in this modern picture book that “feels like a vintage gem” (New York Times), calling to mind the tender work of Beatrix Potter.

Some say that wolves, ogres, and giant badgers live in the forest beside Arthur’s house. That’s why no one ever goes in there, to see what’s on the other side. But one day, Arthur’s dad has an idea—a magnificent idea! Build a tower to look over the treetops! But a magnificent idea takes a lot of work. Will the villagers join and help them? And when the tower takes shape, what will they see on the other side?

This wonderful, heartwarming story reminiscent of classic children’s books, is perfect for:

NADINE ROBERT is a Canadian author and editor. She started her career designing video games before becoming a scriptwriter for animated films. She went on to set up the publishing houses Comme des géants and Le Lièvre de Mars. She holds degrees in education and literature and has translated several children’s books. She lives in Montreal with her family.

GÉRARD DUBOIS works for many well-known newspapers and magazines in North America and Europe. He has collaborated on more than fifteen books, including several children’s books. For his work, he has received many honors, including four gold medals from the Society of Illustrators and two nominations for the Governor General’s Awards of Canada.

“[On the Other Side of the Forest] feels like a vintage gem.”
—New York Times

“[The] family structure, the cooperative community, and the quality of the precisely inked and colored art combine for a riveting read.”
—Kirkus Reviews STARRED Review

“The charming text and dreamy artwork... convey the quality of an old-fashioned folktale, while the intricate details recall the extraordinary structures built by the characters in Arthur Geisert’s pig books.”
—Booklist

“A heartwarming tale of a rabbit father and son and their decision to venture into the scary forest behind their house.”
—Quill & Quire

“Are there really wolves and ogres and giant badgers in the forest? No one knows because no one ever goes into those dark and scary woods. You’ll have to read this fanciful picture book if you want to know … and pay special attention to Dubois’s illustrations because they’re an enormous part of the fun.”
—Globe and Mail

“A must-have picture book! This endearing tale offers the opportunity to discuss what it means to help others and never give up. Recommended.”
—School Library Connections

Other titles by Nadine Robert

Other titles by Gérard DuBois

Who Owns the Clouds?