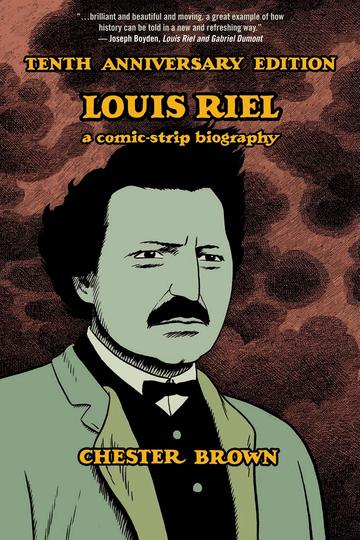 A limited-edition reprint of Brown's celebrated biography of the Canadian rebel
Louis Rieltells the story of the charismatic, and perhaps mad, nineteenth-century Metis leader whose struggle to win rights for his people led to violent rebellion on the nations western frontier. When the collected book appeared in 2003, Brown won widespread critical and industry acclaim forLouis Riel, including two Harvey Awards and inclusion on countless best-of lists. Beyond that, it single-handedly revitalized the biography genre of comics, paving the way for a new generation of artists.
This special tenth anniversary edition features rare supplementary material, including early cover art from the original serialization, pencil studies and draft scripts, poster and catalogue art, and a new essay by critic Sean Rogers.

Chester Brown is the cartoonist behind the acclaimed Yummy Fur comic book series, and the author of several graphic novels and memoirs, includingPaying for It,Louis Riel, andEd the Happy Clown. His work has been published around the world. He lives in Toronto, Canada, where he ran for Parliament in the general election as a member of the Libertarian Party of Canada.

A gripping story . . .Louis Rielis comix history in the making, and with it, history never looked so good.

[Louis Riel] has the thoroughness of a history book yet reads with the personalized vision of a novel.

Brown has invented a biographical form unique to his medium.