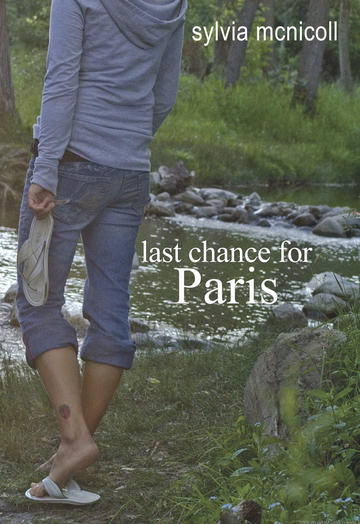 Zanna is a rebellious pre-teen city girl with a fondness for tattoos and bad boys. But after her last rebellion-a strawberry tattoo on her ankle-her mother leaves for France without her. Zanna is forced to spend the summer with her twin brother, Martin, and their glaciologist father in the mountainous region of Last Chance Pass. There Zanna takes in an injured and abandoned puppy, which she and her brother rescue from underneath their new home. With only a few days in the Rockies, she realizes that no cell phone and a slow internet connection are the least of her problems. Tyler, the charming, blue-eyed park ranger, is convinced that her new dog, who she conveniently names Paris, is a wolf. But when her brother goes missing, what had begun as a boring and rustic inconvenience turns into a matter of life and death. With the help of Tyler and Paris, Zanna sets out to rescue her brother, and in the process, discovers what really matters the most.Award-winning author Sylvia McNicoll uses her uncanny empathy for young teens to combine intense emotions and suspense with high action in Last Chance for Paris. Can Zanna resist the charm of the handsome park ranger? Will she be able to find the right place for Paris, who's already chosen her family as his own? Will they find Martin in time? Last Chance for Paris will have you gripping the pages until the very end.

Sylvia McNicoll has written over thirty-five novels for young audiences, including Body Swap and the Great Mistake Mystery series, inspired by her own errors and dog walks with her grandchildren. What the Dog Knows is a tribute to the many dogs she’s loved. She lives in Burlington, Ontario.