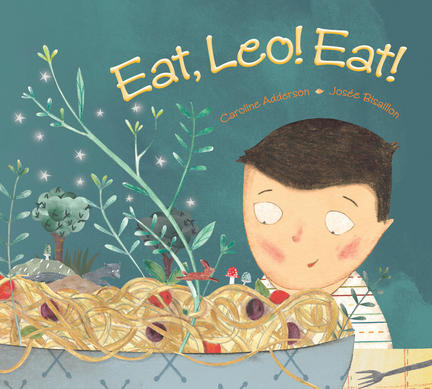 Leo wants no part of sitting down with his family to eat Nonna's big, delizioso lunch every Sunday. “I'm not hungry,” he insists. Not hungry? Hmm. Clever Nonna gets an idea. She'll use a story to lure Leo to her table. And since the pasta in her soup, called stelline (little stars), is woven into the story about a boy who journeys to his grandmother's at night, it works. But again on the following Sunday, Leo doesn't want to eat. So Nonna expands her story, this time adding some chiancaredde (paving stones), the name of the pasta she's serving that day, to create a path for her character to follow. Now Leo's hooked. So much that he begins to badger Nonna every Sunday to reveal more pasta-based details of the story. And week by week, as Leo's relatives crowd around listening to Nonna and teasing Leo to get him to mangia (eat), he slowly comes to realize just how happy he is to have a place at this table. In this heartwarming picture book, award-winning author Caroline Adderson beautifully captures the love and tenderness Leo feels from his grandmother and the rest of his close-knit family through lively, true-to-life dialogue. The playful, detailed artwork by Josée Bisaillon helps bring all of them to life. This book offers a perfect framework for lessons exploring the heritage, customs and relationships of families. The unique story-within-a-story concept, along with the idea that Nonna's tale is being told cumulatively, could easily launch a storytelling assignment. Additionally, the section on pasta and the list of Italian vocabulary words make a great introduction to foreign cultures through food and language.

... a story that is loaded with read-aloud temptations, creating a recipe that should be a winner in the classroom and during library story times.—Quill & Quire, starred review

The pictures by Josée Bisaillon ... are lush and rich, almost good enough to eat ... The depiction of a warm, noisy, and extended Italian family is respectful and celebratory.—Montreal Review of Books

The pages are filled with vivid illustrations adults and children ages five to eight will eat it up.—The Calgary Herald

An engaging read-aloud that will have you gathering your family for a home-cooked meal and some shared stories.—School Library Journal

This is a love letter about happy family lunches, wonderful flavorful Italian cooking and the magic of stories and storytelling.—Resource Links

Eat, Leo! Eat! showcases the ways storytelling can help us connect to the world around us, and bring us closer together as well. A lovely tale for families and friends to share.—CM Magazine

Other titles by Josée Bisaillon

I Want to Build a Seahouse

I Want to Build a Seahouse (pb)

The Moon is a Silver Pond, The Sun is a Peach

Martin and the River

Poem in My Pocket

Out into the Big Wide Lake

A Story of Seasonal Change

Coming of Age With This is Sadie

Sara O'Leary on Sadie as bildungsroman, the wisdom of five-year-olds, the genderization of play, and reading and empathy. Sara also suggests Sadie's …