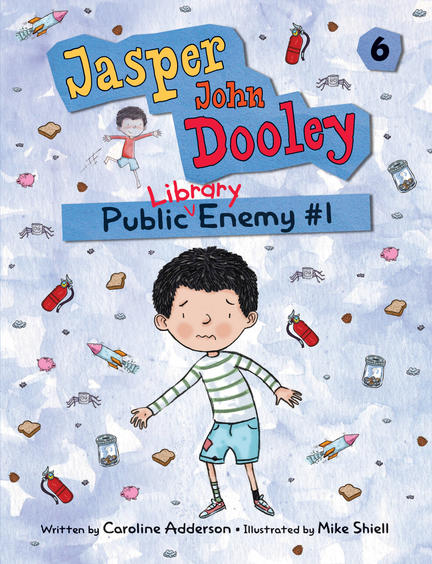 All Jasper John Dooley was trying to do was practice his reading skills. He wanted to be ready for his turn to sit in the big, comfy chair at the library on Wednesday and read to Molly the Dog. But, even though Jasper was being so so so careful, the wonderful library book about toilet-paper-tube crafts accidentally falls into his bathwater and drowns. After that, he and his dad only make things worse by setting the book on fire and then shooting it with the fire extinguisher. “We're Book Killers,” Jasper says gravely. He knows he's going to have to pay for the ruined book, or they'll never let him back in the library again. Except, from what Jasper can tell, the price printed on the book says two thousand five hundred dollars! How can Jasper possibly find a way to raise that much money? And before Wednesday? He'll need his best friend Ori's help now more than ever.

The illustrated chapter books in acclaimed author Caroline Adderson's Jasper John Dooley series are perfect for early readers. To Jasper, everything is an adventure, and his quirky and unique point of view is laugh-out-loud funny. Jasper's close relationship with his parents and his friendship with Ori offer young children wonderful role models for personal development. Here, Jasper clearly feels accountable for the library book entrusted to him, making this a great character education choice for discussing responsibility as well as how everyone makes mistakes. This book will be much sought after for independent reading, though it's also an excellent pick for read-aloud.

Like most kids, Mike liked to draw and once he started to get recognition for his drawings, he drew more and more. He also liked to make people laugh, so put those two things together and you have a cartoonist on your hands.Many of Mike's funny ideas come from observing the world around him and twisting everyday occurrences into funny and sometimes totally absurd cartoons, drawings and short animated films. Mike's cartoons and illustrations have appeared in many magazines, books and greeting cards in North America and Europe. His animated series, The Melon Shorts, has appeared in numerous film festivals around the world and has won a number of awards.Mike is the illustrator of the Gross Science series of books written by Edward Kay. The three titles in the series are Stinky Science, Germy Science and Poopy Science. Both Stinky Science and Germy Science are being adapted into an animated TV series. Mike is excited to be making his debut as an author-illustrator with the graphic novel Linty: A Pocketful of Adventure.Even on his most stressful and not-so-fun days, Mike reminds himself that he is making a living doing the thing that he had dreamed of doing when he was a little kid ... so he tries not to be too whiny. Instagram: @linty2022 Facebook: @linty2022 Twitter: @Wandering88

Other titles by Mike Shiell

Getting to the Bottom of What Comes Out Your Bottom

Linty: A Pocketful of Adventure

The Sick Truth about Getting Sick (and Staying Healthy)

Why the Smelliest Smells Smell So Smelly

Discover the Cool (and Creative) Side of Your Fridge

Financial literacy is part of the new math curriculum for grades 4-6. But why not start even sooner, as young as kindergarten?

Gorgeous picture books, middle -grade books to get kids hooked on reading, and hard-hitting YA titles.