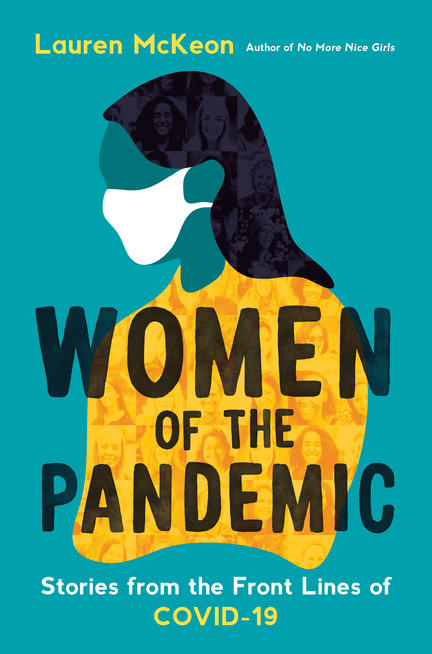 The story of the pandemic is the story of women. This riveting narrative offers an account of COVID-19, reminding us of women's leadership and resilience, reflecting back hope and humanity as we all figure out a new normal, together.

Throughout history, men have fought, lost, and led us through the world's defining crises. That all changed with COVID-19. In Canada, women's presence in the response to the pandemic has been notable. Women are our nurses, doctors, PSWs. Our cashiers, long-haulers, cooks. In Canada, women are leading the fast-paced search for a vaccine. They are leading our provinces and territories. At home, they are leading families through self-isolation, often bearing the responsibility for their physical and emotional health. They are figuring out what working from home looks like, and many of them are doing it while homeschooling their kids. Women crafted the blueprint for kindness during the pandemic, from sewing masks to kicking off international mutual-aid networks. And, perhaps not surprisingly, women have also suffered some of the biggest losses, bearing the brunt of our economic skydive.
Through intimate portraits of Canadian women in diverse situations and fields, Women of the Pandemic is a gripping narrative record of the early months of COVID-19, a clear-eyed look at women's struggles, which highlights their creativity, perseverance, and resilience as they charted a new path forward during impossible times.

Lauren McKeon was the editor of Canada's progressive, independent This Magazine from 2011 to 2016. While at This, Lauren helmed one of the bestselling issues in recent years, "Why Canada Need More Feminism," and also organized a sold-out event on the topic, which headlined a diverse, intersectional roster of speakers. Before leading "This," Lauren worked as a reporter, editor and writer in the North for several years, living in Yellowknife and travelling Canada's territories and northern Alberta.

Today, she is the digital editor at The Walrus and a contributing editor at Toronto Life, where she wrote about her experiences with sexual assault in 15 Years of Silence. In response, Lauren has heard from dozens of women around the world who've shared their own experiences — some for the first time — and was prominently featured in the documentary PTSD: Beyond Trauma, which aired in January 2017 on David Suzuki's The Nature of Things.

Lauren's personal essays, which tackle the world and her experiences through a not-so-rosy feminist lens, have twice been featured on Longreads.com, a popular site dedicated to "helping people find and share the best storytelling in the world." Her long-form writing has won her several Canadian National Magazine Awards, including four honorable mentions, one silver, and in 2015, a gold in the personal journalism category for her Toronto Life piece "Save me From My Workout."

Lauren writes for Hazlitt, Flare, Reader's Digest, and TVO.org.  One of her essays also appears in Best Canadian Essays 2017.

Excerpt: Women of the Pandemic: Stories from the Frontlines of COVID-19 (by (author) Lauren McKeon)

As stay-at-home orders were issued across North America in early March, it became clear that the story of the pandemic would be different for women—that, in many ways, the story of the pandemic was the story of women. In Canada, women comprise 81 per cent of healthcare workers. Notably, they make up the vast majority of nurses, social workers, and personal support workers (PSWs). Beyond the healthcare front line, the New York Times estimated that one in three jobs held by women had been designated as essential during nation-wide shutdowns, and that racialized women, specifically, held more essential jobs than anybody else. Throughout the pandemic, these women were tasked with keeping our bodies and minds healthy, with keeping us fed, with keeping our hospitals and public spaces clean, with helping the most vulnerable among us, and with being near our bedsides when we died. They led us through, even as they lost the most, and the harsh, uncomfortable truth is that sometimes they led us simply because they couldn’t afford to lose more.

To compound all of this, at the same time they were performing these essential jobs, many women abruptly became responsible for home-schooling their kids, juggling their children’s needs with their own, often without support. Single and low-income mothers scrambled to buy diapers, to figure out child care, to keep scraping by. Still more women lost their income, accounting for 62 per cent of the job losses between late February and March, and for 50 per cent more vanished work hours than men. Women between the ages of twenty-five and fifty-four, in particular, lost more than two times the jobs that men did. Economists began calling the chilling economic nosedive in North America the “she- cession,” noting that for the first time in history, women were more affected by mass job losses than men. And, as COVID-19 swept through long-term care (LTC) homes in Canada at twice the rate of other developed countries, we also became one of the only places in the world where more women than men were getting sick and dying. Many people’s worlds were getting smaller, scarier, more uncertain, but it was arguably women who felt this most keenly—women who balanced barefoot on the razor’s edge.

But it was also women who, amid the horror and disaster, gave us hope, leadership, and resilience. Across Canada, when we were at our most isolated, women brought us together. On Facebook, two Toronto women, Mita Hans and Valentina Harper, decided to reach out to their neighbours with a modest question: How can we help? The resulting mutual aid group— who, in a refusal to give in to doomsday fearmongers, cheekily named themselves “Caremongers”— quickly became a worldwide movement. Within a month, similar groups had formed across the United Kingdom, Malaysia, India, Pakistan, and the United States, all with the intent of ensuring their community’s most vulnerable were not, once again, forgotten. Women banded together to organize mask-making drives, stitching and distributing over 220,000 free coverings through the grassroots group Canada Sews. Elsewhere, women offered free emergency therapy services to frontline workers and organized funding drives to pay people’s bills when their Canada Emergency Response Benefit didn’t arrive fast enough. In Nova Scotia, Black women lobbied for COVID-19 testing sites in historically overlooked and underserviced neighbourhoods. In every city and town, women were determined to bring out the best in us, even when we were told to expect the worst. People gave millions of dollars, gave time, gave themselves.

“It was such a huge undertaking,” said Lee-Anne Moore-Thibert, who founded Canada Sews. “It was such a huge show of Canadian spirit.” When she started the group on March 22, she named it Durham Sews, thinking she’d just make a few masks with a few friends for Oshawa, Ontario, and, maybe, the surrounding region. Within twenty-four hours, she had received eight hundred requests and more than three hundred people had joined her sewing army. Watching the numbers climb, she remembers joking with her husband, like, “Ha-ha-ha, let’s see if we can hit fifty thousand masks.” It was the most far-fetched number she could think of—so distant and so big it didn’t even really seem like a goal. But within a few days, the group had grown large enough that she’d renamed it Ontario Sews. Within a week, it became Canada Sews. There were so many requests, and so many volunteers to coordinate, that Moore-Thibert, who is also a managing partner at a para-legal firm, an at-home caregiver for her mother-in-law, and had recently given birth to her first child, was working twenty-two hours every day. She’d wake up at 5 a.m. to nurse her daughter, answer requests, and coordinate volunteers. And, on April 30, when the organization hit that previously unimaginable number of fifty thousand mask deliveries, she broke down and cried. It felt like every hour was filled with fear about the future, but at least she could say that, when it seemed like the world was ending, she did one thing that helped people.

Beyond these everyday small acts of leadership, were the big, life-or-death ones. I have never seen so many women leaders— or their compassion, vulnerability, and humanity—so widely celebrated. In Vancouver’s Gastown, artists painted colourful, calm-faced murals of Dr. Theresa Tam and Dr. Bonnie Henry. Others emblazoned the likenesses of the country’s many women public health officers on T- shirts, coffee mugs, posters, and pins, usually donating proceeds to various foodbanks and charities. In Alberta, where Deena Hinshaw is the chief medical officer of health, in just six days, one woman sold over 750 shirts that read “What Would Dr. Hinshaw Do?,” giving all $20,023 in sales to the province’s foodbanks. B.C.’s Henry, easily the most popular of the bunch, even got her own fan club and a namesake pink-and-plum John Fluevog shoe. In June, the New York Times ran a profile of her under the headline “The Top Doctor Who Aced the Coronavirus Test.” Looking warily toward the failed leadership to the south during the first wave, observers praised the way Canada’s majority-women medical leadership navigated one of the worst crises in modern history. Henry’s practical advice mantra resonated and reverberated, becoming both a balm and a gospel: “Be kind, be calm, be safe.”

It’s impossible to guess at the full consequences of COVID-19. University of British Columbia sociology professor Sylvia Fuller said in July of the disproportionate impact of the virus on women, “By this point it’s become clear that the pandemic is not the ‘great equalizer.’” As much as we pine for, or rush toward, the new normal, the pandemic isn’t over. We cannot know how far the ripples will extend, or what else will be redrawn. Surely, we’ll see both good and bad changes, resurgent kindness and unaffordable setbacks. Already, we’ve seen calls for better social supports, health care, and higher pay for essential workers. Already we’ve seen a widening gender pay gap, an uneven return to work, and an increase in gender-based violence. As we attempt to chart our paths forward, it’s important for us to reflect on this exceptional year, to honour it, and to unflinchingly examine its darkest truths. So, yes, let us rebuild with hope and generosity, but first let us pause and pay attention to what this time, and these extraordinary women, have to teach us.

Canadian Accounts of the Pandemic

Learning About Vaccines, Pandemics, and COVID-19

No Longer a Footnote: Extraordinary Lives

History is too often told through the texture of men’s lives. In recent years, the rise of women’s biography and memoir has sought to rectify that, …