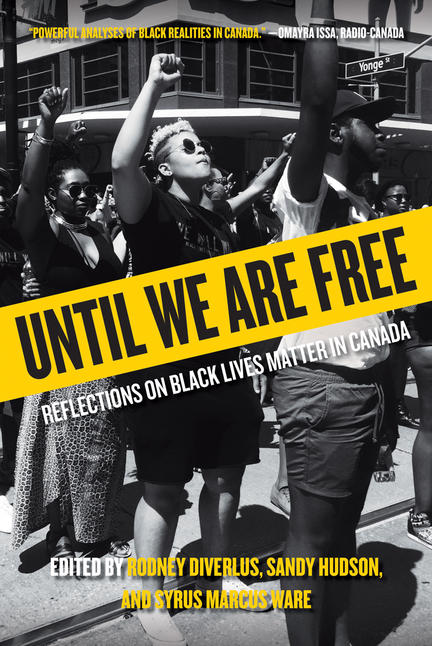 The killing of Trayvon Martin in 2012 by a white assailant inspired the Black Lives Matter movement, which quickly spread outside the borders of the United States. The movement’s message found fertile ground in Canada, where Black activists speak of generations of injustice and continue the work of the Black liberators who have come before them.

Until We Are Free contains some of the very best writing on the hottest issues facing the Black community in Canada. It describes the latest developments in Canadian Black activism, organizing efforts through the use of social media, Black-Indigenous alliances, and more.

"Until We Are Free busts myths of Canadian politeness and niceness, myths that prevent Canadians from properly fulfilling its dream of multiculturalism and from challenging systemic racism, including the everyday assaults on black and brown bodies. This book needs to be read and put into practice by everyone." —Vershawn Young, author of Your Average Nigga: Performing Race, Literacy, and Masculinity and co-author of Other People's English: Code Meshing, Code Switching, and African American Literacy

Sandy Hudson is the founder of the Black Lives Matter movement presence in Canada, a founding board member of the Black Legal Action Centre, and co-hosts the Canadian political podcast Sandy and Nora Talk Politics.

Syrus Marcus Ware is a Canadian artist, activist and scholar. He is currently a CLA Assistant Professor in the School of the Arts at McMaster University. He has worked since 2014 as faculty and as a designer for The Banff Centre. Ware is a founding member of Black Lives Matter Toronto. For 13 years, he was the coordinator of the Art Gallery of Ontario's youth program. During that time Ware oversaw the creation of the Free After Three program and the expansion of the youth program into a multi pronged offering. He has published four books and in 2020 co-edited (with Rodney Diverlus and Sandy Hudson) Until We Are Free: Reflections on Black Lives Matter in Canada, a collection of reflections on the Black Lives Matter movement in Canada.

Other titles by Syrus Marcus Ware

Love Is In The Hair