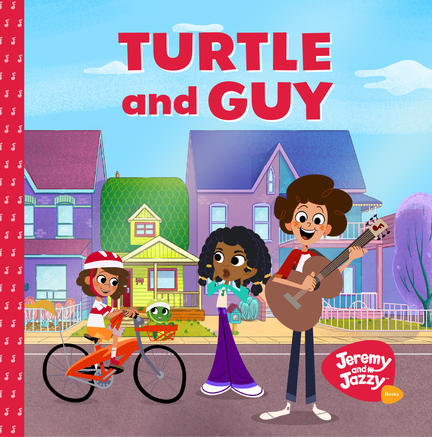 Jeremy, Jazzy, and Tunebug discover how confusion feels in one of the best preschool books about emotions, making mistakes, and so much more in&nbspTurtle and Guy.

Learn How "I am Confused" Feels

Jeremy, Jazzy, Tunebug, and Stu discover how confusion feels in one of the best preschool books about emotions, making mistakes, and so much more in Turtle and Guy.

Jeremy and Jazzy meet Mr. Turtle Guy - but wait! Mr. Turtle Guy isn't one guy, it's two! What is this feeling? I am confused! In this groundbreaking book about feelings and emotions, tackle what confusion feels like, why we want to blame others, and how to take responsibility for your mistakes while learning from them. A song book about confusion. Travel with Jeremy, Jazzy, and the gang as they go on dazzling adventures to discover how to identify and cope with emotions in healthy ways. The Turtle and Guy story-song makes learning a blast every time! It can be read by itself or as a sing-along with the Jeremy and Jazzy show.

In Turtle and Guy :

 Learn how feelings and emotions such as confusion feel  Discover that everybody makes mistakes and how to handle them when you do  Celebrate themes like community, mental health, self assurance, and music

If you enjoy preschool books about emotions such as The Choices I Make, My Body Sends a Signal, or One Bee Too Many, you'll love Turtle and Guy .

Jeremy Fisher is a 3-time JUNO-nominated pop-folk singer-songwriter based in Ottawa. He has released 6 studio albums and his music has been featured on radio, in film (The Big Year, Our Idiot Brother), commercials (Volkswagon, American Airlines), and as main title TV themes (Disney, Global). Over the last 20 years Jeremy has toured all over the world and shared the stage with artists such as Alanis Morissette, Blue Rodeo and Indigo Girls. He is a co-creator, songwriter and voice actor in the new CBC animated series Jeremy and Jazzy, a show about how feelings become songs, songs become stories, and music, friendship, and collaboration create joy.

Robert de Lint is the co-founder of Vérité Films and is an award-winning writer, show runner, director, producer, picture editor and TV show creator. He's been a key creative contributor in over 300 episodes of prime-time television. Robert is a Co-Creator and Writer on the children's animated series, Jeremy and Jazzy. He was a Producer on Corner Gas Animated and Corner Gas: The Movie and directed over twenty episodes of Corner Gas. He won a Canadian Comedy Award, a DGC Award and was nominated for a Gemini Award for his work on this series. Robert was Co-Creator and Co-Showrunner of the 52-episode youth dramatic series renegadepress.com and the 65-episode children's series Incredible Story Studio and won multiple awards for his contributions on both series. He was Executive Producer, Co-Creator and key Director of InSecurity, a 23-episode comedy series. He co-created and executive produced the one-hour drama pilot The Dealership. Robert also works as a Senior Picture Editor on a host of award-winning series, feature length films and documentaries in Toronto including the hit series Kim's Convenience and Overlord and the Underwoods. Robert got his start in the industry on the Degrassi franchise. He is a member of the Director's Guild of Canada and the Writer's Guild of Canada.