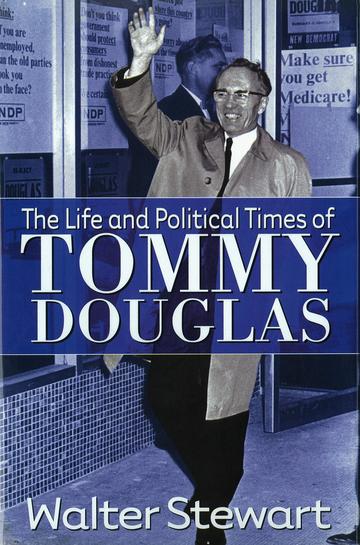 The Life and Political Times of Tommy Douglas

Vision and eloquence, two qualities valued in a political leader, were what Tommy Douglas was all about. Social policies we take for granted today -- Medicare, a Canada-wide pension plan, bargaining rights for civil servants, a Wheat Board to protect farmers -- were first advocated by Douglas. Medicare, his finest achievement, was first wrestled into place in Saskatchewan, and finally embraced by all of Canada.Tommy Douglas was a canny politician, but he never lost sight of his principles. He told his own party that, whenever it came up with a good idea like Medicare, political opponents were bound to take over. But that didn't matter to him. What mattered was that the ideas took root, to benefit every Canadian. Walter Stewart has written a passionate, clear-sighted biography of one of Canada's pre-eminent political trailblazers.

Walter Stewart was a Canadian writer, editor, and veteran journalist. Over the course of his career, Stewart worked for the Toronto Telegram, Star Weekly (published by the Toronto Star,) Maclean’s magazine, and the Toronto Sun, and was a regular guest on the CBC’s As It Happens. A prolific writer, Stewart penned more than twenty works, including Shrug: Trudeau in Power, Towers of Gold, Feet of Clay: The Canadian Banks, The Life and Political Times of Tommy Douglas, and the fictional Right Church, Wrong Pew and Hole in One, featuring reporter-turned-sleuth Carlton Withers. Stewart died of cancer in 2004.