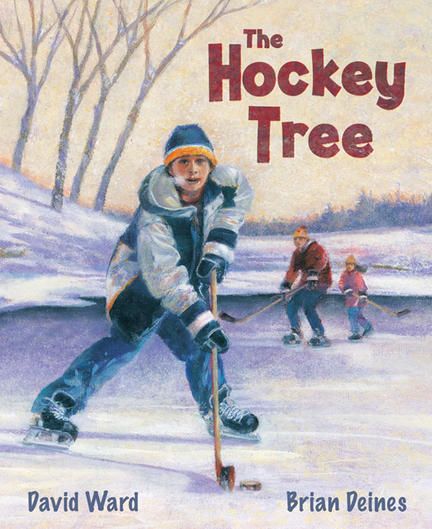 Some people will do anything to keep playing hockey! Owen and Holly are having a great day whacking the puck around on the frozen lake. . . until Holly smacks the puck past Owen and it falls down an ice-fishing hole. They figure the game is over, until their father remembers the way the old-timers did it. He cuts an inch-thick round from a fallen tree, then gets a fisherman to dip it in the freezing water so it becomes coated with ice. Now that there's a puck, the game can begin again! David Ward's heart warming story will appeal to hockey lovers young and old, and illustrator Brian Deines' timeless artwork brings to life the "love of the game."

DAVID WARD is the author of the best-selling picture books The Hockey Tree and One Hockey Night. Raised in Quebec and Vancouver, he currently lives in Portland, Oregon with his wife & children. Visit him online at www.davidward.ca.

BRIAN DEINES has illustrated numerous books for children, including SkySisters

and One Hockey Night (written by DavidWard). He has been nominated for

numerous awards, including the Governor Generalâ€™s Literary Award, the Ruth and

Award, and the Lillian Shepherd Memorial Award. A native of Red Deer, Alberta,

Owen and his family enjoy a day of hockey – until they lose their puck. But the game isn’t over yet… His dad has a plan. A warm winter tale brought to life with timeless artwork.

Other titles by David Ward

I Am Canada: Fire in the Sky

Other titles by Brian Deines

A Vietnamese Boy's Story of Survival

A Bear in War

A World of Kindness

A Journey to Peace

Resources
Resources
Ages
6 to 9
Grades
1 to 4

In a Cloud of Dust

Bear on the Homefront

On a Snowy Night