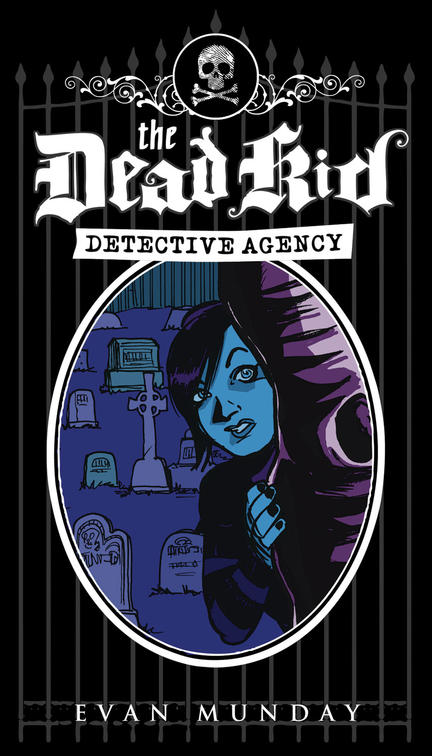 Thirteen-year-old October Schwartz is new in town, short on friends, and the child of a clinically depressed science teacher. Naturally, she spends most of her time in the Sticksville Cemetery, which just happens to border her backyard. And that backyard just happens to be the home of five dead teenagers, each from a different era of the past: there’s the dead United Empire Loyalist! The dead escaped slave who made her way north via the Underground Railroad! The dead quintuplet!

Soon, October befriends the five dead kids. Together — using October’s smarts and the dead kids’ abilities to walk through walls and get around undetected and stuff — they form The Dead Kid Detective Agency, committed to solving Sticksville’s most mysterious mysteries. October’s like Nancy Drew, if she’d hung out with corpses.

When Sticksville Central High School’s beloved French teacher dies in a suspicious car accident, it provides the agency with its first bona fide case. Soon October and her five dead friends find themselves in the midst of a nefarious murder plot, thick with car chases, cafeteria fights, sociopathic math teachers, real estate appointments, and a wacky adventure that might uncover the truth about a bomb that exploded almost 40 years ago.

Evan Munday is the illustrator of the novel Stripmalling, written by Jon Paul Fiorentino (ECW 2009), and is the cartoonist behind the self-published comic book, Quarter-Life Crisis, set in a post-apocalyptic Toronto. He works as a book publicist for Coach House Books. The Dead Kid Detective Agency is his first novel. He lives in Toronto, ON.

October Schwartz is not dead.

Now, there are plenty of dead folks in this book (you read the title before starting the book, right?), it’s just that October Schwartz does not happen to be one of them. That said, it was her first day at Sticksville Central High School, and she sort of wished she were dead.

October had moved to Sticksville only a month earlier, and she didn’t know anyone yet, unless you counted her dad and maybe the Korean lady who sold her gum at the convenience store. She’d spent the month of August reading in the cemetery behind their house and working on writing her own book. So her first day of high school was even more nerve-wracking than it was for most of the students at Sticksville Central. The way she figured it, everybody was going to hate her. They certainly had in her old town. Why should this one be any different?

There were plenty of reasons for the average high school student to hate her: she wasn’t chubby, but she wasn’t not chubby, which, to those naturally inclined to be unpleasant people, meant she was fat. Also, she wore more black eyeliner than most — barring only silent film actresses, really. Add to that the natural black hair she’d inherited from her mom and her affinity for black clothing, and she was like a walking teen vampire joke waiting to happen.

Plus, she was a little kid. Due to the advanced state of middle school in her former town, a futuristic utopia of almost 40,000 citizens — most of them employed by the town’s snowmobile factory — she’d been allowed to skip grade eight altogether in Sticksville (only three hours away geographically), straight into the teenage Thunderdome of high school before she even reached her teens. She was twelve and headed into grade nine, where most of her classmates were well on their way to fourteen if they weren’t there already. This part was to remain a secret from everyone, if she had her way. But even if her classmates didn’t know, October was sure they could smell the tween on her — the stench of Sour Keys and Saturday morning cartoons.

As October pulled on a black T-shirt, she began to imagine burgeoning extracurricular clubs founded on the members’ communal hatred of October Schwartz, its members wearing T-shirts emblazoned with hilarious anti-October slogans.

October’s dad — Mr. Schwartz to you — taught grade eleven and grade twelve biology, as well as auto repair at Sticksville Central, so it was sort of his first day, too. But somehow, October doubted her dad was anxious about what people would think of his clothes and hair.

She left for school early that morning, because she was cautious about that sort of thing. About other sorts of things, she wasn’t very cautious at all, as you’ll see. She shouted goodbye to her dad, who was still busy shaving in the washroom. He didn’t respond, but he was kind of concentrating, blaring music by Fleetwood Mac or some other band from the 1970s.

She walked into the backyard and out to Riverside Drive using the cemetery that bordered their backyard as a shortcut. Mr. Schwartz had been uncertain at first about purchasing a house so close to the town’s lowly cemetery. Not that he believed in ghosts, but there was something unseemly about it to him. However, the price was good and he wanted to find a home before the school year started, so he dismissed his uncertainties. October liked it. She smiled crookedly as she passed through the wide expanse of decaying stone and forgotten names on her way to the first day of the rest of her life.

The air was crisp and a bit cold for early September, like a Granny Smith apple left in the freezer by accident. October lived only about twenty minutes from Sticksville Central, so it wasn’t long before she pushed her way through the double doors of the school’s entrance. She opened her bag and unfolded her schedule.

Evidently, October wasn’t the only student concerned with arriving early. A veritable gaggle of other kids could already be seen congregating, conversing, and giggling inside the main corridor of the school.

One of these students — a tall one with auburn hair and a belt the width of a small diving board, who was standing with some friends beside the vending machines outside the cafeteria (spoiler alert: she’s a witch) — caught sight of October Schwartz and pursued her like a fashionable, but very silent homing missile. October, who was attempting to avoid contact with anyone and everyone, hurried past her. But she wasn’t quick enough to avoid the belt enthusiast’s loud slur:

Mortified, October made a sensible, strategic retreat to the girls’ washroom, which was thankfully empty. She gripped a porcelain sink and stared dolefully at herself in the mirror. Two minutes into high school and things were off to a horrible start. But, above all else, October was determined not to cry at high school. Ever. She was still twelve, but she wasn’t a baby.

She tried to fill her mind with thoughts different from her new “Zombie Tramp” status: her birthday, her dad, and her new classes. What did Zombie Tramp even mean? Why Tramp? Why not Zombie Floozy? Yet, because she was staring into a mirror, her mind kept drifting back to her big, stupid face.

Her dad often told her she was “darn cute,” because he was related to her, but October never believed him. Her dad was no prize himself; how would he know what cute was? October did a quick self-analysis in the mirror. She might have overdone it with the eyeliner today, and maybe she should have taken more effort with her hair. Around her neck, she wore a gift left behind by her mom, a silver ankh necklace. It was probably the eyeliner and all the black that was encouraging the Zombie Tramp comparison.

“An engaging tale with a resilient heroine, a dead but lively supporting cast and enough wit to grease the wheels.” — Kirkus Reviews

“[Evan Munday’s] text is full of pop culture references, some more obscure than others, but comes with a handy reference guide in the back. Not knowing the references won’t frustrate or deter readers from the story. A successful graphic artist, Munday also proves himself to be a worthy wordsmith on his first foray into children’s literature.” — Vikki Vansikle

“Munday’s unique brand of funny is completely worthy of teenagers, one of the most challenging audiences to coax into laughter. Munday is one to watch, as this first novel in a planned series proves in spades.” — Shannon Ozirny

“Munday handles this unbelievable plot deftly as you root for October and her friends.” — 410Media

“Hilarious, geeky pop culture fun and surprisingly touching, Dead Kid Detective Agency was an absolute joy to read. And any writer who says about Jackie Chan that readers should drop his book and watch Chan’s 'Hong Kong stuff' makes an immediate fan of me. I finished this book on a Sunday afternoon and already look forward to Book 2.” — Literary Treats

Thirteen-year-old October Schwartz spends most of her time in the cemetery, where she meets five dead teenagers. When October’s French teacher dies in a suspicious car accident, October enlists the aid of her friends to solve the mystery. They soon find themselves involved in a murder plot and on an adventure to uncover the truth about a 40-year-old explosion.

Loyalist to a Fault

Notes from a Children's Librarian: Mystery Novels for Young Readers

The Jewel of the Thames author on the moment she realized that 221b Baker Street was up for rent.