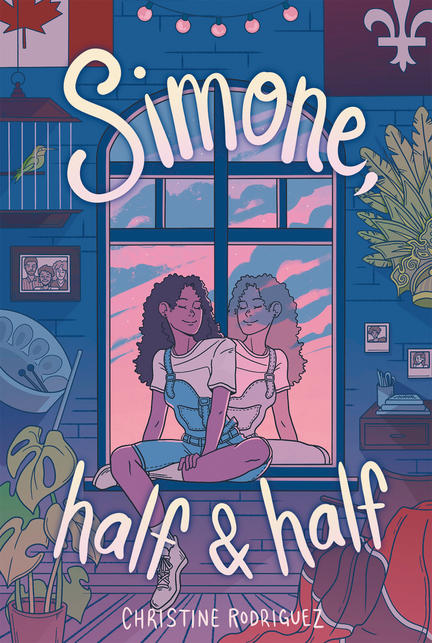 Fourteen-year-old Simone is caught between cultures: Canadian, Québécois, and Trinidadian. She’s also torn between friends and the projects they want her to take part in. Her best friend Sarah wants them to compete in the talent show with a dance routine, but her new friend Jay has introduced her to the Black History and Culture Committee’s activism and its organizer, tenth-grader Vanessa. Though Sarah represents the comfort of what she knew growing up, Jay and Vanessa offer Simone an opportunity to get to know part of herself that she hasn’t explored yet. As pressure mounts on seeing both projects through, her friendships start to feel the strain and her loyalties are tested. Can Simone find the courage to stand up for what she believes in? Will her friends accept the choices she makes? And will she finally learn to be more comfortable with herself? Simone, Half and Half is a touching story about finding one’s place between identities and communities.

Christine Rodriguez is the award-winning playwright of Dreaming in Autism, which earned third prize at Ottawa Little Theatre’s 72nd National One-Act Playwriting Competition. Simone, Half and Half, commissioned and produced in 2020 by Black Theatre Workshop, received five Montreal English Theatre Award nominations, including one for Outstanding New Text. Christine’s first short film, Fuego, an Official Selection of the 2021 American Black Film Festival, was written and filmed in English, French, and Spanish. She was nominated for Best Filmmaker of the Year by Montreal’s very own Gala Dynastie. Christine was also selected by the Rogers-Black Screen Office Development Fund to write the pilot for her TV concept Nina’s 80s. She holds an M.B.A. from McGill University and a Certificate of Professional Screenwriting from UCLA. She’s currently working on obtaining a major in Hispanic Studies from Université de Montréal. Christine’s work is largely informed by her mixed-race Afro-Caribbean heritage and her multicultural environment. She lives in Montréal.

Quincy Armorer has worked professionally as an actor, director, instructor, and administrator for over twenty years. As an actor, he has worked at the Stratford Festival, National Arts Centre, Centaur Theatre, Black Theatre Workshop, St. Lawrence Shakespeare Festival, Geordie Theatre, Repercussion Theatre, Imago Theatre, Piggery Theatre, and Shakespeare by the Sea, among many others. An alumnus of both the Theatre Department at Concordia University and the Birmingham Conservatory for Classical Theatre at the Stratford Festival, Quincy is Adjunct Professor at Queen’s University, Associate Director of the Acting Program (English Section) at the National Theatre School of Canada, and was Artistic Director of Black Theatre Workshop from 2011 to 2021.