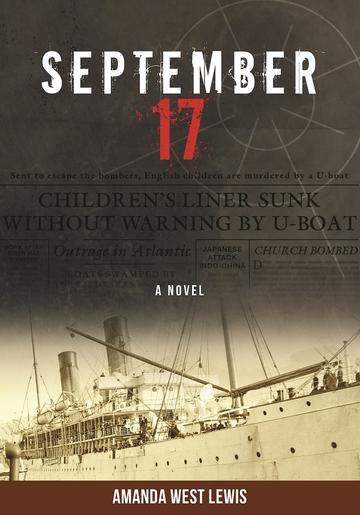 In July 1940, a British government-sponsored program called Children's Overseas Reception Board -- or CORB -- was set up to send children from Britain to Canada and other Commonwealth countries, in order to rescue them from the bombings of British cities.The City of Benares was a luxury liner that was recruited in September 1940 to transport 90 of these children to Canada, along with the ship's regular passenger complement. A convoy of ships including The City of Benares set off from Liverpool in mid-September. Approximately six hundred miles out, after the naval escorts had withdrawn, the ship was torpedoed by a German U-boat and sank in about half an hour. Only thirteen of the CORB children survived the sinking. As a result of this tragedy, the program was cancelled.September 17 is a novel that tells the story of three of the children that were on board The City of Benares, as they experience and survive the disaster and wait to be rescued. One lifeboat was not picked up by the destroyer sent to make the rescue, and was at sea with 46 children and adults for eight days until it was picked up near the Irish coast. Two teenaged girls held onto an overturned lifeboat for 18 hours before they were picked up, while another family, including two children not on the CORB program, floated on a tiny raft for hours before being rescued.The characters whose adventures are described are all real, though author Amanda Lewis has fictionalized some conversations and encounters.

AMANDA WEST LEWIS is the author of seven books for young readers, including September 17, which was nominated for the Silver Birch Award, the Red Cedar Award and the Violet Downey IODE Award. She is a writer, theater director, calligrapher and drama teacher. She is the founder of the Ottawa Children’s Theatre, and she has an MFA from Vermont College of Fine Arts. Born in New York City, she now lives in Brooke Valley, Ontario, with her husband, writer Tim Wynne-Jones.