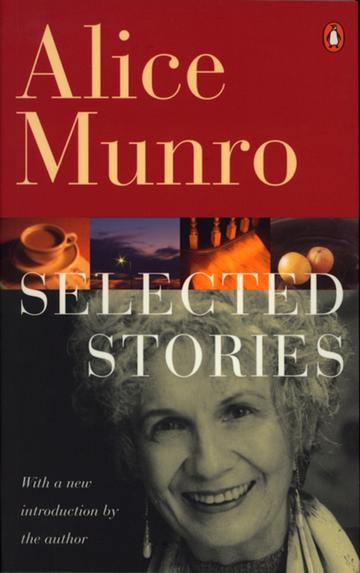 "All of her characters, even the minor ones, are given histories. And in the end we are witness to eruptions of emotional earthquakes, large and small."
-Newsday

"Alice Munro is a great story writer...These stories are loosely woven and brilliantly wrought...she is unique, there is no one quite like her."
- A.S. Byatt, The Globe and Mail

"A gallery of masterpieces...the arc of a life becomes a dazzling shuffle of a deck of photographs arranged as a story...Selected Stories goes on the bookshelf with other masterworks of modern literature, with Chekov, Faulkner, Woolf. Munro, like these writers, tills her ordinary soil and digs into universal themes."
-The Financial Post

Alice Munro grew up in Wingham, Ontario, and attended the University of Western Ontario. She has published sixteen books — Dance of the Happy Shades; Lives of Girls and Women, Something I’ve Been Meaning to Tell You; Who Do You Think You Are?; The Moons of Jupiter; The Progress of Love; Friend of My Youth; Open Secrets; Selected Stories; The Love of a Good Woman; Hateship, Friendship, Courtship, Loveship, Marriage; Runaway; The View from Castle Rock; Alice Munro’s Best, Too Much Happiness, and Dear Life. During her distinguished career she has been the recipient of many awards and prizes, including the recent Nobel Prize in Literature which cited her as “a master of the contemporary short story.”

Here at home she has won too many awards to list, including three Governor General’s Literary Awards, two Giller Prizes, several Trillium Prizes and a number of Libris Awards. Elsewhere she has won the Rea Award for the Short Story, the Lannan Literary Award, England’s W. H. Smith Book Award, Italy’s Pescara prize, the United States’ National Book Critics Circle Award, and the Edward MacDowell Medal in literature. Her stories have appeared in The New Yorker, The Atlantic Monthly, Saturday Night, The Paris Review, and other publications, and her collections have been translated into thirteen languages.