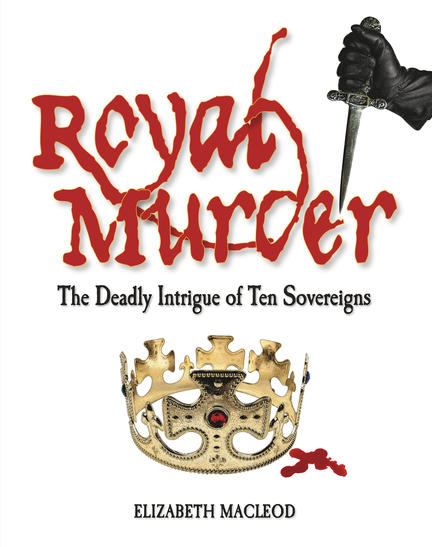 What would you do for absolute power?

For many monarchs throughout history, it was a question that ruled their lives. Step into the world of palatial intrigue, where holding the throne means evading death . . . or causing it.

Some sovereigns were cunning at avoiding their killers. Cleopatra of Egypt once rolled herself into a rug and was carried out past her enemies’ noses. Other royals were brutal when dealing with foes. Vlad the Impaler’s monstrous methods inspired the legend of Dracula the vampire.

A final section offers examples from the 20th century, from assassination attempts in England to a royal massacre in Nepal.

Blending dramatic storytelling and historical fact, and complete with fascinating photographs and artwork, Royal Murder is a compelling account of scheming sovereigns.

Liz is one nosy author, which is why she loves writing non-fiction. She’s very curious about why people do what they do, and likes sharing with kids the amazing facts and secrets that she uncovers.As a kid in Thornhill, Ontario, the idea of being a writer never crossed Liz’s mind—she figured most authors were already dead and they definitely weren’t Canadian. Besides, it was science that interested Liz.But writing was already part of Liz’s life. After dinner on school nights, Liz and her two brothers would trudge up to their rooms, close their doors and start to do their homework—or so their parents thought. A few minutes later, a piece of paper would come sliding under Liz’s door. One of her brothers had drawn a picture, usually of some weird creature.Liz really couldn’t draw (still can’t!), so the only way she could respond was to write a short story, often about a mad scientist or space alien. She would slip the story under her brother’s door and—well, not a lot of homework got done.At university, Liz studied sciences—there was hardly any writing involved at all. But after university, she was hired as an editor at OWL magazine, where she could combine writing and her love of science. But it wasn’t long before Liz had a goal: to write a book. Her first one was about lions and since then she’s written more than fifty others.Royal Murder: The Deadly Intrigue of Ten Sovereigns (2008) is one of her favourite books because royalty has always fascinated Liz. She loved going behind the scenes with monarchs from Cleopatra to Dracula to find out just what they would do to hold onto power or protect their families.Bones Never Lie: How Forensics Helps Solve History’s Mysteries (2013) was the winner of numerous awards, including the Crime Writers of Canada 2014 Arthur Ellis Award in the Juvenile/YA category. Liz’s latest book with Annick Press, Galloping Through History: Incredible True Horse Stories (Spring 2015), combines, once again, her outstanding storytelling skills with her passion for history. This time her love of animals also shines through as she recounts the stories of six horses that changed the way humans live, travel, fight, work, and play.Liz lives in Toronto with her husband, Paul, and their cat Cosimo. While she writes, he is usually sprawled across her desk—often right on the book she needs for research!

“Audiences in grades five and up will love hearing these gory, intriguing tales.”

“Without question, you learn a lot about history, and it’s the sort of book that young boys and girls as well are going to find fascinating.”

“A stunning blend of historical fact and storytelling . . . will leave readers thirsting for more.”

“Thrills and chills galore . . . will give readers lots of history along with a good, gory read.”

“Students fascinated by tales of kings and queens and all things royal will thoroughly enjoy this book.”

If royalty, history or true crime is your thing, you will find thrills and chills galore in this new book by prolific biographer Elizabeth MacLeod. The author, who has chronicled the lives of many good and famous people, now explores the dark and bloody history of some not-sonice historical figures.

She begins chronologically with Cleopatra, that icon of beauty and power. Cleopatra was born into the Egyptian royal family, one with a long history of familial murder. Blessed with beauty, brains and a great sense of style, Cleopatra rose to great heights of power and was responsible for the deaths of several of her siblings. After passionate marriages to Julius Caesar and Mark Antony, she avoided assassination only by taking her own life with the bite of a deadly asp.

Vlad Dracul, more commonly known as Vlad the Impaler, and glorified in legend as Count Dracula, came from another dysfunctional family in what is now Romania. As a child, he was used as a pawn in the constant wars that were being fought in the kingdom. He grew to be a nasty and violent ruler whose preferred method for execution was to impale his victims on great poles. He would often enjoy a meal while viewing the carnage. Who killed Vlad is not certain, but his head was displayed on a stake to show that he was well and truly dead.

Other famous and infamous rulers include Richard III (it is generally accepted that he did not kill the princes in the tower), Elizabeth I (who had her cousin Mary, Queen of Scots, executed), Marie Antoinette (a victim of time and circumstances) and the Romanov family of Russia. The author also includes a few more modern murders, including Alexander of Yugoslavia, Boris of Bulgaria, King Faisal of Saudia Arabia, Prince Dipendra of Nepal (who murdered his whole family over their disapproval of his fiancée) and Lord Mountbatten, cousin to Queen Elizabeth II.

The author successfully mixes history with great storytelling. She simplifies the complicated political and personal intrigue that surrounded all of the great rulers while giving the reader a good feel for the individuals themselves. This book is not for the faint of heart – the chapter on Vlad has some particularly gruesome bits. There are photos, paintings and drawings, and the book is nicely designed with interesting sidebars done up in gothiclooking type. Royal Murder will give readers lots of history along with a good, gory read.

Between these covers, readers meet some of history’s most infamous murdered and murdering sovereigns. Full of intrigue, gruesome deeds, and mysteries that remain unanswered to this day, this book is a bloody good read. Photos, illustrations, timeline, further reading and index included.

Other titles by Elizabeth MacLeod

Get Out and Vote!

How You Can Shape the Future

How to Become an Accidental Entrepreneur