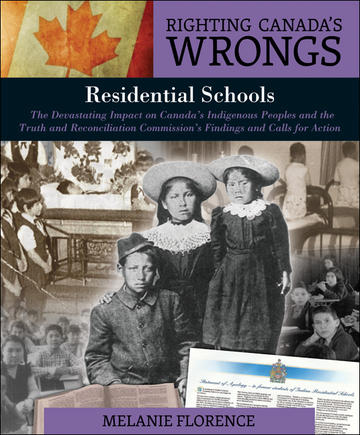 Canada's residential school system for aboriginal young people is now recognized as a grievous historic wrong committed against First Nations, Metis, and Inuit peoples. This book documents this subject in a format that will give all young people access to this painful part of Canadian history.

In 1857, the Gradual Civilization Act was passed by the Legislature of the Province of Canada with the aim of assimilating First Nations people. In 1879, Prime Minister Sir John A. Macdonald commissioned the "Report on Industrial Schools for Indians and Half-Breeds." This report led to native residential schools across Canada. First Nations and Inuit children aged seven to fifteen years old were taken from their families, sometimes by force, and sent to residential schools where they were made to abandon their culture. They were dressed in uniforms, their hair was cut, they were forbidden to speak their native language, and they were often subjected to physical and psychological abuse. The schools were run by the churches and funded by the federal government.

About 150,000 aboriginal children went to 130 residential schools across Canada.

The last federally funded residential school closed in 1996 in Saskatchewan. The horrors that many children endured at residential schools did not go away. It took decades for people to speak out, but with the support of the Assembly of First Nations and Inuit organizations, former residential school students took the federal government and the churches to court. Their cases led to the Indian Residential Schools Settlement Agreement, the largest class-action settlement in Canadian history. In 2008, Prime Minister Harper formally apologized to former native residential school students for the atrocities they suffered and the role the government played in setting up the school system. The agreement included the Truth and Reconciliation Commission, which has since worked to document this experience and toward reconciliation.

Through historical photographs, documents, and first-person narratives from First Nations, Inuit, and Metis people who survived residential schools, this book offers an account of the injustice of this period in Canadian history. It documents how this official racism was confronted and finally acknowledged.

Melanie Florence is a writer of Cree and Scottish heritage based in Toronto. She was close to her grandfather as a child, a relationship that sparked her interest in writing about Indigenous themes and characters. She is the author of Missing Nimâmâ (Clockwise Press), which won the 2016 TD Canadian Children's Literature Award, Stolen Words (Second Story Press), which won the 2018 Ruth and Sylvia Schwartz Children's Book Award and the bestselling He Who Dreams in the Orca Limelights line.

MELANIE FLORENCE is full-time writer based in Toronto. She is the author of the SideStreets novel One Night and the Recordbooks title Jordin Tootoo: The Highs and Lows in the Journey of the First Inuk to Play in the NHL, which was chosen as an Honor Book by The American Indian Library Association. As a freelance journalist, Melanie's byline has appeared in magazines including Dance International, Writer, Parents Canada, and Urban Male Magazine. Melanie is of Plains Cree and Scottish descent.

"As one of the Truth and Reconciliation Commission's calls to action states, 'Make age-appropriate curriculum on residential schools, Treaties, and Aboriginal peoples' historical and contemporary contributions to Canada a mandetory education requirement for kindergarten to Grade Twelve students.' (p. 7) this book certainly contributes to this action and should be added to every junior and senior high school and public library in Canada. Highly Recommended." Rated E - Excellent, enduring, everyone should see it!

"This resource-rich book is sure to spark both class and individual exploration. An index, glossary, and timeline will help teens navigate the rich content in this book, while links to online video and audio clips and the 'For Further Reading' section will guide them beyond its pages. Teachers will also find lesson plans and other helpful tools in an accompanying series Resource Guide."

"If I were purchasing materials for a high school library, I would buy at least 2 copies, and I would urge Social Studies and Aboriginal Studies classroom teachers to have at least one copy on their bookselves. Perhaps the strongest work to date in the Righting Canada's Wrongs series, Residential Schools underscores the importance of the Truth and Reconciliation Commission's work... Highly Recommended."