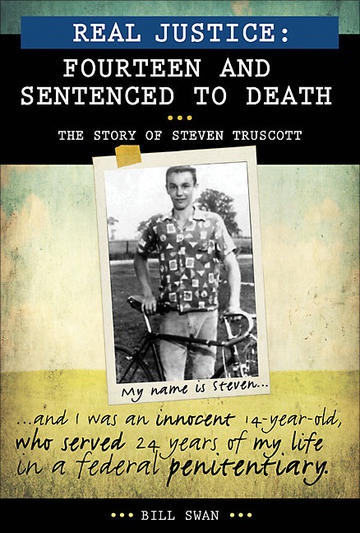 The story of Steven Truscott

At fourteen, Steve Truscott was a typical teenager in rural Ontario in the fifties, mainly concerned about going fishing, playing football, and racing bikes with his friends. One summer evening, his twelve-year-old classmate, Lynne Harper, asked for a lift to the nearby highway on his bicycle and Steve agreed. Unfortunately, that made Steve the last person known to see Lynne alive.

His world collapsed around him when he was arrested and then convicted of killing Lynne Harper. The penalty at the time was death by hanging. Although the sentence was changed to life in prison, Steve suffered for years behind bars for a murder he didn't commit. When his case gained national attention, the Supreme Court of Canada reviewed the evidence -- and confirmed his conviction.

It took over forty years and a determination to prove his innocence for him to finally clear his name. He has since received an apology and compensation for his ordeal.

In this book, young readers will discover how an innocent boy was presumed guilty by the justice system, and how in the end, that same justice system, prodded by Truscott and his lawyers, was able to acknowledge the terrible wrong done to him.

BILL SWAN has worked as a journalism teacher, editor, and newspaper columnist. His first three novels, Fast Finish, Mud Run, and Off Track are highly recommended by CM Magazine: Canadian Review of Materials. Mud Run was nominated for a Manitoba Young Readers' Choice Award. He is also the author of Corner Kick. He lives in Courtice, Ontario with his wife and daughter.