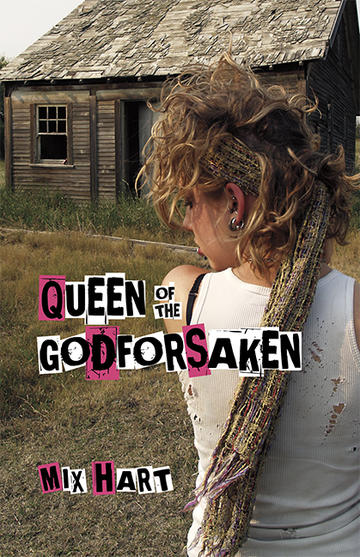 Queen of the Godforsaken

Lydia Buckingham is an ice queen. She wasn’t always that way, but after her parents uprooted the family to move to an isolated and rundown farmhouse in the middle of nowhere, she has been forced to adapt this personality in order to survive in rural Saskatchewan. Despite her interest in the local history at Batoche, Lydia finds herself unable to relate to her peers at school or to her surroundings. To top it all off her parents are constantly fighting, drinking, and abandoning Lydia and her younger sister Victoria for days on end. Soon the sisters have had enough, and they decide to set out alone into the brutal Saskatchewan winter.

About the Author
Mix Hart writes novels, the Peter-Not Pizzaface junior fiction series, picture books, and freelance articles, and is a blogger at Musings . . . by Mix Hart. Hart has lived all across Canada from the Pacific to the Atlantic coasts including the Yukon as well as in the United Kingdom. She currently resides in Kelowna, British Columbia, where she and her husband are parents to three daughters and two dogs. Queen of the Godforsaken is her first young adult novel.
Author profile page >
Excerpt

It is nearly dusk when we finally make it back to our own pasture. I am sweaty, dehydrated, and can barely focus on keeping the truck on the wagon trail. I keep that last bit to myself. For the first time ever, I am happy to see the house.

He runs through the corral, toward the truck. His legs move fast but his face moves slow. I wish it were Victoria and not me behind the wheel. His hand reaches for the driver’s side door before I even brake.

“Where in the hell have you been with my truck? I’ve been waiting all day for you two,” he says, wearing clean jeans and an ironed, crisp, blue checked shirt.

“We parked the truck and walked to Batoche,” I say. I want to tell him about Dumont but he is in no mood.

“No more driving privileges. The truck is officially off limits.” He reaches his hand through the window, opening my door from the inside. A whiff of freshly applied, spicy deodorant stings my nostrils.

“Until I say so, that’s when. Everyone out of the truck. I’ve got to make it to the university before everyone leaves. The university is screwing me around. I can’t feed you two on one course. Out, now! That means all of you.”  His eyes are wide with adrenalin. His glasses look comical on top of them. Marx won’t budge. The red on Dad’s neck crawls up the sides of his face, resembling mutton-chop side burns. “Marx, get the hell out of the truck. Move—bad dog!” A whimper escapes Marx’s floppy lips. Dad sighs a heavy, about to vomit his soul, sigh. He jumps in the truck. “Open the gate Lydia!” he says, through the open window. Victoria and I lift the corral gate. He speeds past with Marx at his side.

“Why is he taking Marx with him to the university?” Victoria says. Her fists clutch the back of my sleeve, as though, somehow, I’ll protect her from the craziness that is our father.

“No clue. Maybe he’s finally snapped, lost his mind.” The truck brakes abruptly at the end of the driveway. Dad jumps out and starts to yell. I can’t make out the words. He gets back in the cab but leaves the passenger side door open. Marx’s butt emerges from the truck. He’s being forcibly pushed out, arse first. Marx tries to jump back in but the truck door slams shut and it drives off, spitting gravel and leaving Marx behind in a cloud of dust.

Mom sits at the kitchen at the table, a flypaper, plastered with dead flies, swings low over her head, threatening to attach itself to her hair. She’s been crying. Her eyes turn turquoise when she cries.

“What’s wrong?” I say. Mom closes her eyes and shakes her head. “Tell me Mom, please.”

“Nothing. Nothing is wrong. Just leave me alone, okay?”

Victoria opens the fridge, looks inside momentarily and then slams the door. “What can I drink? I’m dying here!”

“Close the fridge—have a glass of water,” Mom says.

“Are you crazy? The water tastes like shit,” Victoria says. She rolls her eyes dramatically as she passes Mom. Her braids are nearly completely unravelled on top, like two budding devil horns.

“Get a grip,” Victoria says, stomping up stairs.

“Victoria can be a real bitch sometimes,” I say, bending over Mom from behind and wrapping my arms around her shoulders. Her hair smells stale, a little greasy, and kinda like dandruff. It smelled good in Vancouver, like peppermint from the mousse she used. “Mom, when was the last time you washed your hair?” I say. She forcibly breaks free of my embrace. She bolts down the basement stairs and slams her bedroom door. I wait, standing behind her empty chair until I no longer hear her muffled sobs.

Shit is right. There is nothing in the fridge but milk and Dad’s light beer. I hate milk. I grab a beer and climb the oak staircase to my room, pausing to look out the landing window at the giant orange beach ball rising above the poplars. The dingy staircase wall is painted warm amber in its light. It’s too beautiful. A sharp pinch of sadness twists beneath my ribs. I know what it is, the harvest moon. Prairie summers don’t last forever.

Mix Hart writes novels, the Peter-Not Pizzaface junior fiction series, picture books, and freelance articles, and is a blogger at Musings . . . by Mix Hart. Hart has lived all across Canada from the Pacific to the Atlantic coasts including the Yukon as well as in the United Kingdom. She currently resides in Kelowna, British Columbia, where she and her husband are parents to three daughters and two dogs. Queen of the Godforsaken is her first young adult novel.