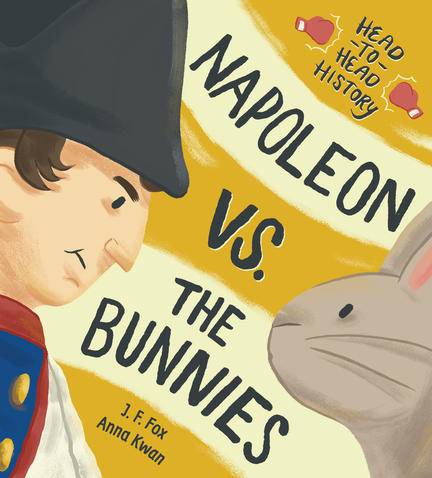 The renowned Napoleon Bonaparte faces an army of a different sort in this witty, unconventional telling of a true event in his life.

Everyone knows the Battle of Waterloo was Napoleon Bonaparte's most crushing defeat, right? Well, some beg to differ. It seems there was another less famous (though perhaps more humiliating) surrender in his past. Let's call it Bunnyloo. In 1807, Napoleon had ordered his chief of staff to round up rabbits for a celebratory hunt, only, he collected domesticated rabbits, not wild ones. So, when the rabbits were released to begin the hunt, they didn't run away. Instead, they ran straight at Napoleon and his hunting party. Now, some might think Napoleon --- king overthrower, army commander, territory conqueror --- would only laugh at an advancing battalion of cute, fluffy bunnies. Think again!

J. F. Fox's funny, quirky picture book story is based on a little-known event in the life of one of history's most notable figures and greatest generals. With an afterword containing further information about him and what's known about the ill-fated rabbit hunt, it makes a highly entertaining introduction to Napoleon. It also could spark lively discussions about notions of power, strength and courage, promoting inquiry-based learning. Adorable bunnies loom large in Anna Kwan's fun brightly colored illustrations that lean heavily toward shades of blue, white and red. Adding to the read-aloud appeal, dialogue bubbles in the illustrations contain easily decipherable French words, along with English text as spoken with a French accent.

J. F. Fox is a former editor at Lee & Low Books and has ghostwritten over seventy books for children, but she has switched gears to focus on her own projects. She is also the author of one other picture book, Friday Night Wrestlefest, published in 2020 by Roaring Brook Press. She lives in Brooklyn, New York, with her husband and two sons.

ANNA KWAN is an illustrator from Toronto, Ontario. She studied illustration at OCAD University where she drew comics and funny pictures, but didn't imagine it would lead her to illustrate children's books. She enjoys eating snacks, and is always happy to pet-sit when asked.

Historical drama with a comical twist.

The Globe and Mail

Other titles by J.F. Fox

Van Buren Sisters vs. the Pants Police, The

Other titles by Anna Kwan

Van Buren Sisters vs. the Pants Police, The