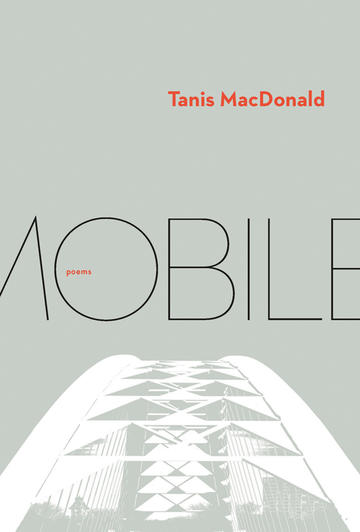 Longlisted for the 2020 Toronto Book Awards

Mobile is an uncivil feminist reboot of Dennis Lee's Civil Elegies and Other Poems; an urban lament about female citizenship and settler culpability; an homage to working and walking women in a love/hate relationship with Toronto, its rivers and creeks, its sidewalks and parks, its history, misogyny and violence. How do we, in Lee's words, see the "lives we had not lived" that "invisibly stain" the city? What are the sexual politics of occupying space in a city, in a workspace, in history? How can we name our vulnerabilities and our disasters and still find strength?

Written in a slippery mix of lyric and experimental styles, Mobile is MacDonald's grouchiest book yet.

"These poems performatively perturb our complacencies: toward city, land, plant, women, and men. With her sybil voice full of sass but never lacking civility, MacDonald forages the city for women's lives and names, knocking not on heaven's door but on the tombs where our world is heading. Confronting barriers of attitude and structure that women face daily, full of sounds and verve, Mobile is a deft counterpoint to Dennis Lee's long-ago Civil Elegies. Pick up this Mobile, readers; it's ringing and it's no robocall!" —Erín Moure

"With delightfully subversive wordplay and intertextual sleight of hand, Tanis MacDonald wanders the text of the modern city, exploring its civil energies with intelligence, incision, compassion, music, ferocity and wit. A Sibyl's elegies for the civil legacies of the past, these feisty poems interrogate the mansplaining streets, finding the always-there voices and experiences of women in its architecture and shadows, curbs and enthusiasms, structures and strictures, its texts and traditions, violence and vibrance, twists and dï??tournes. Go with MacDonald as she guides you through the streets of Mobile. It's a tour de force." —Gary Barwin