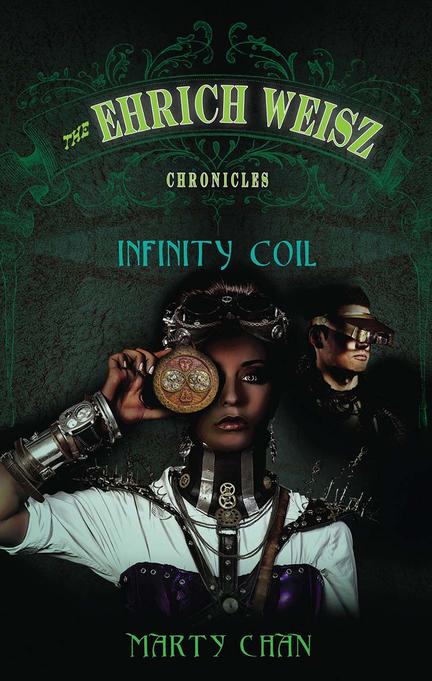 Ehrich Weisz, Demon Hunter was introduced to steampunk fans in Demon Gate. Now, he is continuing his increasingly desperate quest to rescue his brother in an alternate universe in the sequel, Infinity Coil.

Now a fugitive from Demon Watch, young Ehrich Weisz hides in the underbelly of an alternate New York where immigrants from other dimensions mingle among Americans. Amid growing racial tensions, Ehrich searches for Kifo, the man who stole his brother's mind and locked it inside an ancient medallion. He poses as a stage magician to draw out Kifo's next target—the commissioner of Demon Watch. In the wings, an army awaits Kifo to accomplish his mission so inter-dimensional soldiers can invade New York. Ehrich is willing to risk the outbreak of war to save his brother, but he must decide whether or not he can betray his friends.

"This is definitely one of the most infectious series out there. [...] This is young adult fiction at its best with so much happening and not an ounce of filler anywhere in the book. [...] Lots of pulse pounding action makes you never want to put this book down."
— Shelf Life

"Readers who like plot twists and turns that come in rapid fire procession will find much to enjoy in this thrilling series."
— The National Reading Campaign

"Infinity Coil is well written adventure tale that describes a very unusual version of our world, one complete with multiple villains and heroes, not all of whom are human. For readers who enjoy complex plots, steampunk settings, and plenty of action.
Recommended. "
— CM Magazine