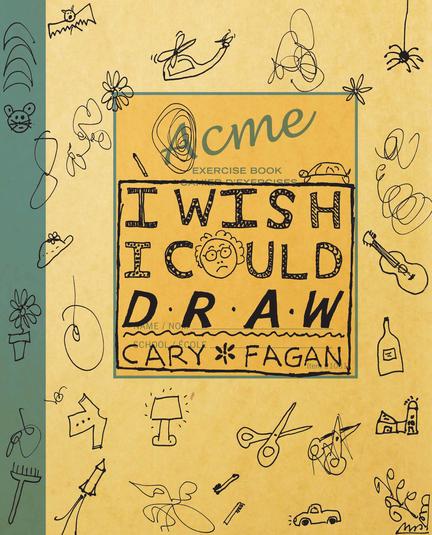 When the narrator of this sneakily clever book decides he will try to draw even though he believes he isn’t very good at it, a world of silly possibilities opens for him. By the end of the story, he has vanquished a dragon, been given a medal, published a book, and seen his artwork on display in a real museum—and all because he refused to be held back by his own perceived limitations.

The narrator of I Wish I Could Draw shares a name with creator Cary Fagan and has the same curly hair and glasses. Perhaps most interesting of all, though, the narrator believes he has no artistic talent—just like the Cary Fagan who not only wrote but also bravely and exuberantly illustrated this book. Fortunately for readers, both Cary-the-narrator and Cary-the-children’s-book-creator refused to let self-doubt stop them from trying to tell (and draw) the funniest and most exciting story they could think of. The result is a book that delivers plenty of excitement, silly jokes and fun—and also an important message about self-confidence and perseverance.

Designed to look like a child’s notebook, I Wish I Could Draw will inspire readers to pick up a pencil and let their imaginations do the rest.

A terrific picture book for the younger set. Recommended.

The upbeat ending will inspire wanna-be artists and storytellers to reconsider their own skills.

This friendly volume, told in the first person and directly addressing readers, is sure to encourage the perfectionist artist and wannabe cartoonist alike. Draw on!

By book’s end, readers will recognize that, amid all the self-abasement, Fagan is encouraging them to scribble, doodle, and draw away, without worrying whether their art is "good" enough.

Told from the first person perspective, the protagonist’s funny and direct manner lends the book a lighthearted and intimate conversational tone.

Notes from a Children's Librarian: Drawing the Line