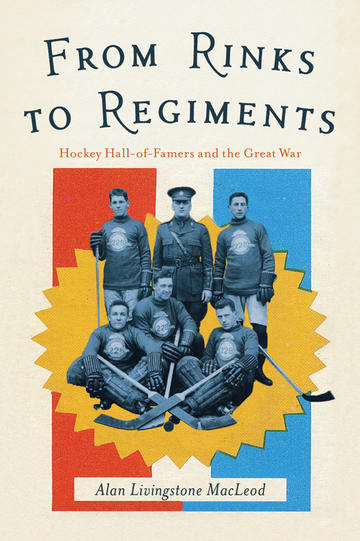 From Rinks to Regiments

Hockey Hall-of-Famers and the Great War

A celebration of thirty-two heroes of the First World War enshrined in the Hockey Hall of Fame.

Praise for Remembered in Bronze and Stone:
“A remarkable look at the many ways we honoured our war dead.”—Canada’s History
“A fine tribute and a call to current and future generations.”—Mark Zuehlke, author of the Canadian Battle Series and Through Blood and Sweat

This year marks the centenary of two pivotal events in Canadian history—one of them weighty, the other an enduring source of delight. In November 1918, the catastrophe of the First World War came to an end. That same year, the first season of the National Hockey League concluded with the Toronto Arenas winning the NHL championship over the Montreal Canadiens. This book with deals the nexus, or collision, between hockey and war.

Unbeknownst to many modern-day fans, thirty players, one referee, and one builder now enshrined in the Hockey Hall of Fame were also soldiers in the Great War. Most of them served in the Canadian Expeditionary Force—the Canada Corps that distinguished itself on the battlefields of Ypres, the Somme, Vimy, and Passchendaele. Four of these men were killed in action. Four were decorated for gallantry. Twenty-seven were volunteers, and five were conscripted under the Military Service Act of 1917. All have remarkable stories. From Rinks to Regiments resurrects the memories of these national heroes and celebrates their contributions on both the ice and the frontlines.

About the Author
Alan Livingstone MacLeod has a lifelong passion for history and hockey. Since retiring from the field of labour relations, he has transformed his passion into writing. He has published two previous books, Remembered in Bronze and Stone: Canada’s Great War Memorial Statuary and From Rinks to Regiments: Hockey Hall-of-Famers and the Great War, and has given a number of public lectures commemorating Canadian efforts in the First World War.
Author profile page >