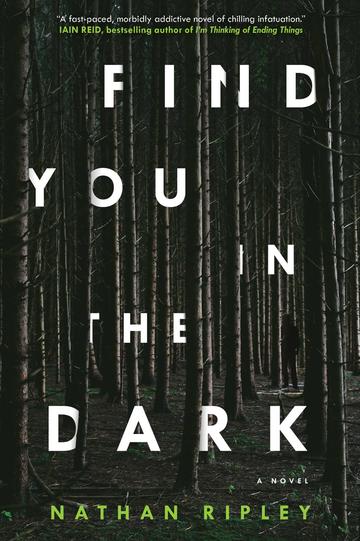 Find You in the Dark

In this chilling debut thriller, in the vein of Dexter and The Talented Mr. Ripley, a family man obsessed with digging up the undiscovered remains of serial killer victims catches the attention of a murderer prowling the streets of Seattle.

Martin Reese is obsessed with murder.

For years, he has been illegally buying police files on serial killers and studying them in depth, using them as guides to find missing bodies. He doesn’t take any souvenirs, just photos that he stores in an old laptop, and then he turns in the results to the police anonymously. Martin sees his work as a public service, a righting of wrongs that cops have continuously failed to do.

Detective Sandra Whittal sees it differently. On a meteoric rise in police ranks due to her case-closing efficiency, Whittal is suspicious of the mysterious caller—the Finder, she names him—leading the police to the bodies. Even if the Finder isn’t the one leaving bodies behind, who’s to say that he won’t start soon?

On his latest dig, Martin searches for the first kill of Jason Shurn, the early 1990s murderer who may have been responsible for the disappearance of his sister-in-law, whom he never met. But when he arrives at the site, he finds a freshly killed body—a young and recently disappeared Seattle woman—lying among remains that were left there decades ago. Someone else knew where Jason Shurn buried his victims . . . and that someone isn’t happy that Martin has been going around digging up his work.

When a crooked cop with a tenuous tie to Martin vanishes, Whittal begins to zero in on the Finder. Hunted by a real killer and by Whittal, Martin realizes that in order to escape the killer’s trap, he may have to go deeper into the world of murder than he ever thought.

About the Author
Nathan Ripley is the pseudonym of Toronto resident and Journey Prize winner Naben Ruthnum. Find You in the Dark, Ripley’s first thriller, was an instant bestseller and an Arthur Ellis Awards finalist for Best First Novel. As Naben Ruthnum, he is the author of Curry: Eating, Reading, and Race. Follow him on Twitter @NabenRuthnum.
Author profile page >
Excerpt

Bella Greene left his apartment for what she knew was going to be the last time. He didn’t know that, would never believe his grip on Bella was so fragile after all the humiliations she’d gone through at his whim, but it was true. She wasn’t going back.
She was outside his apartment building, which she’d left without making eye contact with the concierge. He had a Stalin mustache that was always flecked with brown cigarillo fragments and leered at her when she buzzed up alone, once asking her, “How much?” Bella had spat on his desk, a nice thick gob on the marble. He’d laughed at her and wiped it up.
“Tell him when you go up, see if he believes you,” he’d said. Bella hadn’t bothered.
There was a dry fountain outside the building, turned off some arbitrary day toward the end of summer. Bella walked by it, picking up speed as she got farther from the building. When she was nine, her mom had caught her picking through the change in a fountain for the silver coins. She’d gotten a slap on the arm for that, in front of the other moms and Marianne, her best friend at the time, who betrayed her at the end of the fifth grade to hang out with Kelly Robinson, a tall girl whose parents had cable.
It was well past midnight, not much pedestrian traffic, but a slouching man coming out of a building identical to the one she’d just left smiled at her, and not just politely. Expectantly, like she had an offer for him.
“No,” Bella said, walking past. This was the problem: she’d never gotten to the point of effectively taking back from these guys who constantly wanted to grab from her. Something. Anything. For a while she’d liked the free drinks, then the free drugs, then she found that the longer she stayed around the clearer it was that neither was free. Especially the drugs.
That slouching guy was still following her. It had been half a block, Bella thought. He might just have been walking to his car, but there were eyes on her. She knew that. Had a sense for it. The guy upstairs, he was her first successful use: thought he was getting something out of her, some sort of bizarro sex challenge, but she was just pretending his pathetic desires and fantasies were extreme, going along with them as long as she felt she had to. Bella had needed a place to stay and someone stupid to talk to while she got free of it, the last piece of her old life: the people, the tapering grip of heroin, then methadone, even booze. She hadn’t had anything other than orange pekoe tea for three weeks. She’d shaken it—not just the stuff, but the life. She’d be in San Diego by the end of the week, out of Seattle and ready to invite her mom down for visits. Nice, normal, family visits, with none of the bullshit, the stealing. The lying.
Bella rolled the leaves of her silver bracelet on her arm and felt the eyes on her again, this time from her right. An alley, some sort of truck or big vehicle in the shadows. A man leaning on the fender.
“Keep looking,” Bella called out, walking on, before stopping and turning to face the guy again. He leaned his torso back, out of reach of the light, and laughed a little. Bella walked toward the alley.
“You get off on scaring women? You that kind of creep?” She came a step closer to the guy—he was wide across the chest, tall, his face still hidden. She didn’t expect him to be so fast. Guys that size never were.
There was a pain in her neck as he gripped her by the shoulder and his other hand whipped toward her throat, a feeling altogether unlike the punch she was expecting. Deeper than an insect sting, but the rush of injection afterward was profound, hot, almost calming. She’d never pierced that particular vein before.
Bella Greene didn’t fall to the pavement: the man caught her and lifted her backward, into the dark.

Praise for Find You in the Dark

“A well-crafted crime novel that proves utterly absorbing. . . . with vivid scenes and complex psychology, Find You in the Dark lingers long after the last page has been devoured. And Ripley proves a stellar addition to the Canadian crime novel scene. An addictive debut.”

“A wickedly smart thriller that manages to be both chilling and wry. The page-turning plot . . . is thickened by a great cast of characters and Nathan Ripley’s fantastic eye for detail and dialogue. Just when you think you’ve got a grasp on it, the story twists to new and darker places.”

"Dark and disturbing, Find You in the Dark is a thriller that defies expectations, sporting an original premise and a truly unreliable protagonist."

“A fast-paced book . . . akin to dark British crime TV dramas such as Broadchurch or Luther, satisfyingly sinister and unsettling in their explorations of the violent possibilities of humanity.”

“Ripley . . . has come up with a fresh angle to the serial murder game. . . . Clever and diabolical . . . this unusual debut thriller has a lot going for it.”

“It’s not always easy diving into the mind of an obsessive protagonist, but Martin Reese’s fixation on finding dead bodies makes for one heck of an addictive thriller. Find You in the Dark by Nathan Ripley is an original, inventive take on what happens when you go looking where you shouldn’t. Start reading early in the day, or you’ll be up all night like I was! A standout debut novel.”

— Jennifer Hillier, author of Jar of Hearts and Wonderland

“An unsettling exploration of obsession you won’t soon forget. Nathan Ripley delivers a first novel that fans of Patricia Highsmith psychological thrills and Thomas Harris cat-and-mouse suspense will devour. I certainly did.”

— Andrew Pyper, author of The Demonologist and The Only Child

“Crafty and dark, Nathan Ripley’s novel toys with the lines between predator and prey, his sentences as careful and considered as the crimes he depicts. Ripley is a truly exciting new voice in the thriller world.”