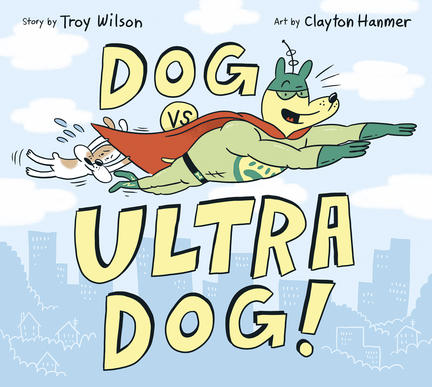 Tim loves his pet dog, Tuffy, and Tuffy adores his boy. Tim also happens to be an überfan of the TV superhero Ultra Dog: he watches the shows, reads the books, plays the video games, wears the cape, and even sports Ultra Dog underwear. Despite cajoling from the neighboring cat, Tuffy has absolutely no fear that Ultra Dog is stealing his boy. Ultra Dog is too famous to want a regular boy…right?

Just in case, Tuffy tries extra hard to be super obedient and to outdo Ultra Dog with his love for Tim. But when Tuffy hears about Tim’s upcoming trip to Ultra Land, the faithful pup is officially afraid of losing his boy. What’s a dog to do? Fight back, of course! Tuffy enacts a plan to beat Ultra Dog once and for all, and the reward is unexpected—but awesome. Packed with comics-style storytelling, visual cues, and action, this is a great pick for reluctant readers, dog lovers, and superhero fans alike.

Troy Wilson was born in Port Alberni, British Columbia, and currently lives in Victoria. Though he is best known as the author of the beloved and best-selling picture book Perfect Man, he has also written numerous kids' stories for Chickadee, Chirp, and Highlights for Children. Troy has given well-received presentations at schools, libraries, bookstores, festivals, and conferences across Canada.

Clayton Hanmer is an illustrator whose crude, energetic comic style has given him a surprisingly broad range of clients from The Globe and Mail to Owl Magazine. He is also the illustrator of The Secret Life of Money by Kira Vermond (Owlkids Books, 2012) and Not Your Typical Book about the Environment by Elin Kelsey (Owlkids Books, 2010). He lives in Port Hope, Ontario, Canada.

"It's slick, sharp, and wildly kinetic."

"[Wilson and Hanmer] create a humorous comics-style story featuring bold illustrations and amusing pop-culture references... Along with the laughs, the tale assures that Tuffy doesn’t need to be ultra-anything, just himself, in order to be loved."

“A familiar story delivered with verve and humour, reminding us that love is not about what you do but who you are.”

“Humorous and endearing, worth sharing with human and furry friends alike.”

"Packed with comics-style storytelling, visual cues, and action, this is a great pick for reluctant readers, dog lovers, and superhero fans alike."

"How can a regular, slobbery, earthbound dog compare with the likes of caped, costumed, flying video-star Ultra Dog? This is Tuffy’s quandary."

Other titles by Troy Wilson

Frosty is a Stupid Name

Other titles by Clayton Hanmer

The Museum of Odd Body Leftovers

A Tour of Your Useless Parts, Flaws, and Other Weird Bits

How and Why Stuff Gets Popular

An Honest Look at Lying

The Secret Life of Money

A Kid's Guide to Cash

Lowdown on Denim, The

Not Your Typical Book about the Environment