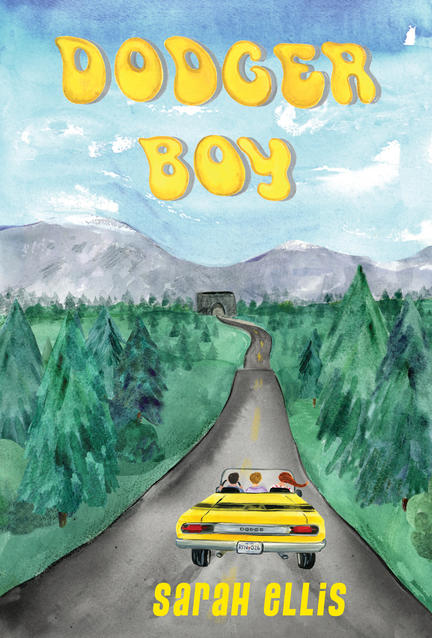 From award-winning author Sarah Ellis comes the story of an American draft dodger who turns up to stay with thirteen-year-old Charlotte and her family.

In 1970 Vancouver, thirteen-year-old Charlotte and her best friend, Dawn, are keen to avoid the pitfalls of adolescence. Couldn’t they just skip teenhood altogether, along with its annoying behaviors—showing off just because you have a boyfriend, obsessing about marriage and a ring and matching dining-room furniture? Couldn’t one just learn about life from Jane Austen and spend the days eating breakfast at noon, watching “People in Conflict,” and thrift-store shopping for cool castoffs to tie-dye for the upcoming outdoor hippie music festival?

But life becomes more complicated when the girls meet a Texan draft dodger who comes to live with Charlotte’s Quaker family. Tom Ed expands Charlotte’s horizons as they discuss everything from war to civil disobedience to women’s liberation. Grappling with exhilarating and disturbing new ideas, faced with a censorship challenge to her beloved English teacher and trying to decode the charismatic draft dodger himself, Charlotte finds it harder and harder to stick to her unteen philosophy, and to see eye to eye with Dawn.

CCSS.ELA-LITERACY.RL.6.3
Describe how a particular story's or drama's plot unfolds in a series of episodes as well as how the characters respond or change as the plot moves toward a resolution.

CCSS.ELA-LITERACY.RL.6.4
Determine the meaning of words and phrases as they are used in a text, including figurative and connotative meanings; analyze the impact of a specific word choice on meaning and tone

CCSS.ELA-LITERACY.RL.6.6
Explain how an author develops the point of view of the narrator or speaker in a text.

Sarah Ellis is one of Canada's most-loved children's writers. A former librarian, she is a highly sought-after children's book reviewer, literary jury member and speaker who lectures internationally on Canadian children's books. She is the winner of the Governor General's Award (Pick-Up Sticks), the Mr. Christie's Award (Out of the Blue and The Several Lives of Orphan Jack) and the Sheila A. Egoff Award (The Baby Project, Back of Beyond and Odd Man Out). Further accolades for Odd Man Out include the prestigious TD Canadian Children's Literature Award, the Dorothy Canfield Fisher Award Master List, ALA Notable Book for Older Readers, Maine State Library Cream of the Crop List and OLA Best Bets - Top 10 Fiction for Children. Sarah Ellis has also won the Vicky Metcalf Award for a Body of Work. Sarah is on the faculty of Vermont College of Fine Arts. She lives in Vancouver, British Columbia.

At that moment Dawn came back. She was with a boy who was just about as opposite from the be-in as you could imagine, a kind of anti-matter of hippie. He had very short, tidy hair shaved up the sides of his head, and he was dressed in crisp jeans and a white T-shirt. He was so clean that he seemed to have a little halo around him. How was he staying so clean?

The second he arrived at the blanket, the sun peeped out.

Later, when Charlotte saw those T-shirts that declared, Today is the first day of the rest of your life, she thought of that moment.

The damp blanket, her muddy toes, the music in her pores, the hippie-sweet air, and the tall, bright-faced Texan.

[Sarah] Ellis introduces the evils of book banning and the importance of believing in yourself and standing up for your own identity.

Ellis’s draft dodger novel is crisp, funny, smart and wonderfully well put together – an example of all that writing for the young can be.

Scintillating prose, rich dialogue, and charming characterizations mark a novel that straddles the boundary between middle-grade and YA. . . . [W]hipsmart . . .

[Charlotte] proves to be a deeply introspective and likable protagonist, offering up insights that cut right to the heart of the coming-of-age experience. . . . A unique piece of historical fiction that packs a punch.

Other titles by Sarah Ellis

As Glenn as Can Be

Ben and the Scaredy-Dog

Dear Canada: A Time for Giving: Ten Tales of Christmas

A+ for Big Ben

The Sky Is Falling

A recommended reading list by Julia Nobel, whose novel is The Mystery of Black Hollow Lane.

New and recent books with buzz.