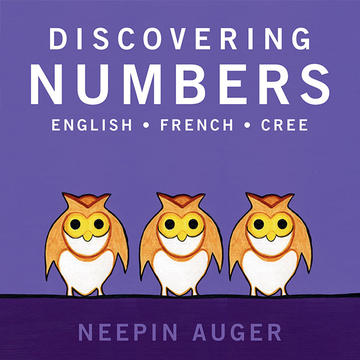 In addition to the English words presented, the French and Cree equivalents are also given, making these some of the most dynamic and useful board books on the market, perfectly suitable for the classroom, library, and nursery.

Neepin Auger is a Cree artist, educator, and mother. Originally from the Bigstone Cree Nation in northern Alberta, she has been painting for over ten years, having studied art under her father, Dale Auger, a renowned First Nations artist and author of the award-winning children's book Mwâkwa Talks to the Loon: A Cree Story for Children.

This small counting board book is uncluttered, colourful, and bold. Each number from 1 to 10 is featured on its own page. The numeral is accompanied by the number word written in English, French, and Cree. The matching pictures use objects or animals important in Aboriginal cultures: one world, two fish, three owls, four feathers, five flowers, six butterflies, seven sweetgrass bundles, eight teepee pegs, nine teepees, and ten arrowheads. A final page compiles all the pictures and labels the objects.

Auger also compiled a companion title, Discovering Words. Though very simple, both books will appeal to beginning readers or students learning English, French, or Cree as a second language. Teachers may also use the illustrations as a springboard to discuss aspects of traditional and modern Aboriginal cultures.—Canadian Aboriginal Books for Schools

Neepin Auger has created a simple board book that illustrates the numbers one to ten and includes the words in English, French and Cree. Bright, simple drawings attract the eye. The subjects are those familiar to Cree children but have universal application. This book and its companion Discovering Words will be useful in preschool and kindergarten classrooms, especially those introducing multiple languages.—Canadian Aboriginal Books for Schools, 2014-2015