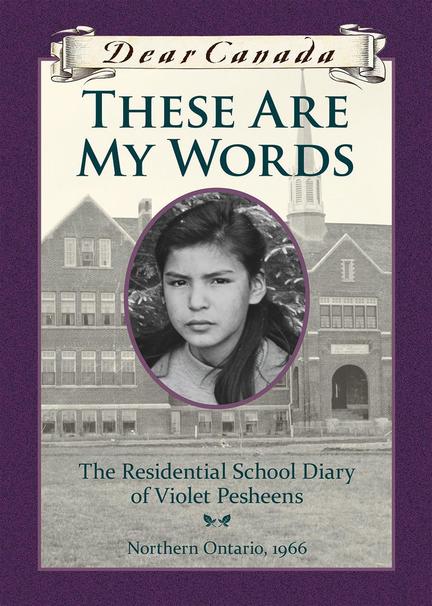 Acclaimed author Ruby Slipperjack delivers a haunting novel about a 12-year-old girl’s experience at a residential school in 1966.

Violet Pesheens is struggling to adjust to her new life at residential school. She misses her Grandma; she has run-ins with Cree girls; at her “white” school, everyone just stares; and everything she brought has been taken from her, including her name—she is now just a number. But worst of all, she has a fear. A fear of forgetting the things she treasures most: her Anishnabe language; the names of those she knew before; and her traditional customs. A fear of forgetting who she was.

Her notebook is the one place she can record all of her worries, and heartbreaks, and memories. And maybe, just maybe there will be hope at the end of the tunnel.

Drawing from her own experiences at residential school, Ruby Slipperjack creates a brave, yet heartbreaking heroine in Violet, and lets young readers glimpse into an all-too important chapter in our nation’s history.

Ruby Slipperjack,
or Ruby Slipperjack-Farrell is a Professor and the Chair of the Department of Indigenous Learning at Lakehead University in Thunder Bay, Ontario. Ruby spent her formative years on her father's trap line on Whitewater Lake. She learned traditional stories and crafts from her family and has retained much of the traditional religion and heritage of her people. Her family later moved to a community along the railway mainline. She went to residential school for several years and finished high school in Thunder Bay.

After graduating from high school Ruby successfully completed a B.A. (History) in 1988; a B.Ed in 1989; and a Master of Education in 1993. In 2005 she completed a Doctoral program at the University of Western Ontario.

Ruby is a member of the Eabametoong First Nation and speaks fluent Ojibway. She uses her maiden name "Slipperjack" when she writes, in honour of her parents and ancestors for the cultural knowledge and teachings that inform her writing. Ruby has retained much of the traditional religion and heritage of her people, all of which inform her writing. Her work discusses traditional religious and social customs of the Ojibwe in northern Ontario, as well as the incursion of modernity on their culture. Ruby is also an accomplished visual artist and a certified First Nations hunter.

Ruby is the mother of three daughters and currently lives in Thunder Bay with her husband and their two shelties.

“Anyone wanting to see an honest reflection of native life as it was and is would do well to start here.” (Honour the Sun)” —CM: Canadian Review of Materials

Other titles by Ruby Slipperjack

Dear Canada: A Time for Giving: Ten Tales of Christmas

A recommended reading list by Julia Nobel, whose novel is The Mystery of Black Hollow Lane.