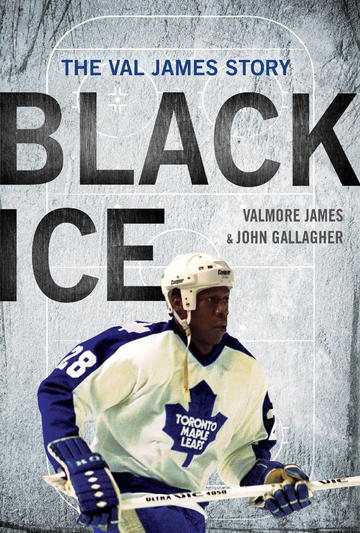 by Valmore James, with John Gallagher

The first black American in the NHL tells his story

Born in central Florida, James grew up on Long Island and received his first pair of skates for his 13th birthday. At 16, James left home to play in Canada, where he was the only black person in junior and, often, in the whole town. While popular for his tough play and winning personality, the teenager faced racist taunts at opposing arenas, and the prejudice continued at all levels of the game. In his two NHL stints, James defined himself as a smart team player and opponent, known for his pugilistic skills.

Black Ice is the untold story of a trail-blazing athlete who endured and overcame discrimination to realize his dreams and become an inspiration for future generations.

John Gallagher is a broadcaster, actor, voice-over specialist, and author. He worked at CityTV for many years, and was host of Gallagher on TSN and co-host of the Q Morning Zoo at Toronto’s best rock Q107. He lives in Toronto.

After nearly 20 years playing junior and professional hockey, Val James settled in Ontario with his wife, Ina. Currently a federal prosecutor, John Gallagher is a former White House Fellow and former New York City police officer. He lives with his family in Pennsylvania.

“Val James’ story is compelling, and surprisingly, not widely known. It’s a story that deserves to be told and appreciated. And now, here it is.” — Bob Costas, broadcaster for NBC and MLBN

“Black Ice is an engaging read that sheds some important light on the subject of racism in hockey. James is an entertaining narrator, and his story is certainly one worth spending some time with.” — Winnipeg Free Press

“James may have been the first African American to play in the NHL, but that’s just a small part of his fascinating story.” — PuckJunk.com

“Black Ice is a fascinating story of an individual who showed tenacity and courage in amassing a lengthy hockey career.” — Sherbrooke Record

“While racism shaped James’ career in some ways — his pugilistic talents were honed while retaliating to the racist taunts spewed by his opponents — and may have inhibited it in others, much of his story is funny and upbeat. Black Ice ultimately is the proud tale of a man who enjoyed almost every moment of his career.” — The Hockey News, Summer 2017