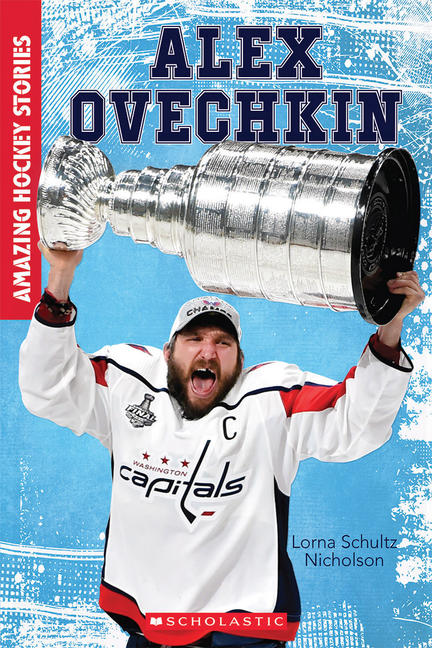 Alex Ovechkin is already the greatest goal-scorer of the 21st century. He holds one of the most famous shots in NHL history, a blazing one-timer from the top of the left circle. Alex was born in Russia to a family of top athletes — none of them hockey players. His path to the NHL came after proving himself with the legendary Moscow Dynamo in the Russian Hockey Super league.

Drafted by the Washington Capitals in 2004, he’s been the anchor of his team ever since. It was a long time in coming, but on June 7, 2018, the Capitals defeated the Vegas Golden Knights and Alex was finally a Stanley Cup champion! Victory was made sweeter when Alex was voted winner of the Conn Smythe Trophy as playoff MVP. “Alexander the Great” is still playing at the top of his game, with a chance to become No. 1 goal scorer in NHL history!

This full-colour, easy-to-read biography is packed with photos and has 16 pages of hockey action comic sequences. It’s sure to be a favourite read with his legions of young fans!

LORNA SCHULTZ NICHOLSON grew up in St. Catharines, Ontario, and as a child loved to read, write and compete in all kinds of sports. She is the respected author of many middle-grade and YA novels, the Puckster picture book series, and several non-fiction books about hockey, including the Amazing Hockey Stories series. Lorna lives in Edmonton, Alberta with her family. Not surprisingly, she is a HUGE Edmonton Oilers fan. Visit her online at www.lornaschultznicholson.com.

D.A. BISHOP always wanted to make comics . . . and now he does! He was born in Montreal, grew up in Brampton and now resides in Pickering, Ontario. He has recently illustrated for the Chapterhouse series True Patriot Presents and writes and draws his own comic series, Of Stone. D.A. Bishop also enjoys oil painting and just hanging out with his wife and two kids. Visit him online at www.renerd.com.

Other titles by Lorna Schultz Nicholson

When You Least Expect It

Other titles by D.A. Bishop

Threat with the Puck