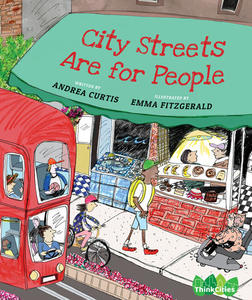 With nearly three quarters of the world expected to live in urban areas by 2050, it’s about time we see more children’s books about living in the city. Kids in New York and Paris, of course, have had their own beloved icons for years (thank you Harriet, Madeleine and CJ from Last Stop on Market Street), but Canadian readers haven’t seen themselves represented in quite the same way. This absence is part of the reason I’ve been working with Groundwood Books on the ThinkCities series.

My third book in this nonfiction series exploring urban systems and sustainability, City Streets Are for People is coming out this week and it’s a kid-friendly manifesto about reclaiming our streets for people and transit, not cars. The series has also looked at city trees and water systems because decoding our environment will help young people live better and advocate for the health and well-being of their communities. It’s also just really fun to see the places you live in the books you read. In that spirit, here are a few titles—both fiction and nonfiction—that take on the urban jungle and its people in all their busy, complex glory.

Small in the City, by Sydney Smith

A young boy travels by himself through the streets of an unnamed but unmistakable Toronto, braving streetcars, deep alleys, cold winds and slush, looking for his lost friend in this gorgeous debut picture book that won Smith both the Governor General’s and the Ezra Jack Keats awards. Toronto children will delight in recognizing familiar landmarks like Kensington Market and the windows of the Red Rocket. 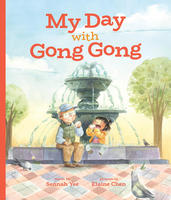 My Day with Gong Gong, by Sennah Yee, illustrated by Elaine Chen

May figures spending the day with her grandfather will be a bore. After all, she doesn’t speak Chinese and Gong Gong doesn’t speak English. But a walk around a vibrant Chinatown builds bridges. The two stop in at a gift shop hanging with toys and knickknacks, for tea at a dim sum restaurant, fish at the market and drop by to visit Gong Gong’s friends playing cards in the park. A heart-warming story of finding connection across culture and generations, the bustling city streets play a key supporting role. 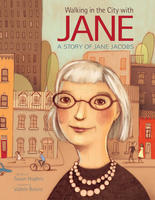 Walking in the City with Jane: A Story of Jane Jacobs, by Susan Hughes, illustrated by Valérie Boivin

The life and times of urbanist pioneer and Canadian transplant Jane Jacobs is illuminated in this fictionalized account of her long fight for strong neighbourhoods and more livable cities. Insatiably curious even as a child, Jacobs was lead by her keen powers of observation to take on the status quo that put cars and roads ahead of people. Inquisitive readers will love to read about how she remained undaunted despite tough opposition. Boivin’s quirky, lush illustrations make the city come to life.

Going Up, by Sherry J. Lee, illustrated by Charlene Chua

When Sophie and her dad are invited to Olive’s birthday party on the 10th floor of their apartment building, they must squeeze in the elevator with a motley crew of neighbours and pets, including the Flores family in their dancing shoes, the (hilariously) tattooed Santucci brothers, and the Habib family, who are carrying Sophie’s favourite dish, gulab jamun. Just when you think the elevator won’t hold another thing, a pair of musicians slip inside with their bass! The whole pack pour out on the 10th floor where readers discover Olive is actually a pampered pink poodle. This sweet story with fun and celebratory illustrations is a wonderful reminder of the joys of urban neighbours. 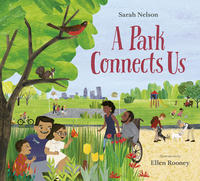 A Park Connects Us, by Sarah Nelson, illustrated by Ellen Rooney

Parks unquestionably make city life better, and this new book filled with colourful collage and a rhythmic text highlights all the ways we use and enjoy them. Filled with active verbs— the park “spins and blows and bounces and rolls us”—and a diverse collection of urban denizens, parents and kids will like reading it over and over. Nelson ends with a note to readers about the history of city parks and encouragement to appreciate and care for the green spaces in our midst. 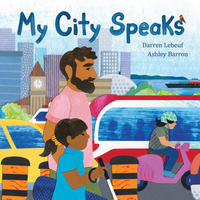 My City Speaks, by Darren Lebeuf, illustrated by Ashley Barron

The city is noisy and fascinating (it “dings and dongs, and rattles and roars”) for a visually impaired girl who navigates the streets with skill, her father in tow. Lebeuf’s poetic language and Barron’s colourful cut-paper collage make this picture book a sumptuous immersion in the sounds (and sights) of city living. The story will help encourage discussions with young readers about what they notice—and don’t—about their own city streets. 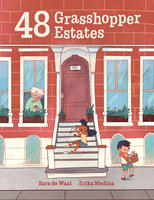 Sicily Bridges is a maker. She makes seven-tailed dragons and a long-distance sailing vessel out of sticks and paper and milk boxes. But when she tries to make a friend in her low-rise apartment building at 48 Grasshopper Estates (where she’d “never seen one grasshopper, or come to think of it, any grass”), she finds her crafting abilities have a limit. This charming story features a cast of characters any city kid will recognize, suggesting the power of imagination to bring people together—and maybe even launch an unexpected friendship. 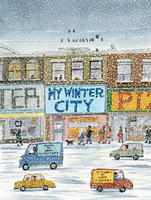 My Winter City, by James Gladstone, illustrated by Gary Clement

I adore this lyrical and stunningly illustrated story about enjoying winter in the city—from a kid’s eye view. A boy, his dad and their dog trudge through the snowy streets, “a soup of salty slushes” and take the reader on the bus, to the toboggan hill, to the park to make snow angels, noticing everything along the way. Kids and their adults will recognize both the beauty and messiness of a city under snow. A total sensory delight.

This interactive nonfiction picture book asks kids to search the fun, diverse illustrations for little details (a grasshopper, a bee, a carpenter’s missing hammer). It imagines a green city, classroom, garden and home where “we take care of all living things. People, plants and animals, too!” From beneath our homes and deep under the ground, urban aviaries to outdoor classrooms, the illustrations offer thoughtful suggestions for how to make our cities more sustainable. Lloyd Kyi ends on an encouraging note, urging kids to dream of a greener tomorrow, with a few suggestions to get the ideas flowing. 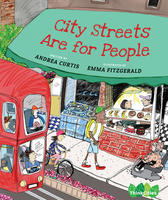 Learn more about City Streets Are for People:

Congested city streets are noisy and thick with cars and trucks, while pedestrians and cyclists are squeezed to the dangerous edges—but does it have to be this way?

This fun, accessible and ultimately hopeful book explores sustainable transportation around the globe, including electric vehicles, public transit, bicycles, walking and more. It invites us to conjure up a city of the future, where these modes are all used together to create a place that is sustainable, healthy, accessible and safe.

Includes a list of ideas for children to promote green transportation in their communities, along with a glossary and sources for further reading.

The ThinkCities series is inspired by the urgency for new approaches to city life as a result of climate change, population growth and increased density. It highlights the challenges and risks cities face, but also offers hope for building resilience, sustainability and quality of life as young people advocate for themselves and their communities.