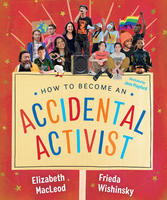 How to Become an Accidental Activist, by Elizabeth MacLeod and Frieda Wishinksy, illustrated by Jean Playford, is organized into ten chapters/ten tips, including: “Find Your Passion; Don’t Accept Things as They Are”; “Notice What’s Needed”; and “Just Get Started.

Lesser known people are featured, such as Jonah Larson, the Accidental Crocheter, who raises money for Ethiopian orphanages like the one he grew up in.

Or the Albertan twin singers Tegan and Sara Quin, creators of the Lego Movie hit, "Everything is Awesome," who sing about LGBTQ+ issues. Will “Egg Boy” Connolly who cracked an egg over an Australian senator’s head during a news conference because the politician blamed mosque attacks on immigration.

From land mines to pink shirt day to Girls Coding to Black Lives Matter to Jane Goodall’s chimpanzees—a smorgasbord of global causes and ages are represented. 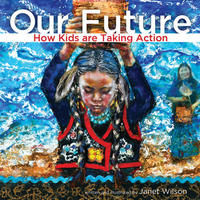 Our Future: How Kids are Taking Action, part of a series by Janet Wilson, takes a deeper dive into young activists, with one profile per page. The kids in this book are making a significant difference. There are the 12-year-old sisters in Indonesia who started a hunger strike to ban plastic bags and were threatened with jail before the governor signed an agreement to make Bali, and then Indonesia, free of plastic bags. There’s the 15-year-old who asked for a plastic-converting machine for his birthday and, three years later, had a business making the strongest bricks and roof tiles in Tanzania. Or the “Elephant Angels,” age 12, who wrote letters which led to the ban of ivory in Hong Kong.

There’s a section at the back of more local efforts: the 9-year-old who petitioned his U.S. hometown ban on snowball throwing and won; the 7-year-old who opened an eco-savings bank in Peru where children bring in recyclables for money deposited directly into their bank accounts; the U.K. teenage boys who wore girls’ uniforms to protest the “no shorts” dress code for girls. There’s also a "What Youth Can Do" section at the end of the book. 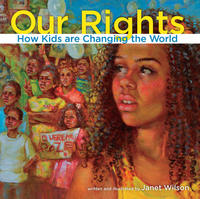 Also in the series, Our Rights: How Kids are Changing the World, begins with the U.N. Convention of the Rights of the Child. Each page highlights one young activist, from India to the Philippines, from the Congo to South Korea, including several Canadians. Each profile paints a vivid picture of that child’s life, for instance, Nujood Ali, age 10 in Yemen (taken out of grade two to marry an abusive man three times her age), had the bravery to go to court to ask for a divorce and to return to school. Or the 15-year-old girl in Brazil who, after a boy was shot in the head while taking out the garbage, organized peace marches which brought about real change to drug cartel street violence. Just like in ‘Our Future,’ there are steps youngsters can take to make a difference. Also in the series: Our Earth: How Kids are Saving the Planet. 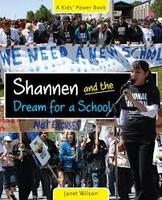 Shannen and the Dream for a School, also by Janet Wilson, tells the true story of Shannen Koostachin, the Northern Ontario girl who raised global awareness of the Attawapiskat First Nations’ fight to get a new school following a fuel spill. From kindergarten to Grade 8, Shannen was schooled in run-down portables from the federal government and instead of the Grade 8 graduation trip to Niagara Falls, Shannen’s class travelled to Ottawa to protest conditions in her community. She became leader of the largest youth-led children’s rights campaign in Canadian history. Shannen died tragically in a car accident before her 16th birthday, but the school she fought for opened four years later. The story, accompanied by photos, is both compelling and inspiring. 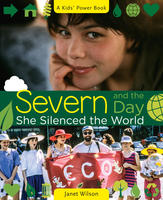 Also by Janet Wilson, Severn and the Day She Silenced the World, is a great read from cover to cover. The biography of Severn Cullis-Suzuki (her father is David Suzuki) begins in Vancouver, with Severn, age 9, playing host to a family from a remote village in the Amazon rainforest, where the inhabitants wear painted patterns on their bodies instead of clothes. Severn and her sister then travel to Brazil, to where the Kayapo people have lived untouched by modern conveniences until only recently. She learns that the tribe depend on the forest for everything, but it is being burnt to make way for farms.

She goes home to start ECO (Environmental Children’s Organization) and learns about the ozone layer, CFCs and issues related to child poverty. The book follows her journey to the UN’s Earth summit in Rio in 1992 where she uses her public speaking skills to impress leaders, including Al Gore. (Some of her powerful speech appears in the book.)

Along the way, child readers will relate to her finding confidence, learning how to raise money, making tough decisions amongst her group of like-minded friends, meeting mentors (like Raffi!) and having supportive parents along the way. The final chapter tells us Severn is now a mother of two children, continuing her environmental activism. The story will make any kid feel empowered to follow his/her own passion.

What causes an activist to become an activist? Key events in the life of an activist are told in the next two titles of the Scholastic Biography Series. 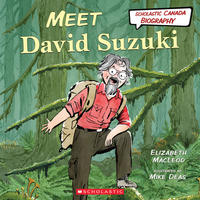 Meet David Suzuki, by Elizabeth MacLeod, illustrated by Mike Deas, begins with David, age 5, being sent with his family to a Japanese Internment Camp. After the war, he grows up in a primarily white town in Ontario. At school he hones his public speaking ability and is nominated high school president. He marries his love of science with a broadcasting career, and builds an audience of like-minded environmentalists. The kid-friendly cartoon style illustrations are distinctive to the series, as is a timeline at the back. 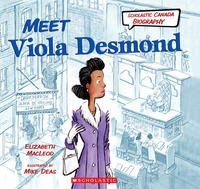 In Meet Viola Desmond, also by MacLeod and Deas, we learn Viola never intended to be an activist. As an independent, strong-minded business woman she opens a beauty salon for black women and develops products specifically for her customers. In the now-famous incident in New Glasgow, Nova Scotia, while waiting to get her car fixed, Desmond goes to the movies and ends up fighting to sit where she wants. Because of the racism she experiences, Viola Desmond spends her life working for justice for black people. Her sister, Wanda, continues the cause after her death. 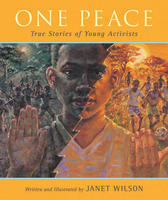 One Peace: True Stories of Young Activists, by Janet Wilson, is an overview of kids who have experienced the atrocities of war and have gone on to make a difference. Drawings, poems, facts, quotes, photos, and letters sit alongside short bios of those involved in a variety of causes: Free the Children; Sadako and her paper cranes; Gandhi; child soldiers; victims of land mines; survivors of bullying; girls’ rights—to name a few—all with a focus on peacemaking. “You say children are the future. But we are the present,” Farlis Calle (Columbian Children’s Movement for Peace) says in one of the quotes—a sentiment running through all these stories of kids who didn’t wait to grow up before trying to change things.