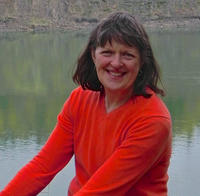 "Moure has crafted a spectacular English poem in conversation with the French—a work channelling science, art, revolution and corporeal movement balanced in stillness and space. It is a thrilling space where meanings are amplified, beauty reverberates and the reader’s expectations are exceeded again and again. Moure advances new possibilities for both Neveu’s poem and translation itself." —2021 GG's Peer Assessment Committee

Erín Moure has published over forty books, including poetry, essays, memoir, and translations/co-translations from French, Spanish, Galician, Portuguese, Portunhol, and Ukrainian. Recent translations: In Leaf by Rosalía de Castro, The Uplands: Book of the Courel by Uxío Novoneyra, and Sleepless Nights Under Capitalism by Juan Gelman. Moure holds two honorary doctorates from universities in Canada and Spain, was a 2017 Creative Fellow at Harvard’s Woodberry Poetry Room, and the 2019 International Translator-in-Residence at Queen’s College, Oxford. Moure lives in Montreal.

Congrats on your Governor General’s Award for Translation, Erín. You’ve had a long and distinguished career, publishing over forty books, including many translations and co-translations. How does it feel to be recognized by your peers at this point in your career?

It’s humbling, precisely, to be recognized by one’s peers and among them; all the translators on the shortlist are stellar, and myriads not on the shortlist as well! It’s a great honour firstly to be received among my peers, and then to be singled out for this recognition. It’s in part because I had the privilege of translating a truly exemplary work, La vie radieuse, by a singular and remarkable poet, with whom I had many conversations, walks, and discussions during the period I was working on the book, and during the period of revisions as well….

I’m just grateful that there IS this award for translation in Canada; it is one of the very few, along with the John Glassco, the QWF’s Cole Foundation Prize for Translation, and the Griffin Poetry Prize, in our country. And we have no support and little acknowledgement and no awards for international translation here, for the language workers who bring works of literature from elsewhere to meet and join our own literature.

To add here too: that I also translate from Galician, in particular the challenging poetry of Chus Pato, nutrifies and enriches my capacities to translate as well from French to English, and from English and Galician to French. I feel in some measure that I share this recognition with the other authors from other languages whom I have the honour of translating.

Can you share one or two of the particular challenges you encountered translating This Radiant Life?

I think I describe this indirectly in the postface to the book: Neveu’s minimalism (which involves the page, spaces, the choreography of turning the page, the intelligence of seeing type and spacing, and not just the words she uses) meant that to best translate her work, to best bring it into English in an integral way, I had to have many conversations and discussions and walks with Chantal (all joyous: to talk with Chantal is to feel life renewed!), which helped me absorb and reflect the rhythms and dynamism and multiplicity of her sources and her pratique, in the same number of very-few-words in English. It awakened my own English and deepened it. I had to consider not just the meanings of words but their resonances and connections with space, rhythm, other words in that space. Chantal Neveu and her multiplicities, her organicism and metabolism in language!

What is key in all language use: listening.

To listen to the words, the sounds, the rhythms and cadences, attend to the structures, and to transport the entire kinesis and kinesiology and acoustics, as well as the semantics, the spatialization, denotations, of the first text through one’s own body (harbour of prejudices and blanks and riches and absences, capacities and incapacities) in a way that allows the closest possible experience of the text in its readerly original to emerge for readers of the translation.

Why is it important for English Canadians to read the translated work of French Canadian writers, and how can this be encouraged?

We open our capacities for thought itself when we read the literary productions of writers from other languages and cultures. The language and cultures (for French is as multiple as English) in French, a language with which Anglo-Canadian speakers share political and social space, values and futures, can only be ignored at our peril. We make ourselves smaller if we do not read multiply across languages.

The language and cultures (for French is as multiple as English) in French, a language with which Anglo-Canadian speakers share political and social space, values and futures, can only be ignored at our peril. We make ourselves smaller if we do not read multiply across languages.

To encourage this? I think the Canada Council block grant system in its evaluation grid of values should give bonus points to presses active in publishing translated works, especially poetry. Bonus publicity funds as well. Our small presses do a remarkable and passionate job and would use these nudges well, of that I am certain.

Anglo-Canadian readerly acceptance of works in translation would be increased if the CC also gave some form of even minimal support to the publication and reception of translations from writers in languages outside Canada as well. It is important for the future of a literature, for its nutrition, to value works from abroad that Canadians select and translate. Neo-Canadian writers find this lack of support especially frustrating as if they cannot share their influences, they experience a muting. And in a future (probably after I am no longer here, as it’s taken so long already and nothing has changed), maybe this will one day happen.

We need as well and concomitantly, to nourish works from Indigenous languages, and be attentive to listening, for the form of these works may not resemble the Western European-influenced forms we are most accustomed to calling “literature.” There are other forms and impetuses to which our dominant culture is completely ignorant and there are writers or bards or orators or thinkers at work bringing these impetuses to us.

Finally, we often speak of a “divide” between English and French, but this is not a reality, it is due to our behaviours in an existing system of constraints. Where I live and work, in my own community and system, there is no “divide” between two languages. There is a multiplicity, and as Chantal Neveu would put it, a mutuality, a reception and giving. I live in a society of primarily French expression that permits many other languages to foment around me: Italian, Romanian, Galician, Spanish, Portuguese, German, Afrikaans, French, English, Guaraní, and more newly and justly, Kanien'kéha, Anishinaabemowin, and others.

We have so many brilliant writers. I learn so much from them. And theatre! Where would I be without theatre? And Galician and US American writers and South American writers…

Excerpt from This Radiant Life

as you can see

a will of steel

it’s no time for divisions

I sit and sing to myself

fear has left us

against the police state