Stuttering, speech writing, the loss of indigenous language, and the power of speaking up — all aspects of oral language addressed in the books on this list. 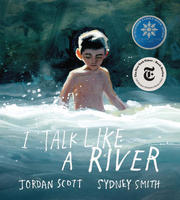 I Talk Like a River is by Jordan Smith, illustrated by Sydney Smith. Beautiful painted images accompany this moving first person narrative of a boy who stutters. His teacher asks the class to make a speech and in order to cope he remembers what his father’s words: “See how that water moves? That’s how you speak.” To prevent himself from crying or avoiding speaking at all, he tells himself: “I also think of the calm river beyond the rapids…. Even the river stutters. Like I do.”

This book is filled with metaphors and similes, such as, “The P in pine tree grows roots inside my mouth and tangles my tongue.” And personification: “When the words around me are hard, I think of the proud river.” (Kindergarten to Grade 6) 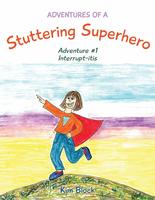 Adventures of a Stuttering Superhero, by Kim Block, illustrated by Cheryl Cameron, is only available as an e-book. Kim Block has written 3 books in the life of Grade 2 student Melissa, a stutterer who likes to teach others how sometimes she has bumpy words, sometimes smooth. In Adventure #1, titled, Interrupt-itis, Melissa is playing with her friends trying to suggest a game. “Do you want to play h-h-h—?” But a boy keeps ending her sentence with “Hula hoop? Hug tag?” Melissa diagnoses him with iterrupt-itus and goes to seek help, but the doctor can’t cure him and the police can’t either (even though the boy has stolen Melissa’s words.)

Finally she talks to her mom about a strategy…she’ll hold up her hand like a stop sign to signal until she’s finished speaking. It works!

There are two more books in the series: Adventure #2 Melissa Meets Her Stamily and Adventure #3 Eye Contact. (Kindergarten to Grade 3)

Speechless, by Jennifer Mook-Sang, is a great read aloud novel for Grades 4-6, particularly for classes is writing speeches.

As the main character, Jelly, goes through the speech-writing process, students will relate to at least one of its many themes: first crush, bullying, being wrongly accused of cheating, rumours, best friend troubles, hidden talents, public speaking fears, volunteer work. Jelly struggles first to find a topic then to calm his nerves while delivering his speech. This one has a very satisfying ending in terms of overcoming a mean classmate. 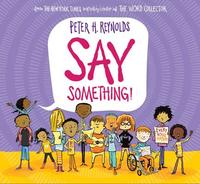 Say Something, by Peter H. Reynolds, is an invitation, a giant affirmation, a reminder of the power of expression —through words, actions or creativity. Whether it’s using a paintbrush, planting seeds, writing a poem, or wearing clothes that convey your style, or situations where you need to speak up, tell an injustice, talk to someone who’s lonely — “to inspire, heal and transform.” Some people are better than others at expressing, the book warns, but everyone has something to say.

The endpapers show a bunch of empty speech bubbles inviting the reader to fill them in. (Kindergarten to Grade 6) 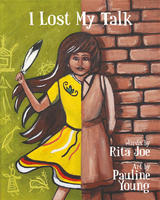 I Lost My Talk, by Rita Joe, illustrated by Pauline Young, begins, “I lost my talk. The talk you took away.”

This is a simple, powerful plea to those who “snatched” away the indigenous language. One impactful phrase per page, and sparse, dark illustrations depict the duality of living in two worlds. The cover, a great provoker of discussion, shows a young girl, split in two—one side shows her indigenous self  with flowing hair, bright yellow dress, holding a feather, next to the residential school girl self, dressed in a drab uniform against a brick wall. The text reads: “Two ways I talk…..Your way is more powerful.”

Kids as young as kindergarten can relate to this book and kids as old as grade six will see the symbolism and meaning beneath the simplicity of the text. It ends with a request: “Let me find my talk/ So I can teach you about me.” (Kindergarten to Grade 6) 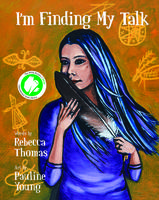 Also illustrated by Pauline Young, I’m Finding My Talk, by Rebecca Thomas, addresses the duality of being indigenous as a second generation survivor of residential schools. “I’m finding my talk/ The one I never had./ The one that the schools/ Took away from my dad.”

Rhyming text presents all the ways in which the protagonist is reclaiming speech, i.e. “I’m finding my talk/ with clumsy feet/ that pat down the grass/with every drumbeat.” Each page illustrates one important aspect of indigenous culture— sewing regalia, smudging ceremonies, taking only what one needs from nature, learning from elders. “It’s how I see the world with not one but two eyes.” (Kindergarten to Grade 6) 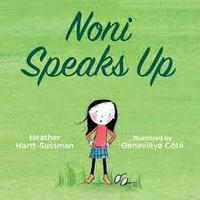 In Noni Speaks Up, by Heather Hartt-Sussman, illustrated by Genevieve Cote, Noni is afraid of confronting her friends when they bully a kid with giant glasses and a funny name. She’s afraid they’ll turn on her, so she says nothing. But she reaches her breaking point when a boy pushes her classmate off a swing. A simple book young children will relate to. (Kindergarten to Grade 3)