Every September since 1997, the Winnipeg International Writers Festival presents THIN AIR, a celebration of books and ideas. Their curated line-up is a perfect fit for curious readers who are ready to discover strong voices and great storytelling in practically every genre. This year, they're presenting a hybrid festival featuring 60 writers, live events, and a dynamic website. 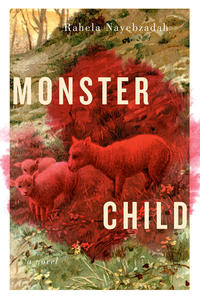 #FreeAfghanistan, #BlackLivesMatter, #EveryChildMatters, and #StopAsianHate are only some of the hashtags that have been taking over social media in the past year or so. And, only recently has there been an interest in BIPOC voices. What took so long? Don’t get me wrong—BIPOC voices are still underrepresented in literature and popular media. But, at least now, as a mother, I don’t have to worry about my children reading books written only by white authors.

When I wrote Monster Child, it was important that I not only appeal to the Afghan immigrant community, but to immigrants in general. The only way I was able to achieve this goal was by reading literature by diverse Canadian authors. Thus, the following books were important to me when writing Monster Child.

The Jade Peony, by Wayson Choy

If there’s any book that inspired me to write Monster Child, it was The Jade Peony, by Wayson Choy.

Like Choy, I wanted to write a novel told from the perspective of children without it being categorized as YA.

What We All Long For, by Dionne Brand

What We All Long For by Dionne Brand alternates between the perspectives of five young friends, who are all defiant and resilient.

The characters all have their own secrets and live their lives fearlessly, regardless of what is expected of them.

The loss of one’s childhood is what I found most intriguing in Andre Alexis’s novel, Childhood.

Told from a child’s perspective, Obasan is about silence, confronting one’s memories, and the haunting of one’s past. The main character, Naomi, is a Japanese-Canadian who is separated from her parents, persecuted and eventually placed in an internment camp.

A Map to the Door of No Return, by Dionne Brand.

A Map to the Door of No Return is both theoretical and poetic. The “door” in Brand’s novel is real, imaginary, and imagined. Although the novel is about the Black Diaspora, the book is a must-read for all diasporas grappling with their own transnational identities.

In a powerful debut novel author Rahela Nayebzadah introduces three unforgettable characters, Beh, Shabnam and Alif. In a world swirling with secrets, racism and a touch of magic we watch through the eyes of these three children as Nayebzadah's family of Afghan immigrants try to find their way in an often uncaring society. But as a sexual assault on thirteen-year-old Beh unleashes the past and destroys the family the reader is left wondering who is the monster child? Is it Beh, who says she is called a disease? Is it Shabnam, who cries tears of blood? Is it Alif, who in the end declares "We are a family of monsters"? Or are the monsters all around us?