But there are bats

and slime molds that sing

who don’t even reach sexual maturity

This is what I want to say

to those who believe

the Earth is already doomed: 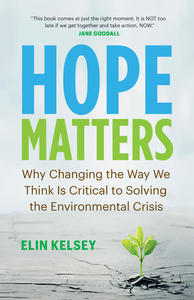 I wrote this book for you—and for the people you love who believe the world is screwed.

I suspect you know who I mean—the ones brave enough to acknowledge the existential angst of living and working through a planetary emergency. We see it in students who appear to have everything going for them yet are so desensitized by environmental despair, they are simply done with feeling; or the ones so saturated with doom-and-gloom messages, they honestly believe no future exists. We hear it in adults grieving for the world their children will live in. We watch it echo around the world through the voices of the million and a half students joining Greta Thunberg in school strikes against climate change.

Whenever I speak about environmental solutions and positive global conservation trends, I encounter people so hungry for hope, they line up to talk to me. They follow up with long, thoughtful emails telling me they honestly believe the state of the planet is past the point of no return. They express incredulity that hope could exist.

What is clear from these conversations is that more of us are aware of the very real and urgent environmental problems we face than ever before; more people care and are ready to take action, and our worries about these issues are profoundly impacting our lives. According to the American Psychological Association, climate change has far-reaching effects on our mental health: it triggers stress, depression, and PTSD, strains our personal and community relationships, and leads to increases in aggression, crime, and violence, to name but a few of these effects.

My journey into this issue began in earnest in 2008, when I led a series of workshops at the United Nations Environment Programme’s Children’s Conference on the Environment in Stavanger, Norway. I met with children between the ages of 10 and 14, from 92 different countries. When I asked them, What words or feelings come to mind when you think about the environment? I was overwhelmed by their expressions of fear, anger, and despair.

Kids take their cues about the state of the planet from adults and the media. Ironically, the ways in which we talk about the environment—chronicling its demise, making threatening forecasts about the future, blaming others, framing things in terms of “never” and “always,” and telling others what they should do—parallel the dysfunctional ways we so often communicate in our most intimate relationships. Curating the bad stuff into a display of hopeless futures is just as useless when it comes to engaging people with the planet as it is with affairs of the heart. Badgering someone you love to change will not fix things. Nor can we save the world by continuing to focus on what people are doing wrong.

Yet the narrative of gloom and doom continues to dominate how we think, feel, and relate to the environment the world over. That’s because so many people fear that focusing on solutions could unintentionally fuel complacency or give politicians an out, or that we might champion a solution that isn’t letter-perfect. So we continue to reproduce this culture of hopelessness in spite of the mounting evidence of how damaging it is to our personal health and well-being—and to our collective capacity to respond to urgent environmental issues...

Somehow, we’ve got urgency, crisis, and fear all balled up.

Somehow, we’ve got urgency, crisis, and fear all balled up. Environmental issues are real, and they are at the level of global crises. But failing to separate the urgency of these problems from the fear-inducing ways in which we communicate them blinds us to the collateral damage of apocalyptic storytelling. We grow deaf to more inspiring and effective possibilities. By hammering children and adults with issues at scales that feel too large to surmount, we inadvertently cause them to downplay, tune out, or shut down. We are fueling an epidemic of hopelessness that threatens to seal the planet’s fate. The environmental crisis is also a crisis of hope...

In these pages, I argue that hope for the environment is not only warranted but essential to addressing climate change, biodiversity loss, and the full suite of environmental crises we face. By focusing our attention so heavily on what’s broken, we are reinforcing a starting-line fallacy that makes it feel as if nothing useful has ever been accomplished and that all the hard work lies ahead. We need to pry ourselves free from this disempowering rhetoric and situate ourselves within the positive environmental trends that are already well established and yielding the successful results we need to grow...

By focusing our attention so heavily on what’s broken, we are reinforcing a starting-line fallacy that makes it feel as if nothing useful has ever been accomplished and that all the hard work lies ahead.

For years, I would ask every scientist I met what made them feel hopeful about the environment. They always had an answer. I mistakenly thought that the only way to increase exposure to under-reported successes would be for me to interview these folks and gather examples one by one. Luckily, in April 2014, I met Patrick Meier, a pioneer in the rapidly developing world of digital humanitarianism, while we were fellows together at the Rockefeller Foundation’s Bellagio Center in Italy. When he described how he mobilized the Haitian diaspora after the 2010 earthquake to create and interpret a crisis map for rescue workers from the tweets, text messages, emails, and Facebook posts coming from people on the ground, I began to imagine ways we might use social media to gather specific cases of environmental successes from all over the planet and to make them easily shareable. We could try to crowdsource hope.

The result was #OceanOptimism, a social media campaign designed to crowdsource and share examples of ocean conservation successes and solutions. We launched it on World Oceans Day in June of 2014, and to the surprise of our tiny group behind the campaign, the tag went viral, reaching more than ninety million shares to date. Within seconds of logging onto Twitter or Instagram, users see current accounts of ocean successes: whales returning to New York City harbor, or the resilience of corals on a damaged deep-sea reef off Scotland. They find inspiring surprises, like the discovery of 200,000 cold-water coral reefs off the coast of Norway, or the recovery of groundfish along the California coast—some populations rebounding fifty years sooner than predicted.1

Knowing what works matters. These social media feeds make searching for replicable solutions or finding people working on similar issues much easier, which translates into successful actions being reproduced and tailored to other situations. And daily exposure to posts of conservation successes changes how people feel about the state of the planet. These successes empower us. Innovations and positive feelings, in turn, spread...

The tired old narrative of doom and gloom can no longer capture the changing global dynamics of life on planet Earth. The constant harkening back to fear does not serve us.

Far from keeping us from growing complacent, fear drives apathy. Indeed, there is growing concern that framing climate change as an impending catastrophe stokes the fires of “climate doomism”—the fatalistic belief that it is already too late to act, which, according to researchers, causes people to give up. And conversely, when we act from a positive feeling of meaning and purpose, we all benefit. In 2013, in the first study of its kind, medical researchers demonstrated that the happiness we derive when we act on behalf of the greater good shows up in our cells as a healthier immune response.

Hope Matters is a timely, evidence-based argument for the place of hope and a celebration of the turn toward solutions that is emerging in the face of global crisis and despair. I hope you will share it with the people you love.

Adapted and excerpted from Hope Matters: Why Changing the Way We Think Is Critical to Solving the Environmental Crisis, Elin Kelsey ©2020. Published by David Suzuki Institute and Greystone Books. Reprinted with permission of the publisher.

Fears about climate change are fueling an epidemic of despair across the world: adults worry about their children’s future; thirty-somethings question whether they should have kids or not; and many young people honestly believe they have no future at all.

In the face of extreme eco-anxiety, scholar and award-winning author Elin Kelsey argues that our hopelessness—while an understandable reaction—is hampering our ability to address the very real problems we face. Kelsey offers a powerful solution: hope itself.

Hope Matters boldly breaks through the narrative of doom and gloom to show why evidence-based hope, not fear, is our most powerful tool for change. Kelsey shares real-life examples of positive climate news that reveal the power of our mindsets to shape reality, the resilience of nature, and the transformative possibilities of individual and collective action. And she demonstrates how we can build on positive trends to work toward a sustainable and just future, before it’s too late.

“This book comes at just the right moment. It is NOT too late if we get together and take action, NOW.” —Jane Goodall

Fears about climate change are fueling an epidemic of despair across the world: adults worry about their children’s future; thirty-somethings question whether they should have kids or not; and many young people honestly belie …