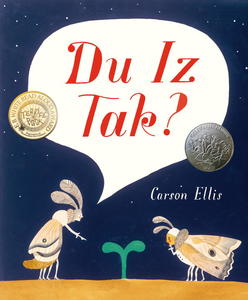 In all areas of the language curriculum, students wrestle with questions—both direct and indirect. As readers, writers, speakers, listeners and viewers, questions help us make connections and facilitate higher level thinking. Most of these picture books use direct questions.

Du Iz Tak? by Carson Ellis, is told entirely through dialogue in a made-up language. A lone plant sprout attracts the attention of surrounding bugs. “Du iz tak?” one character asks. “Ma nazoot,” the other responds. (Roughly translated: “What is that?” “I don’t know.”) The bugs wake up their friend Icky, who has a ribble (ladder) to investigate the growing plant, but a voobeck (spider) appears. A bird eats the spider, but the excitement doesn’t disturb the thriving gladdenboot (flower). Seasons change, the gladdenboot dies, snow comes and the whole cycle begins again, with a ta ta (sprout) in the spring. This one begs to be read aloud with multiple voices and varied intonation—a fun way to tackle the oral language curriculum, whilst discussing what’s happening. (Kindergarten to Grade 6) 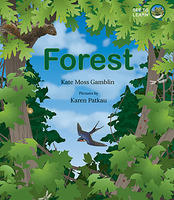 Forest, by Kate Moss Gamblin, illustrated by Karen Patkau, brings the concept of sustainability to young readers. Simple questions require deep thinking in this text, eliciting connections with time (past and future), place, and scale (micro and macro). It relates nature’s parts to the whole, and invites imagination. “Do you see the moss-covered stump of this ancient tree, old in the time of your grandparents’ grandparents, returning to the earth. Do you see alongside it, a caterpillar inching up a young sapling, both still becoming?” (Kindergarten to Grade 6) 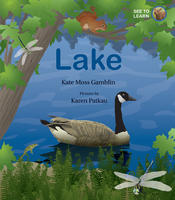 Similarly, in the second book in the See to Learn series, Lake, also by Kate Moss Gamblin, illustrated by Karen Patkau, provocative questions gently nudge the reader toward scientific principles. “Do you see how the wind, ruffling the water and our hair, over time shapes the pine growing at lakes’ edge?” And “Do you see the morning mist rising to clouds, as it does above lakes the world over, later returning as droplets of snow?” Each page brings a new question. Gamblin writes in the afterword: “Our imaginations are solution innovators,” something she says we need to practice. (Kindergarten to Grade 6) 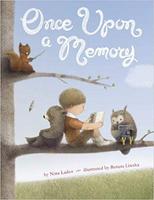 Once Upon a Memory, by Nina Laden, illustrated by Canadian Renata Liwska, is a poem, with each page posing a question: “Does a feather remember it once was a bird? Does a book remember it once was a word?” Its lyrical rhyming text prods the reader to think about ‘before and after,’ the origins of things, transformations. Soft illustrations create a feeling of meditation for readers both young and old. This format might inspire question poetry. (Kindergarten to Grade 6)

Small in the City, by Sydney Smith, starts off like a graphic novel with wordless panels, setting up the question of point of view. A small girl rides a streetcar then walks through a chaotic city with her backpack. “I know what it’s like to be small in the city,” she says. After a handful of pages, the text reveals a first person narrator talking to someone. “I know you. You’ll be alright. If you want, I can give you some advice.” She warns the mysterious “you” to stay away from dark alleys, barking dogs, and reveals good hiding places. Who is the narrator talking to? Clues eventually lead the reader to a LOST CAT flyer nailed to a post. An ambiguous ending invites more questions. (Kindergarten to Grade 3)

These next three books are aimed at kindergarten. 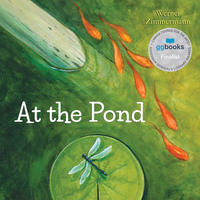 In Werner Zimmerman’s, At the Pond, the underlying question is, “What’s in the pond?” A bird’s eye view of a pool of water reveals water lilies, some frogs, a salamander, several water striders. This beautiful counting book prompts the reader to take notice of what changes in the pond. What new creatures appear? What new growth is seen in the lily? A dramatic climax involves a visit from a heron. 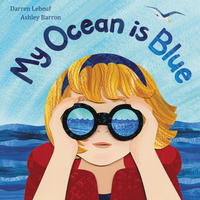 My Ocean is Blue, by Darren LeBeuf, illustrated by Ashley Barron, leaves the reader asking, “What colour is my ocean?” It’s a rumination on a beach’s changing nature: slimy, sandy; appearing, disappearing (tides); sparkly, dull. It’s also a perfect lesson on description, adjectives and opposites. 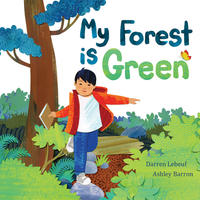 My Forest is Green, the second in the series by Darren LeBeuf, illustrated by Ashley Barron, takes a different tack. We see a boy looking out his apartment window at the treetops below. “This is my forest,” he says. Then we see a playroom full of drawings and natural treasures. “Well, actually this is my forest,” the text reads. The boy creates tree bark rubbings, rock sculptures, sketches and collages of all his findings. Following a similar pattern to the previous book, this one also works as a mentor text for adjectives, encouraging the question, “What’s your forest like and how would you show it?”

A 2017 Caldecott Honor Book
The creator of Home turns a droll eye to the natural world, with gorgeous art and a playful invented language.

Du iz tak? What is that? As a tiny shoot unfurls, two damselflies peer at it in wonder. When the plant grows taller and sprouts leaves, some young beetles arrive to gander, and soon—with the help of a pill bug …

A See to Learn Book

Forest: A See to Learn Book is the first book in a series of non-fiction picture books for very young children, using lyrical phrasing to encourage a sensitive perception of the natural world and a caring connection with it.

Through gentle questions, the text asks young readers to consider what they see and experience in the forest through the seaso …

Lake: A See to Learn Book

Lake: A See to Learn Book, the second book in the See to Learn series, is designed to inspire scientific curiosity, appreciation of beauty and connection to the natural world, through gentle questions and vibrant illustrations.

Lake: A See to Learn Book is the second title in a series of non-fiction picture books for very young children that uses l …

Small in the City

The first picture book that the award-winning Sydney Smith has both written and illustrated is a story about feeling small in the city — and finding your way home.

On a snowy day in a big city, a little boy hops off a streetcar and walks through downtown, between office buildings, through parks and down busy streets. Along the way, he provides hel …

A stunning new picture book that serves as a spectacular meditation on the wonders of nature.

From Werner Zimmermann, the bestselling and award-winning illlustrator of Pippin the Christmas Pig and A Porcupine in a Pine Tree,comes a new book featuring lush artwork and spare text about life in the wild.

My Ocean Is Blue

A young girl's poetic exploration of the enchanting ocean she loves.

“This is my ocean,” the young girl begins as she heads over the dunes with her mother. Then, as they pass the whole day at the seaside, she lyrically describes her ocean in simple, sensory detail. It's both “slimy” and “sandy,” “sparkly” and “dull.” It has wonde …

My Forest Is Green

With art supplies in tow, a young boy explores the urban forest near his home, then interprets what he sees with his art. The boy is a keen observer who uses poetic, rhythmic language to describe the diversity he finds through all four seasons. His forest is both “fluffy” and “prickly,” “dense” and “sparse,” “crispy” and “soft …