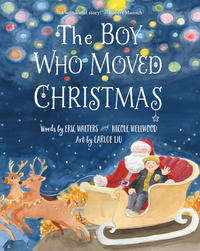 The Boy Who Moved Christmas is a beautiful story of a community coming together to grant the wish of a young boy battling cancer. It brings about the spirit and magic of the holidays—in October.

When Evan and his family are told by doctors that his brain tumour is no longer treatable, Evan creates a list of things he wants to do. Included on that list is his wish to celebrate one more Christmas. As word spreads around the community, everyone contributes to making the most amazing Christmas parade imaginable. Thousands of people, hundreds of floats, and a visit from one special person make it a Christmas everyone will remember forever.

Towards the end of his battle, Nicole promised Evan to continue his fight against childhood cancer. As well as starting Evan’s Legacy, she feels that sharing his story through this book is another way to keep the fight going. Nicole hopes it helps other families who have dealt with, or are currently dealing with similar tragedies. The town still speaks warmly of Evan and there are pictures of him in many stores and restaurants. People are not afraid to say his name, and this is one important message that Nicole hopes will come from sharing Evan’s story.

When Eric Walters heard about Evan’s story, he took it upon himself to contact Nicole. Initially, their conversations were simply about Evan. Over time, it became clear to Eric that this was a special story that needed to be shared. He wants readers to learn about Evan’s Legacy and to understand that others are fighting the same battle. There is a lot of good in our world, and this story is sure to inspire young readers everywhere. Upon reading it, one cannot help but be filled with a sense of hope and love.

Working together to make sure every detail was just how Evan would have wanted (as well as receiving approval from his brothers), Eric and Nicole, along with illustrations by Carloe Liu, have written a wonderful book that every child needs to read, or have read to them. It truly is a magical story that would be perfect to read as a family at any time of the year. 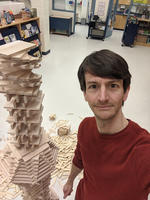 Since jumping at the opportunity to become a Teacher-Librarian, Geoffrey Ruggero has transformed the Learning Commons at a Maple Public School into a modern learning space. His passion for reading and making inspires students to bring their learning to life in many unique ways.