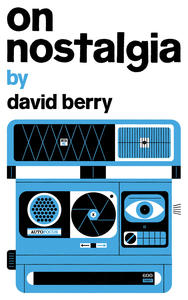 Today we're launching David Berry's book On Nostalgia, a history of nostalgia—which is no small thing! Tobias Carroll writes at Literary Hub, "[Berry] pulls off the impressive feat of covering plenty of ground in a concise and compelling manner."

It’s a cultural history of nostalgia, an examination of why and how we’re so ceaselessly drawn back.

Someone who has never met a Wikipedia hole they couldn’t fall in.

Among others, I’d hope it’s in conversation with writers like FT Marinetti, Jaron Lanier, Eric Hobsbawm, Barbara Tuchman, Steven Pinker, Bill Bryson and every tech CEO who has written a thinkpiece or memoir, although I would certainly not claim that all those conversations are polite or respectful.

What is something interesting you learned about your book/ yourself/ your subject during the process of creating and publishing your book?

What’s your favourite anecdote that didn’t make it into the book?

It never quite fit with what I was trying to explain, but numerous studies have shown that if you ask virtually anyone what the best time in the history of the world was, or when the best music was released, or when the best movies were being made, or what the peak of their particular country’s history—basically any variation on that question—everyone responds with, essentially, the time when they were between the ages of about 12 and 23. So, when they were a teenager, or maybe in college. You can prime them to try to think objectively about it, say by asking them about important historical figures or moments, but even when people are made aware of those, if you ask them straight-up when the best time to be alive was, they will, to an overwhelming degree, argue that everything peaked when they had no meaningful responsibility and were just discovering what emotions really felt like. Humans are absurd, solipsistic, hopelessly lost things, and god love them for that.

Humans are absurd, solipsistic, hopelessly lost things, and god love them for that.

It’s probably just because I deeply, deeply miss being able to be in them, but I would like to take this time to acknowledge public libraries. Keepers of knowledge, reasonably liberal with hold/renew/return policies and one of the last places in the world that will let you be without making you constantly buy things, neither my career nor this book would have ever been possible without you.

I recently finished Anakana Schofield’s Bina, which gave my head the violent and necessary rewiring all of her books do. I would very much like to read Pasha Malla’s Kill the Mall when it is actually released, malls being a subject very near and dear to my recently-returned-to-Edmonton heart.

From Mad Men to MAGA: how nostalgia came to be and why we are so eager to indulge it.

From movies to politics, social media posts to the targeted ads between them, nostalgia is one of the most potent forces of our era. On Nostalgia is a panoramic cultural history of nostalgia, exploring how a force that started as a psychological diagnosis of soldiers fighting far from home has come become a quintessentially modern condition. Drawing on everything from the modern science of memory to the romantic ideals of advertising, and traversing cultural movements from futurism to fascism to Facebook, cultural critic David Berry examines how the relentless search for self and overwhelming presence of mass media stokes the fires of nostalgia, making it as inescapable as it is hard to pin down. Holding fast against the pull of the past while trying to understand what makes the fundamental impossibility of return so appealing, On Nostalgia explores what it means to remember, how the universal yearning is used by us and against us, and it considers a future where the past is more readily available and easier to lose track of than ever before.

From Mad Men to MAGA: how nostalgia came to be and why we are so eager to indulge it.

From movies to politics, social media posts to the targeted ads between them, nostalgia is one of the most potent forces of our era. On Nostalgia is a panoramic cultural history of nostalgia, exploring how a force that started as a psychological diagnosis of soldie …