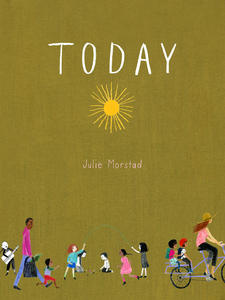 Lists are used in different contexts. The Writing curriculum for Grades 1-6 asks students to identify different purposes for writing, to generate ideas, and to write short texts using simple forms. Lists are one of these forms. Similarly, in the Reading curriculum, students are asked to understand the use of different text features, such as lists. The following picture books are useful mentor texts.

Today, by Julie Morstad, is packed full of choices and to-do lists. The illustrations are detailed and child-like, laid out like a pictorial menu. (Even the book’s large size resembles a menu.) It begins: “What should I do today? Where should I go? Should I stay close to home or go far away? But first, what’ll I wear?” There are hairstyles for the day, breakfast choices, possible activities, ways of travel, flowers to pick. The text is full of quiet surprises. i.e. a page is devoted to a single choice: “…maybe you’d like to be in the middle of a quiet, heavenly nowhere, talking with the minnows?”

About the book: Every day is full of endless possibilities— especially TODAY!

The simplest moment has the potential to become extraordinary in this beautiful book by Julie Morstad. From getting dressed, to having breakfast, to choosing ways to go, Today has a little something to delight everyone. 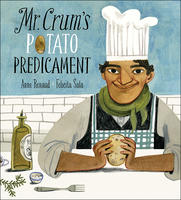 Mr. Crum’s Potato Predicament, by Anne Renaud, illustrated by Felicita Sala, is the story of George Crum, the inventor of potato chips. At times it reads like an inventory of food terms. “George Crum loved to cook. He fricasseed and flambeed, boiled and braised, poached and pureed.” The end shows another kind of list—a menu: “stewed skunk in sassafras sauce, pickled possum pancakes and grilled groundhog en croute.” This book also works as a mentor text for alliteration and adjectives and new (culinary) vocabulary.

About the book: When Filbert P. Horsefeathers walks into George Crum's restaurant, he tells the waitress, “I have a hankering for a heaping helping of potatoes.” Fine cook that he is, George prepares a serving of his most scrumptious, succulent and sublime potato wedges, only to have Filbert send them back. “Too thick,” he says. So, George makes thinner wedges. But his picky customer sends them back again. And again. Feeling a bit mischievous, George decides to use his sharpest knife to cut paper-thin potato slices, which he fries until they are crackling and then showers with salt. At last, Filbert is satisfied, proclaiming, “Perfection!” Which they are. Because, quite by accident, George Crum has invented potato chips! This fictional picture book tale by Anne Renaud is based on a real man named George Crum, a cook in Saratoga Springs, New York, in the 1850s, who is purported to have created the first potato chip in response to a demanding customer. Included at the back of the book is a historical note with a list of sources describing the legend and the remarkable and inspiring story of Crum, a trapper of mixed Native American and African American descent, who supplied restaurants with fresh game, then became a chef and successful restauranteur himself. Felicita Sala's gorgeous illustrations accurately portray the historical period but with a lighthearted touch. They work beautifully with Renaud's playful language and quirky characters for a lively and deliciously fun read-aloud. This book is an excellent choice for lessons on inventions and inventors, history, or why we eat the foods we do. 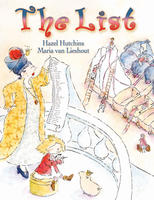 The List, by Hazel Hutchins, illustrated by Maria van Leishout, is the story of a Queen collecting marvels for a new royal baby. Her daughter, Princess Cassidy, who has just learned how to print the alphabet, also makes a list of necessary items. The queen needs eight wagons pulled by elephants for the search through mountains, desert and jungle, gathering food, jewels, and exotic animals. Cassidy needs only her small bundle to gather what is on her tally—two kisses and a hug—the very thing that makes the baby smile.

A little princess makes the greatest of gifts from the simplest of lists.

When a neighboring kingdom announces the birth of a royal baby, the Queen of Iddison is thrilled. "We shall bring the child splendid gifts," she declares, and then makes a long list of treasures to collect on the way. She smiles as her daughter, little Princess Cassidy, makes a list, too.

On the voyage, the Queen checks her list as the royal caravan gathers gems from mountain mines and beasts from deep jungles. Princess Cassidy also checks her list, but collects nothing.

At last, the royal caravan arrives laden with riches. But it is only the gifts from Cassidy's list that make the baby smile its first smile. And the Queen smiles too when she reads it: two kisses (X X) and one hug (0). 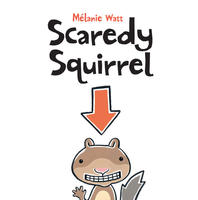 Scaredy Squirrel, by Melanie Watt, includes many kinds of inventories: fears, items needed, schedules. The neurotic list-maker, afraid to leave the safety of his tree, is afraid of: poison ivy, killer bees and sharks. Prior to leaving home, he records the pros (“great view, plenty of nuts) and cons (“same old view, same old nuts”) of never leaving his home. He goes on to make a tally of emergency items for his kit (hard hat, parachute and sardines to distract the sharks).

About the book: Scaredy Squirrel never leaves his nut tree. It's way too dangerous out there. He could encounter tarantulas, green Martians or killer bees. But in his tree, every day is the same and if danger comes along, he's well-prepared. Scaredy Squirrel's emergency kit includes antibacterial soap, Band-Aids and a parachute.

Day after day he watches and waits, and waits and watches, until one day ... his worst nightmare comes true! Scaredy suddenly finds himself out of his tree, where germs, poison ivy and sharks lurk.

But as Scaredy Squirrel leaps into the unknown, he discovers something really uplifting ... 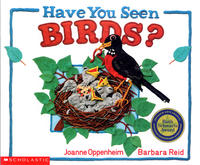 Joanne Opennheim, in the classic Have You Seen Birds?, illustrated by Barbara Reid, and Have You Seen Bugs?, illustrated by Ron Broda, present rhythmic, rhyming catalogues. In the former, Reid’s modelling clay renderings sit alongside text which could serve as a lesson in verbs, adjectives and the difference between the two parts of speech: “Walking-upside-down birds, acrobatic clown birds, darting, drilling, piping, trilling. Listen—hear the warble of the wild wood birds!” (Or a lesson in alliteration and sound words.) “Have You Seen Bugs?” has some great examples of descriptive text and similes: “Dark as bark, green as grass” or “sleek as a needle, furry as a bear.”

About the book: Like many of nature's wonders, birds are often taken for granted. But these birds won't go unnoticed! Spring, summer, autumn and winter birds, woodland, meadow, sea and marsh birds—all are brought to life in lively, lyrical prose and rich plasticine-relief illustration. Colour and movement abound in every word and every detail, making each bird memorable.

The Liszts, by Kyo MacLear, portrays a delightful family of obsessive list-makers. Each person uses lists for different purposes—interests, fears. The protagonist, Edward, has the longest with an inventory of questions. This is the uber mentor text in terms of inspiring creative list-writing. It might also launch a philosophical discussion on the value of list-making in our lives, particularly when a stranger enters their lives and shows them a different way to live.

About the book: The Liszts make lists. They make lists most usual and lists most unusual. They make lists in winter, spring, summer and fall. They make lists every day except Sundays, which are listless. Mama Liszt, Papa Liszt, Winifred, Edward, Frederick and Grandpa make lists all day long. So does their cat. Then one day a visitor arrives. He's not on anyone's list. Will the Liszts be able to make room on their lists for this new visitor? How will they handle something unexpected arising? Kyo Maclear's quirky, whimsical story, perfectly brought to life with the witty, stylish illustrations of Júlia Sardà, is a humorous and poignant celebration of spontaneity. 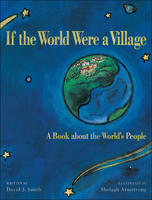 If the World Were a Village, by David J. Smith, illustrated by Shelagh Armstrong, offers a paradigm where an imaginary village of 100 people represents 72 million in the real world. “Go down into the valley and walk through the gates. Dawn is chasing away the night shadows. The smell of wood smoke hands in the air. A baby awakes and cries. Come and meet the people of the global village.” Each page addresses one characteristic of the village, such as nationalities, and provides information in list form. “Of the 100 people in the global village: 60 are from Asia, 15 are from Africa, 9 are from South America, 10 are from Europe, 5 are from Canada and the U.S.” Statistics in list-form make for easy reading and easy comparison of the numbers. It covers languages (only 9 in the village speak English!), ages, religions, food, money, education, etc. It even addresses how fast the village has grown; in 500 BCE, 2 people lived in the now 100-person village. This book is a great junior resource for list-making and list-reading.

About the book: The 2nd Edition of the best-selling book which has sold over 400 000 copies in 17 languages—updated with new content and insights about the world's people. First published to wide acclaim in 2002, this eye-opening book has since become a classic, promoting "world-mindedness" by imagining the world's population—all 6.8 billion of us — as a village of just 100 people. Now, If the World Were a Village has been newly revised with updated statistics, several new activities and completely new material on food security, energy and health. By exploring the lives of the 100 villagers, children will discover that life in other nations is often very different from their own. If the World Were a Village is part of CitizenKid: A collection of books that inform children about the world and inspire them to be better global citizens.

2016 Alcuin Awards for Excellence in Book Design winner (Children's, tie)
2017 BC Book Prizes' Christie Harris Illustrated Literature Prize finalist
Every day is full of endless possibilities - especially TODAY!
The simplest moment has the potential to become extraordinary in this beautiful book by Julie Morstad. From getting dressed, to having bre …

A little princess makes the greatest of gifts from the simplest of lists.

When a neighboring kingdom announces the birth of a royal baby, the Queen of Iddison is thrilled. "We shall bring the child splendid gifts," she declares, and then makes a long list of treasures to collect on the way. She smiles as her daughter, little Princess Cassidy, mak …

Tell Me a Story: Have You Seen Birds?

Have You Seen Bugs?

If the World Were a Village

A Book about the World’s People

The 2nd Edition of the best-selling book which has sold over 400 000 copies in 17 languages — updated with new content and insights about the world's people. First published to wide acclaim in 2002, this eye-opening book has since become a classic, promoting "world-mindedness" by imagining the world's population — all 6.8 billion of us — as a …