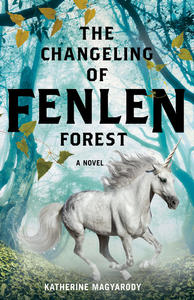 The Changeling of Fenlen Forest is the debut novel by Katherine Magyarody, the story of a girl who tracks her lost unicorn fawn into a strange land where people thing she is a changeling who too closely resembles a missing girl. Can Elizabeth find her fawn and solve the mystery of her doppelgänger?

In this list, Magyarody shares other titles in which misfits find adventure.

Adventures don’t just happen to princesses and Chosen Ones…they also happen to lone wanderers and misfits at the edges of villages. These books take readers into gripping, taut stories where the heroes navigate strange worlds and tight-knit communities, often discovering strange animals along the way (and not just the human kind).

The Dollmage, by Martine Leavitt

The old Dollmage ("wise woman") of Seekvalley needs an heir. To protect her village, she watches over a set of dolls who must be carved and cared for and interpreted…but her power is weakening. Although she predicts the day her heir is born, she does not know if the destined child is Annakey or Renoa. The Dollmage chooses Renoa, but as the girls grow, Annakey begins to develop magical skills. The Dollmage refuses to recognize Annakey’s talents, and then when the valley is threatened, which girl will save her community?

In Seekvalley, Leavitt crafts a world that is isolated but rich. Annakey’s struggles as an outcast and as the victim of sexual violence grounds her magical quest in real-world issues.

This heartbreaking and tough fantasy grounds its suspenseful plot in Slavic folklore. Plain Kate is blessed with the ability to shape wood into wondrous shapes, but after her father dies, the villagers suspect her of witchcraft. When Linay, a mysterious tinker, enters town and offers to buy Kate’s shadow for her heart’s desire, she agrees…only to discover that her deal endangers not only the village, but the entire countryside.

In pursuit of Linay, Kate encounters the wandering Roamer people, a rusalka, and a wise-cracking, magical cat. Bow represents the cultures of both agrarian towns and Roamer caravans with subtlety and without exoticization, indicating layered systems of polytheistic folk culture, modern religion, and community norms.

The Keeper of the Isis Light, by Monica Hughes

Olwen has been the only human on the planet Isis for sixteen years. With only her robotic Guardian as company, she has learned to treasure her isolation and the harsh environment—but now settlers are arriving. Her fear gives way to curiosity, though, when she spots young Mark London. Though Guardian requires her to wear a protective suit and mask, Olwen nevertheless befriends Mark and feelings between them begin to grow. But Olwen starts to realize that her years alone on the planet might have fatal consequences for her ability to join the newcomers. Can they understand and accept her? Olwen’s bond with Mark and the fate of her plume-tailed alien pet, Hobbit, ultimately affects her relationship with the settler community.

After suffering years of abuse by her father on the lost planet of New Half-Way Tree, Tan-Tan murders him and runs away. Hiding out in an alien village and wracked with guilt and rage, Tan-Tan takes on the persona of the Robber Queen who swoops in to right injustice. But she must contend with her avenging stepmother, Janisette, and also a pregnancy she does not want.

Hopkinson interweaves and innovates upon Caribbean folklore in the planets of New Half-Way Tree and Toussaint. This science-fiction universe uses the history and culture of the African diaspora to ground the technology and the nature that Tan-Tan navigates, with Granny Nanny as an embedded, internet-like consciousness, and naming alien species after mythological beings like "douen."

When he accompanies his father to southern France, 15-year-old Ned Marriner isn’t expecting to get caught up in a love-plot that ends in human sacrifice. But he begins to have visions of the place’s bloody past—a past determined by the ancient and beautiful Ysabel. Throughout the centuries, Ysabel has shaped history by drawing the violent love of warring men and though the outcome changes, the story is always doomed and always demands blood. Ned must draw on his friends and family to stop the cycle of violence once and for all.

This swashbuckling adventure takes readers to an alternate reality where airships rule the skies. When cabin boy Matt Cruse rescues a damaged air balloon, he discovers a dying explorer who speaks of hidden island and mysterious winged creatures. A year later, Matt meets Kate de Vries, the explorer’s granddaughter, who is determined to discover the truth.

Will Matt risk his job on board the Aurora to help her? Pirates, typhons, hidden islands, lost adventurers abound. Matt Cruse is like Jim Hawkins of Treasure Island, except that he is paired with the resourceful and intrepid Kate. Like Jim, Matt and Kate brave nature and steal ships under the noses of formidable, charismatic enemies. Oppel creates an effortlessly multicultural crew and makes the world an almost-recognizable version of the early 20th century.

Awake and Dreaming, by Kit Pearson

In this subtle tale of alternate realities, lonely and neglected Theo longs for the magical “world” of a perfect family. When Theo befriends the Kaldor children on a ferry, she wishes she could be part of their family. And suddenly, inexplicably, she is. Gone is her panhandling mother, Rae, and the embarrassment of school. Her life with the Kaldors is strangely perfect…until she finds herself, equally suddenly, back with her less-than-perfect mother and aunt. When she meets the Kaldors again, she must find out the mystery of her other life…and face the supernatural being who has been playing with her memories. Pearson’s understated prose allows her to present younger readers with a palimpsestic, fantastical plot and the difficulties of living on the margins in Victoria, B.C.

Of Two Minds, by Carol Matas and Perry Nodelman

Princess Leonora of Gepeth can make the things she imagines come true…but she’s supposed to keep her mind on reality. Prince Coren of Andilla can read people’s thoughts…but he can’t protect his own. Their parents decide these two troublemakers should get married. What could possibly go wrong?

With a runaway princess and a compassionate prince as the protagonists, Matas and Nodelman riff gleefully off of fairy tales convention. The first book in a series, Of Two Minds provides readers with both fun and food for thought.

When Keturah gets lost in the forest ringing her village, she has the misfortune to meet Lord Death. Desperate to keep her life, Keturah begins a storytelling game that interests Death enough to give her one more day. If she can find true love in those last hours, she can have her life back…but can she save her village from an oncoming plague? And can she resist Death’s own dark beauty? The story, told in Keturah’s voice is spare, precise, beautiful.

About The Changeling of Fenlen Forest:

Elizabeth thinks she knows the gloomy Fenlen Forest. But when her treasured unicorn fawn, Sida, goes missing, Elizabeth tracks her into a strange land where the people think Elizabeth is a changeling, a malignant being who too-closely resembles a missing girl. If Elizabeth can find her fawn and uncover the fate of her lost double, can she stop the fear from turning into hate? To solve the deepening mystery, Elizabeth befriends a handsome, skeptical young shepherd whose stories hint at a dark secret lurking at the forest's edge, and tame a herd of wild unicorns with the ability to unlock the past.

The Changeling of Fenlen Forest

Finalist - Sunburst Award Elizabeth thinks she knows the gloomy Fenlen Forest. But when her treasured unicorn fawn, Sida, goes missing, Elizabeth tracks her into a strange land where the people think Elizabeth is a changeling, a malignant being who too-closely resembles a missing girl. If Elizabeth can find her fawn and uncover the fate of her lost …

Plain Kate lives in a world of superstitions and curses, where a song can heal a wound and a shadow can work deep magic. When Kate's village falls on hard times — crops fail, and even Kate's father falls victim to a deadly fever — the townspeople look for someone to blame, …

An ethereal tale set in an illustrious and ancient corner of the world, Ysabel is a remarkable achievement by one of Canada's most celebrated storytellers.

The Cathedral of Saint-Sauveur of Aix-en-Provence is from a bygone age. Complex and full of secrets, it is the perfect monument for a celebrated photographer to shoot. For his teenaged son, Ned M …

Winner of the Governor General’s Award, a Michael L. Printz Honor Book, and recipient of many other national and international honours, Airborn fired the imaginations of readers around the world when it was first published in 2004 and its popularity has never …

Theo and her young, irresponsible mother seem trapped forever in their miserable, poverty-stricken life … but Theo can’t stop dreaming of belonging to a “real” family. When she is mysteriously adopted by the large, warm Kaldor family, her dream seems to be coming true. But as time passes, the magic of Theo’s new life begins to fade, and s …