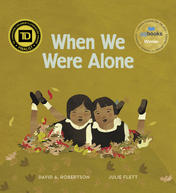 Created by kileyturner
tagged: Children's fiction, illustration, GGs
These are the books that have won Governor General's Literature Awards for children's text and children's illustrated fiction from 2012–17.

When We Were Alone

When a young girl helps tend to her grandmother’s garden, she begins to notice things that make her curious. Why does her grandmother have long, braided hair and beautifully coloured clothing? Why does she speak another language and spend so much time with her family? As she asks her grandmother about these things, she is told about life in a res …

Tokyo lives in a small house between giant buildings with his family and his cat, Kevin. For years, highways and skyscrapers have been built up around the family’s house where once there were hills and trees. Will they ever experience the natur …

In this wordless picture book, a little girl collects wildflowers while her distracted father pays her little attention. Each flower becomes a gift, and whether the gift is noticed or ignored, both giver and re … 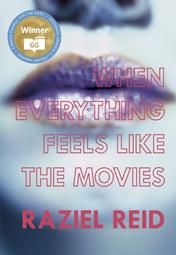 An edgy and extravagant YA novel about a glamorous boy named Jude.

School is just like a film set: there's The Crew, who make things happen, The Extras who fill the empty desks, and The Movie Stars, whom everyone wants tagged in their Facebook photos. But Jude doesn't fit in. He …

Winner of the Governor General's Award for Children's Illustration

Rose and Windy are summer friends whose families have visited Awago Beach for as long as they can remember. But this year is different, and they soon find themselves tangled in teen love and family crisis. From the creators of Skim comes an investigation into the mysterious world of …

Thirteen-year-old Henry's happy, ordinary life comes to an abrupt halt when his older brother, Jesse, picks up their father's hunting rifle and leaves the house one morning. What follows shatters Henry's family, who are forced to resume their lives in a new city, where no one knows their past. When Henry's therapist suggests he keeps a journal, at …