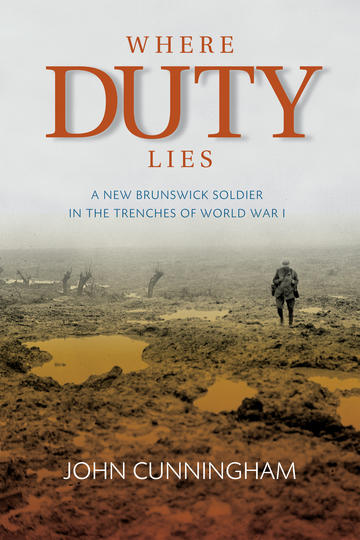 A New Brunswick Soldier in the Trenches of World War I

Frank Grimmer did not set out to earn honours on the field of battle nor did he readily choose to go to war. World powers were shifting. The future of nations was deemed dependant on their armies. It was left to the young men to face the gunfire of other young men who could have been friends under the right circumstances and in times of peace. Where Duty Lies tells the story of how a 23-year-old St. Andrews, New Brunswick, man ended up in the quicksand-like mud of Passchendaele labouring under heavy artillery fire helping construct supply lines that supported the Canadian advance during the Third Battle of Ypres, often referred to as the most horrific in a war of horrific battles.

Frank's call to the trenches came as the guns pounding Vimy Ridge could be heard on the coast of England. Eager to prove himself, he volunteered to join the battle force badly cut down during Canada's warfare with the Germans in France. Here he found himself often deprived of the guns and ammunition to advance or defend himself. But with the other "pioneers" he stayed on the job amidst the blasts of high explosives.

In the hours leading up to the launch of the Canadian assault on Passchendaele Ridge, Frank, thrown several yards by an artillery blast, went on to do all in his power to "render aid" to the wounded and those who died. His bravery earned him the Military Medal—and a thousand nights of torment remembering the violence of the events.

About the Author
John Cunningham was a journalist with the Saint John Telegraph-Journal and The Evening Times-Globe during the 1960s and 1970s. His stories have appeared in many regional and international magazines. He currently lives in Bridgewater, Nova Scotia.
Author profile page >