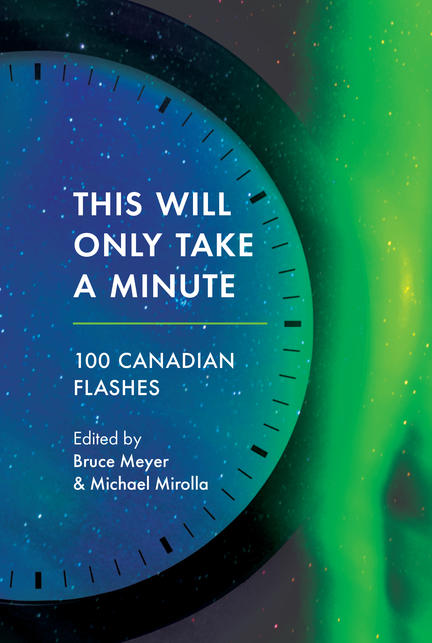 Brevity is the soul of wit, as William Shakespeare wrote in one of his longer plays, Hamlet. Flash Fiction, brief stories, have become one of the most exciting sub-genres of contemporary fiction. In This Will Only Take a Minute: Canadian Flash Fiction, Guernica Editions features short short stories by Canadian writers from six words to 500 words in length, short stories from across the entire spectrum of Canadian writing. and anything from stark realism to speculative fiction.

From 1996 to 2003, he was Director of the Writing and Literature Program at the University of Toronto School of Continuing Studies where he created and managed programs in Creative Writing, Professional Writing and Literary Studies. In 2000, he gave the annual Whidden Lecture at McMaster University, a distinction previously bestowed on Robert J. Oppenheimer, Hans Selye, Tom Stoppoard and Bruno Bettelheim. He is currently Artistic Director of the annual Leacock Summer Festival of Canadian Literature in Orillia, Ontario. A frequent broadcaster on CBC Radio One, his conversations, The Great Books (three volumes), A Novel Idea, andGreat Poetry: Poetry is Life and Vice Versa with Michael Enright are the network’s best-selling audiocassette and cd spoken word series. He has also been a regular literary personality on TV Ontario’s More to Life.

In addition to his teaching and broadcasting activities, Meyer has published twenty-seven books of poetry, fiction, non-fiction, textbooks and anthologies, and critical monographs. His poetry collections are The Open Room (1989), Radio Silence (1991), The Presence (1996), Anywhere (2000), The Spirit Bride (2002), Oceans (2004), and As Yet, Untitled…(2006), and he has published three poetry chapbooks, The Tongues Between Us (1981), The Aging of America (1982), and with James Deahl and Gilda Mekler, Steel Valley (1984). He has published two collections of short fiction: Goodbye Mr. Spalding (1996) and Flights (2005). With Barry Callaghan, he co-edited The Selected Poems of Frank Prewett (1997 and 2001), and the first anthology of World War One Canadian writing to be published since 1918, We Wasn’t Pals: Canadian Poetry and Prose of the First World War (2001). With Jonathan Barron, he co-edited The Dictionary of Literary Biography, Volume 282: The New Formalism (2005), and with Carolyn Meyer he co-edited The Reader: Contemporary Essays and Essay Strategies (2004) and Separate Islands: Contemporary British and Irish Poetry (1988). His other works include two volumes of interviews with Canadian writers co-authored with Brian O’Riordan, In Their Words: Interviews with Fourteen Canadian Writers (1985) and Lives and Works: Canadian Authors in Conversation (1991).  With James Deahl, he co-edited the first edition of Poetry Markets for Canadians  (1984). His other works include Arrivals: Canadian Poetry (1986), The Bae Sah Moh Anthology: Young Korean Canadian Writers (2007), and an edition of James Hanley’s The German Prisoner (2007).

He has contributed to numerous scholarly reference volumes including The Oxford Companion to Canadian Literature (1983, 1997), The Oxford Companion to Twentieth Century Poetry (1996), Contemporary Poets (1993), Literature in English (1996), and Poetry for Students (1997, 1998, 1999). He has worked as an editor for Descant, Quarry, Cross-Canada Writers’ Quarterly, Poetry Canada Review, Argo (UK), The Greenfield Review (US), Edge City Review (US), The University of Toronto Review, and Acta Victoriana.

Meyer has won several prizes for his writing including the E.J. Pratt Gold Medal and Prize for Poetry (1980, 1981), the Alta Lind Cook Award for Writing (1981, 1982), the Ruth Cable Memorial Prize (1996), the Word Press Prize (2004), the Daesan Foundation International Prize for Translation (2006) and was a finalist for the Bridport Prize (2005), the Gerald Lampert Award (1989) and the T.S. Eliot Prize for Poetry (2000). His work as bibliographer for the website for the CBC’s Canada: A People’s History was part of the Baedeck Award-winning package for the best educational website. He was recipient of a Toronto Arts Council Award (2006) and an Ontario Arts Council Works-in-Progress Grant (2005), as well as numerous Ontario Arts Council Writers’ Reserve Grants. During his doctoral work he was a recipient of the Ontario Graduate Fellowship, the Social Sciences and Humanities Research Council of Canada Doctoral Fellowship, the McMaster University Graduate Fellowship, and the McMaster University Graduate Travel Fellowship. He is one of only two living Torontonians to be quoted on a Heritage Toronto marker, that to mark the site of the city’s first baseball stadium, Sunlight Park. In 1997, he received an honorary lifetime donor’s pass to the Baseball Hall of Fame and Museum in Cooperstown, New York.

He lives in Toronto with his wife Kerry and daughter Katie.

The author of a clutch of novels, plays, film scripts and short story and poetry collections, MICHAEL MIROLLA describes his writing as a mix of magic realism, surrealism, speculative fiction and meta—fiction. Publications include the novel Berlin (a 2010 Bressani Prize winner); The Facility, which features among other things a string of cloned Mussolinis; and The Giulio Metaphysics III, a novel/linked short story collection wherein a character named "Giulio" battles for freedom from his own creator.
Other publications include the short story collection The Formal Logic of Emotion; a punk novella, The Ballad of Martin B.; and two collections of poetry: Light and Time, and The House on 14th Avenue (2014 Bressani Prize). His short story collection, Lessons in Relationship Dyads, from Red Hen Press in California, took the 2016 Bressani Prize. The novel Torp: The Landlord, The Husband, The Wife and The Lover, set in 1970 Vancouver during the War Measures Act, was published in 2016 (Linda Leith Publishing). 2017 saw the publication of the magic realist short story collection The Photographer in Search of Death (Exile Editions). A novella, The Last News Vendor, published in the fall of 2019 (Quattro), received a Readers' View, Reviewers' Choice Award. A speculative fiction collection, Paradise Islands & Other Galaxies (Exile Editions), was published in the fall of 2020. The short story, "A Theory of Discontinuous Existence," was selected for The Journey Prize Anthology; and "The Sand Flea" was a Pushcart Prize nominee. In the fall of 2019, Michael served a three—month writer's residency at the Historic Joy Kogawa House in Vancouver, during which time he finished the first draft of a novel, The Second Law of Thermodynamics. Born in Italy and raised in Montreal, Michael now makes his home in Hamilton. For more information, http://www.michaelmirolla.com/index.html.